Three of the Pikachu are “remakes” of old cards with updated artwork and attacks:

Base Set Pikachu has been redrawn by its original artist, Mitsuhiro Arita. It now shows Caterpie, Butterfree, Parasect, and Oddish in the artwork. The cheeks on Pikachu have been changed to red. They were originally yellow on the Japanese card. Early English prints recolored the cheeks to red, but then switched back to yellow for later prints.

Pikachu V-UNION features illustrations by 25 different Pokemon TCG artists in their distinct styles. This includes original TCG artists Mitsuhiro Arita, Atsuko Nishida, and Kagemaru Himeno. As most fans know, Atsuko Nishida is the original designer of Pikachu and has continued to illustrate cards for the past 25 years.

25th Anniversary Collection will release on October 22nd. It will feature 28 cards (before secret rares). All of the cards will be holo.

As posted before, the set will also see the release of a “25th Anniversary Edition” promo booster pack containing one of 25 reprinted cards from the TCG’s history. Venusaur was previously revealed and now Birthday Pikachu has been too.

You will receive the promo pack when you purchase four booster packs of 25th Anniversary Collection from Pokemon Center stores. The reprinted cards feature a 25th anniversary stamp, new holofoil paper, a different set ID and card number, and modern copyright information. They also feature some of the “texture” found on secret rares in modern sets.

We will get all of the above cards in our Celebrations set this October.

The special “25th Anniversary Golden Box” we previously announced will feature four Pikachu reprints. The gold Pikachu V is an alternate art reprint of the new Pikachu V from the main set.

Here are translations for all the new cards: 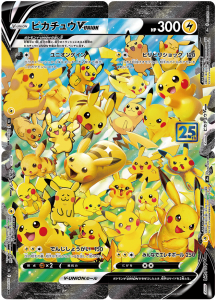 How to play a Pokemon V-UNION: Once per game during you turn, combine 4 different Pikachu V-UNION from your discard pile and put them onto your Bench.

[C] Union Gain: Attach up to 2 [L] Energy cards from your discard pile to this Pokemon.

[L][L][C] Disconnect: 150 damage. Your opponent can’t play any Item cards from their hand during their next turn.

When your Pokemon V-UNION is Knocked Out, your opponent takes 3 Prize cards.

When your Pokemon VMAX is Knocked Out, your opponent takes 3 Prize cards.

[L][C][C] Max Balloon: 160 damage. During your opponent’s next turn, prevent all damage done to this Pokemon by attacks from Basic Pokemon.

When your Pokemon VMAX is Knocked Out, your opponent takes 3 Prize cards. 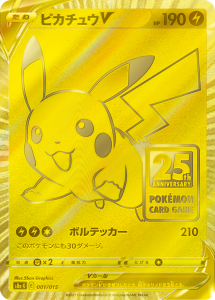 Member
I want that full art base set Pikachu
And the number of the cards are funny. Some are /015 and others /028 nevermind
J

Member
WHAT?!?!? These are UNREAL!! The variety of Pikachus is amazing!
J

Member
And once again, I LOVE the idea of remixing the old style cards (Birthday Pikachu) with the modern-day texturing!

Member
Thought about the VMAX ones because of the number of the cards. Awesome!
M

Member
I am SO in love the Pikachu V-Union art! It's like 25 years of Pikachu all in 4 cards T_T
The reprints are beyond amazing too, can we do this every 5 years from now on?

Updated with the other attack
J

Member
Wha, FLYING AND SURFING CHONKY-CHUS?!?!? Everyone, remain calm! They did NOT just drop the greatest VMAXs to date!

Should I start making the Set List for Celebrations mini set?

Member
The birthday Pikachu is absolutely amazing. Great holo style. I didn't even know that card existed, I only knew the Surfing and Flying ones.

"During your opponent’s next turn, prevent all damage done to this Pokémon by attacks from Basic Pokémon."
Effect text is exactly the same as S1H(SSH) Obstagoon's Obstruct attack.
Last edited: Jul 13, 2021

EM-isthmus said:
"During your opponent’s next turn, prevent all damage done to this Pokémon by attacks from Basic Pokémon."
Effect text is exactly the same as S1H(SSH) Obstagoon's Obstruct attack.
Click to expand...

Member
Okay TCG experts, can we identify all of the artists featured on Pikachu V-Union?

The easy ones for starters:
-Bottom left is Kagemaru Himeno
-Above the 25th logo is Kouki Saitou
-Below the logo is Tomokazu Komiya
-Dead center is Mitsuhiro Arita
-Ooyama is obvious lol

Frost said:
Okay TCG experts, can we identify all of the artists featured on Pikachu V-Union?

The easy ones for starters:
-Bottom left is Kagemaru Himeno
-Above the 25th logo is Kouki Saitou
-Below the logo is Tomokazu Komiya
-Dead center is Mitsuhiro Arita
-Ooyama is obvious lol
Click to expand...

They're all listed here: https://www.pokemon-card.com/ex/25th/pikachu/

Member
On a somber note, I am sorry to see Midori Harada did not/did not get to contribute to the V-UNION card. I assume her relationship with the TCG is complete. I would've loved to see her on this card as a parting gift to her fans. Still, I wish her the best!

To the Pikachus at hand, though, I'm sure some will look at the number of Pikachu cards here with trepidation - the more slots he takes up in the showcase sets, the less your favorite gets a chance to shine! - but it's hard to thing imagine anyone better to use to celebrate the franchise. I for one love any attention the Surfing/Flying chus get, though I do wish they'd stuck with the Aoki artstyle.


Not a fan of V-UNION as a card format, but this assembly of all these different artists - even Komiya, bless - is such a thoughtful celebration of the series, and certainly will be the most interesting thing they're going to do with the V-UNION template. The hype builds!
Last edited: Jul 14, 2021