Hello PokeBeach readers! Isaiah here, and I’m happy to be bringing you another Standard Format article!

Last time, we talked about Dragonite V and its role in the Expanded format, and shortly after that article was published, the largest Expanded event of the Black & White to Evolving Skies format was hosted — to nobody’s surprise, Dragonite V did exceptionally well, placing in the Top 4 where it lost to Rowlet and Alolan Exeggutor-GX / Vileplume which is one of the deck’s only true auto-losses.

Today, however, is not about Expanded. Instead, we will be talking about the growing strength of two Lightning-type Pokemon in the Standard format; Jolteon VMAX and Zeraora V.

What’s the Draw of Jolteon and Zeraora?

In the current Standard format, few decks have made as drastic of an impact as the various decks that feature Water-type Pokemon, but in particular, Suicune V partnered with Ludicolo has become one of the most popular decks in the Standard format, being the deck with the fifth-highest usage in online tournaments (and its weekly usage is on the rise). Naturally, as decks grow more popular, people try to counter them, and with Suicune V’s Lightning Weakness many players have looked to Jolteon VMAX and Zeraora V, among others, to take advantage of this popular Weakness. 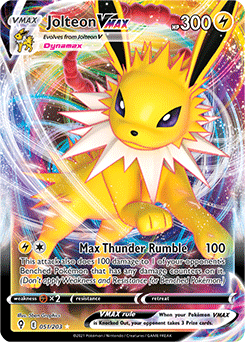 The immediate question that comes to mind, however, is to wonder why Jolteon VMAX or Zeraora V over something like Pikachu VMAX or Tapu Koko VMAX . The answer to this question also lies within the way the meta works, and that is the abundance of the Inteleon line in the Standard format. With so many decks relying on the Inteleon line, there are a ton of support Pokemon on the Bench (Bench sitters) in the format, which means more Pokemon that are vulnerable to spread attacks. If there is a high number of Bench sitters then spread decks generally do better, which is where Jolteon VMAX and Zeraora V come in; between the Weakness and the number of Bench sitters, the Standard format has created a space where both decks can thrive.

The Weakness factor can be flipped around at these Pokemon, however. Both Pokemon can struggle with their Fighting-type Weakness thanks to the growing popularity of both Rapid Strike Urshifu VMAX and Houndoom / Single Strike Urshifu V. As a result, both of these Lightning Pokemon are prevented from being the absolute top decks of the format, but at the same time, the massive number of favored matchups against Inteleon-based decks is good enough to keep them around the top. With that said, let’s take a look at Jolteon VMAX, which I believe is definitely one of the top five decks in the format.

Jolteon VMAX has underwent one of the more bizarre transitions of being considered good to bad to good that I have ever seen. When it was revealed, a lot of people thought that it would be insane due to the cheap Energy cost of Max Thunder Rumble along with the inherent strength of doing 100 damage to two of your opponent’s Pokemon. Shortly after, however, the practicality of Jolteon VMAX in the format was brought into question as Rapid Strike Urshifu VMAX picked up in the earliest stages of the format, but as time went on, Rapid Strike Urshifu VMAX was pushed back a bit by the likes of Dragapult VMAX. This brings us to the third (and most current) phase of Jolteon VMAX. As of right now, Jolteon VMAX is at one of its stronger points. Despite its glaringly problematic Fighting matchups, Jolteon VMAX is able to easily take advantage of the decks that are built to beat those Fighting decks, giving it a pretty solid position in the format. In fact, I would make the stretch to call the deck the best deck in format if Fighting decks simply did not exist.

Recently, I have taken a significant liking to Jolteon VMAX in particular. I’ve played it to a couple of online events, and have seen a little success. In my stronger result, a top 16 at a 100 person event, my run was only cut short by poor luck hitting one of two Single Strike decks in the pool of nine different decks that I could have played against in the top cut. As of now, I think this deck list is one of the strongest Jolteon VMAX lists out there, built to better survive the two-hit Knock Out metagame thanks to a boosted Cheryl count, among other things.

A 4-3 line of the attacking Pokemon VMAX. How original!

To nobody’s surprise, we run a 4-3 line of Jolteon VMAX in this deck. Being the main attacker, it is critical that we can find it easily (that’s also why we play four Evolution Incense!), but three happens to be the perfect amount where there is not an excessive number of copies of the card such that it clogs up your hand, but it is enough that you do not jeopardize your ability to win the game if you have to discard or prize a copy. 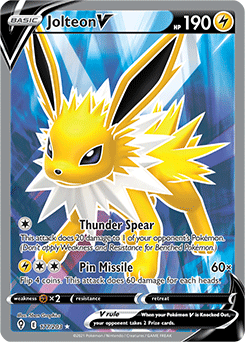 As I’ve already explained, Jolteon VMAX’s strength comes from its ability to cheaply and efficiently string together powerful spread attacks, setting up powerful multi-Prize turns while crippling engines like the Inteleon line in the process. Although this strategy is extremely simple and the damage output is a bit low when compared to decks that are doing 250 damage at a time, it is incredibly effective at doing what it wants to every single game.

We play four copies of Jolteon V for similar reasons, but considering how critical it is to find the V on your first turn, you absolutely have to play four copies to make sure it happens. Jolteon V also has two decent attacks. The first of these, Thunder Spear, offers a nice way to set up the effect of Max Thunder Rumble for the following turn, and since it only costs one Colorless Energy the requirement can be filled by Capture Energy, which is a nice touch.

Jolteon V’s second attack, on the other hand, is one of the most volatile attacks in the game. While using Pin Missile seldom comes up, it offers a crazy option for sudden burst damage when the opponent is only expecting a hit for 100 damage. For example, I was once playing against a Rapid Strike Urshifu VMAX deck and, after doing 100 with Max Thunder Rumble, I used Pin Missile and got lucky enough to hit four Heads, taking a Knock Out on the Rapids Strike Urshifu VMAX out of nowhere, switching the tempo into my favor and winning me the game.

At this point, absolutely everyone should be familiar with Inteleon CRE, Inteleon SSH, and Drizzile. Throughout the Sword & Shield to Evolving Skies format, the entire Inteleon line has become a critical aspect of deck building in a way that resembles the likes of Holon Transceiver in 2006 and 2007 or Tapu Lele-GX (for Brigette) in 2017 and 2018, and I cannot overstate how good this has been for the development of the metagame. Encouraging deck building around searching for cards rather than “dump and draw” strategies as we saw with Dedenne-GX allows for more interesting and complex techs to be played since you can find them at any point in the game rather than hoping you hit them when you need to. In addition, the shift to a single-Prize Pokemon to fill the support role rather than a two-Prize Pokemon provides a situation where deciding when to take out the engine of a deck is a smart call, as doing so can cause you to fall behind in Prizes, sometimes losing the game in the process.

With that all being said, the Inteleon line serves a super standard purpose in this deck — simply search for combo pieces to get the deck up and running as well as finding critical cards like Cheryl on turns that you need to. In addition, Inteleon CRE is extremely important to this deck’s core strategy in two different ways. The first way is far more clear, as it is able to put damage on an undamaged Pokemon that you want to hit with Max Thunder Rumble if needed. The more unclear purpose is that it sets up a lot of surprisingly perfect math, for example, two Max Thunder Rumble alongside a single Quick Shooting sets up a Knock Out on a majority of played Pokemon V. If you go up to three Max Thunder Rumble and maybe throw in a second Quick Shooting, all of a sudden you are able to Knock Out every Pokemon VMAX on the market!

Four Marnie and Two Path to the Peak

In another case of being a standard part of Standard’s VMAX + Inteleon decks, we play a full four Marnie as well as two Path to the Peak. In this deck, we favor the higher Marnie count over a higher Professor's Research count because of the inherently large amount of combo pieces as well as no way to recover some of our critical resources. Because this list plays a few more unconventional techs (for example, the second Galarian Zigzagoon or the second Cheryl), we lose space for recovery. In addition, the natural disruption factor of Marnie is critical to this deck’s success, as sticking the opponent with a bad hand and taking down their search engine can completely flip the tempo of a match if the opponent is not prepared. Additionally, while Crobat V is not as popular as it once was, having Path to the Peak to shut it and any other Abilities down offers a powerful disruption combo that often completely cripples decks on the spot. 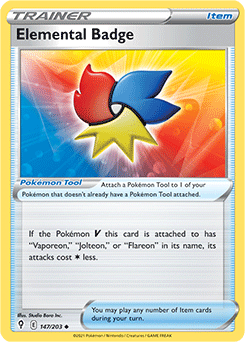 These two Trainer cards may be the most critical cards in the deck.

While Jolteon VMAX’s attack is relatively cheap by most standards, the two Energy cost is still a little slow, or rather, on pace with, the rest of Standard. Thanks to Elemental Badge, however, Jolteon VMAX is able to get a huge jump on the attachment race, eventually getting to a point where they have a surplus of Energy attachments building up on the board. At this point in the game, when you have an Energy surplus, one of the best options is to slam down Cheryl when you take significant amounts of damage.

Doing this often buys enough time to pull together at least one, if not two, extra Max Thunder Rumble, often winning you the game. The best part of this? Thanks to Elemental Badge, we can Cheryl and then immediately attach another Energy and keep attacking!

The Energy Lineup in this deck is the one thing in this deck that I have questioned more than anything. Notably, Capture Energy, while it boasts a strong effect, I am skeptical of whether or not it is best to play it. In way more cases than I would like to admit, I have found myself in a situation where I have Capture Energy, but I whiffed the Lightning Energy, so I cannot attack. While I am uncertain of if I will actually make this change, I may switch the two Capture Energy to additional copies of Lightning Energy and/or Energy Search.