Hello to all PokéBeach readers! Here’s Gabriel Semedo again with another Pokémon TCG article. This time, I’m going to talk about an idea I’m currently testing: a Shadow Rider Calyrex VMAX deck with techs like Suicune V and Celebi V from Sword & Shield.

After so many games with Suicune V / Ludicolo, I wanted to play around with a deck that doesn’t use Inteleon. I think the whole Inteleon line is very strong and I enjoy playing it, but after having to do so much sequencing between Sobble, Drizzile, Inteleon and seeing my opponents do the same in every match, I decided I needed a breath of fresh air. I decided to give Zacian V / Zamazenta V and Shadow Rider Calyrex VMAX a try. From my testing, I decided to go a little further with the latter, and experimented with Aurora Energy and some techs like Suicune V and Celebi V to help protect against its weaknesses and explore its strengths a little more.

The version of Shadow Rider that I’m bringing you today was created to counter some specific threats in the metagame from which the deck has been suffering, including the well-known Galarian Moltres V, Path to the Peak, and even the more recent Umbreon VMAX. (Recently, a Single Strike Urshifu VMAX / Umbreon VMAX deck has gained prominence, with positive matchups against Dragapult VMAX, Shadow Rider Calyrex VMAX, Jolteon VMAX, and more.) The idea of ​​this list is to provide the Shadow Rider Calyrex VMAX player with answers to these problems, with Celebi V to account for Darkness-type opponents’ Weakness to Grass, and Pumpkaboo and Scoop Up Net to remove Path to the Peak from the field. Let’s go into the deck analysis and explain these new ideas in more detail.

With the removal of Alcremie VMAX to make room for some techs, the idea is to transform Shadow Rider Calyrex VMAX itself into the most powerful Pokémon in the deck. With fourteen Energy, Galarian Articuno, and Raihan for acceleration, we can make Shadow Rider Calyrex VMAX capable of Knocking Out a Pokémon VMAX with eleven Energy on the field. It doesn’t come close to Alcremie VMAX, which can Knock Out a Pokémon VMAX for half the effort with its G-Max Whisk attack, but we make the sacrifice of a little raw offensive power to gain space for many matchups’ worth of versatility.

In particular, Alcremie VMAX is not a great response to Umbreon VMAX. Alcremie depends entirely on Shadow Rider Calyrex’s Ability to get the necessary Energy to deal 360 damage, and since Umbreon VMAX can easily target down your Benched Shadow Riders with its Dark Signal Ability, they can take out the engine that powers your response without ever giving you the opportunity to fight back. Other techs provide much better ways of dealing with the threat Umbreon VMAX poses.

Both Basic Shadow Rider Calyrex V are useful, and their attacks each fulfill different important functions. Shadow Rider Calyrex V from Chilling Reign has the Shadow Mist attack, which prevents the opponent from playing Stadiums and Special Energy. It’s a great attack at the beginning of the game to help your setup, mainly because it prevents the opponent from playing Path to the Peak. The Astral Barrage attack is useful against Decidueye, as it can deal damage even with the Ability Deep Forest Camo activated.

Recently, though, another Shadow Calyrex V has made an appearance, and it too has two useful attacks. The first attack allows it to attach a discarded Energy to itself, which is a helpful way to power up a Shadow Rider Calyrex VMAX for the next turn. Meanwhile, I like the Hollow Blinding attack because it deals 130 damage, which is a useful number to Knock Out many single-Prize Pokémon or to complete a KO on a bigger threat. The side effect of locking the Defending Pokémon in the Active Spot, though rarely useful, should not be forgotten, as it can cause problems for the opponent if you know they don’t have access to a switching effect.

Consistency and Power: One Suicune V 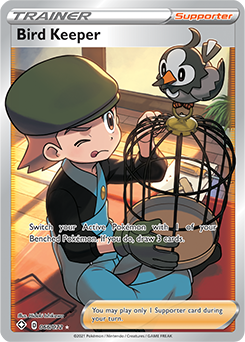 One of the things I was feeling when I was testing the traditional Shadow Rider Calyrex VMAX / Alcremie VMAX build was the lack of a good starter Pokémon. With a good Active Pokémon to start the game, you get an easier setup and more of a capacity to preserve resources. Suicune V is just one of many potentially good starter Pokémon for this deck, but my goal is not to use its Fleet-Footed Ability only once. Rather, the idea with Bird Keeper is to make Suicune V a permanent consistency fixture for the deck, as if its Ability were a kind of Underworld Door with half the draw power, but without the requirement of an Energy attachment.

Apart from the synergy with Bird Keeper, Suicune V also provides an excellent attack in Blizzard Rondo. For just two Energy, Blizzard Rondo can deal up to 220 damage. You can do this as early as your second turn, while also setting up your Shadow Rider Calyrex VMAX and fielding Psychic Energy to power a stronger attack later on.

The Pokémon that has been causing the most headaches for Shadow Rider Calyrex VMAX lately is Umbreon VMAX. It can take an OHKO on a Shadow Rider with extreme ease, and the deck hasn’t yet had found a good way to come back from such a Knock Out. With Celebi V, though, we rekindle some hope for the matchup.

For just two Energy, Celebi V is capable of dealing 300 damage to an Umbreon VMAX. In theory this puts it 10 damage short of a Knock Out, but the opponent will often need to use Houndoom‘s Ability for acceleration, dealing 20 damage to their Umbreon VMAX in the process. If they don’t, though, another way to deal this 10 damage would be with Galarian Zigzagoon. Celebi V also takes easy Knock Outs on Galarian Moltres V, further earning its keep as an ideal inclusion in the list.

Raihan is the best way to respond to an OHKO from an Umbreon VMAX, as it allows you to attach an Energy card from the discard pile in addition to searching a card like Aurora Energy out from your deck. If you bench Celebi V prematurely and attach an Energy to it, your opponent will be forced to take a Knock Out on it, which is not necessarily a bad thing, as it will give them only two Prize cards instead of the usual three from a Shadow Rider Calyrex VMAX.

I don’t expect to win every game against Umbreon VMAX decks with just one Celebi V and two Aurora Energy, but if I can win at least a few games, I think the tech is well worth it.

It’s also important to mention Celebi V’s first attack, because it makes it one of the ideal starter Pokémon for this deck. It allows you to search your deck for any two Pokémon from the deck, which can be either Basic Pokémon or Evolution Pokémon, and put them into your hand. This can help accelerate your setup surprisingly often.