Noble Pokemon are special Pokemon that are said to have received a special blessing that grants them power not held by regular Pokemon. The wardens, like the four characters pictured below, are in charge of keeping watch over these Pokemon and their territory. Recent phenomena have caused these Noble Pokemon to fly into frenzies that make them especially difficult to control–so the Hisuian People seek help from the Galaxy Expedition Team.

It’s possible that this “Noble” Pokemon mechanic will somehow translate to our VSTAR mechanic in the future. The frenzied Kleavor in the trailer features a bright star-like glow.

The text of the official press release follows below.

Pokémon Legends: Arceus
Pokémon Legends: Arceus brings players to the vast Hisui region. This is the Sinnoh region as it existed in the past, long before the familiar towns and cityscapes of Pokémon Diamond and Pokémon Pearl were established. Rich in nature and with Mount Coronet towering at its heart, this is a Sinnoh unlike anything players have experienced before, and they’ll embark on a journey to complete the region’s first Pokédex. 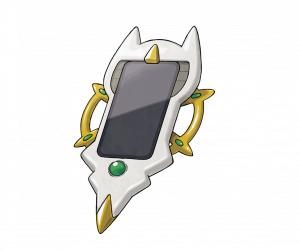 Your Arc Phone will be your guide
Early on in the adventure, players will get a device called the Arc Phone. Its distinctive appearance might lead one to suspect it has some connection to the Mythical Pokémon Arceus. This device seems to contain some sort of strange power, and it will apparently help guide players on their journey.

Special Pokémon with mysterious power
During their expeditions, players may run into Pokémon that are larger than normal and have glowing red eyes. These are known as alpha Pokémon. They’re stronger than their regular counterparts, and they’ll be quite aggressive in chasing and attacking players that stray too close.

There are also special Pokémon in the Hisui region that have received some kind of mysterious blessing. Some of these Pokémon are particularly powerful and have come to be known as nobles, while others are said to willingly assist the people of the region. Each one of these Pokémon seems to hold power not held by regular Pokémon. People known as wardens are tasked with looking after these Pokémon by performing duties such as making sure the nobles’ territories remain unviolated or providing offerings of food and water.​

These Pokémon nobles are revered by the people of the region, but some strange phenomenon is now causing them to suddenly fly into a frenzy. The cause of these incidents is still shrouded in mystery. Once frenzied, these Pokémon are incredibly difficult to rein in, which forces the people of Hisui to turn to the Galaxy Expedition Team for help. As part of the Survey Corps, you will be called upon to quell the frenzies of the nobles. 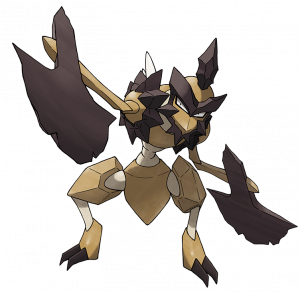 Special minerals found in the Hisui region cause Scyther to evolve into this Pokémon. Parts of its body have hardened into stone. The stone parts often get chipped during fierce battles, and Kleavor that have survived many battles will display larger chipping across their bodies. It is said that the people of Hisui once used pieces of stone that had fallen from Kleavor to craft tools.

Race across sprawling untamed landscapes while riding Pokémon
During their adventures, players will receive a Celestica Flute. This is a mysterious instrument that has been passed down through generations of Hisui’s people. Play the flute anywhere to summon special Pokémon that will let you ride them. Riding these Pokémon will allow players to move faster on land or cross bodies of water or even soar through the skies.

Pokémon Legends: Arceus will be released on Friday, January 28, 2022. It is currently available for preorder.[2]

[2] Players who preorder can receive a Hisuian Growlithe Kimono Set by choosing Get via Internet in the Mystery Gifts feature in their game until May 9, 2022. An internet connection is required to claim this gift. A Nintendo Switch Online membership is not required to claim this gift. It takes approximately two hours of play time before the Mystery Gifts feature is unlocked.