A new Dialga will debut in 25th Anniversary Collection, which will become our Celebrations set in October. 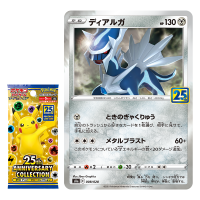 [M] Temporal Backflow: Put a card from your discard pile into your hand.

Garchomp C LV.X from 2009’s Supreme Victors will be reprinted as a promo. (It’s coincidentally sitting on my desk right now!) It will also become part of our Celebrations set.

We covered Garchomp’s reveal just the other day! :x