Hello everyone! I’m happy to be bringing you yet another article!

Last time, we discussed the poster child of Evolving Skies, Rayquaza VMAX, and its strengths in the then-upcoming Team Up to Evolving Skies format. Since that article, Rayquaza VMAX has generally fallen off in tournament results, but I still think it has a place in the metagame. If the format begins to move away from the current focus on spread damage, it couldn’t be better positioned.

However, Evolving Skies brought much more than just Rayquaza VMAX. Since the set’s debut and the rotation to Sword & Shield-on, six of the eight evolutions of Eevee have seen competitive success, with only Espeon VMAX and Flareon VMAX missing out. Notably, Sylveon VMAX, Umbreon VMAX, and Jolteon VMAX have all won online events with at least 300 players in attendance, with Umbreon VMAX’s biggest win coming from an event with over 500 players!

Furthermore, another card that’s had a massive impact on the format is the new Supporter Raihan, which also happens to be my second favorite card in the set. Raihan is the critical form of generic Energy acceleration that decks have been missing over the past few years. This Energy acceleration has provided an excellent buff to already-good decks, like Rapid Strike Urshifu VMAX, and it has also brought old contenders, such as Dragapult VMAX, back into the spotlight.

But if Raihan is my second favorite card in the set, which card takes the number-one spot? Look no further than the topic of this article — my favorite card in all of Evolving Skies is Suicune V!

When I first saw Suicune V, I wasn’t impressed. I thought the Ability was mediocre at best (I mean, it’s just a worse version of Jirachi) and the damage seemed lacking. While it was probably decent enough to make a splash, it wasn’t likely to be anywhere near a top deck.

I couldn’t have been more wrong.

A while back, at the 2021 Japan National Championships, Suicune V had a stellar performance with a number of top finishes. While it didn’t take home the gold (the event was actually won by a Welder variant of Mewtwo and Mew-GX that included Umbreon VMAX!), it proved to be a great card in its own right that a lot of players had overlooked. With solid HP (even better with Cape of Toughness!), good Weakness, and an efficient attack, it’s continued to build on its success since then, with two different variants leading the metagame. One uses Inteleon and Ice Rider Calyrex VMAX, and the other focuses on Ludicolo. For me, it’s too early to say which variant is better, but I love the Ludicolo version — so how about we take a look at that variant first? 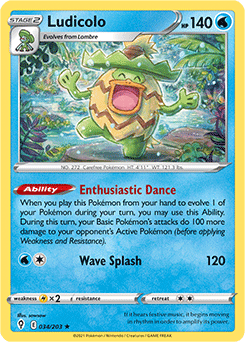 When Suicune V decks were first popping up in Japan, my favorite build was one that used Ludicolo to reach for massive one-hit Knock Outs on Pokemon VMAX. I didn’t expect much to come of it, though, as the Stage 2 Evolution line seemed problematic for the deck’s consistency. Fast forward to the first weeks of the Sword & Shield-on format and, much to my surprise, we saw Suicune V with Ludicolo take down a massive online event (490 players in attendance!) in the hands of my fellow PokeBeach writer Gabriel Pino Semedo. You can read about his take on the deck here!

In Gabriel’s build, he uses the infamous Inteleon line, focusing on Drizzile and Inteleon, to fill the Bench and find the critical pieces needed to ensure that the deck is always functioning at its best. Gabriel’s Ludicolo line was quite slim, a 2-1-2 line with two Rare Candy, but that proved to be plenty as he took down Pokemon VMAX deck after Pokemon VMAX deck to win the tournament. I think that Gabriel’s deck list borders on perfection for the archetype, so this list will be almost identical to his. Without further ado, let’s take a look at it!

As the main attacker in the deck, it should come as absolutely no surprise that we include four copies of Suicune V. Suicune V is far and away the best starter in this deck as well, with its powerful Fleet-Footed Ability offering an extra draw every turn. While this may not seem like a lot, over the course of a game, this can turn into four, five, or even more cards total, which is a massive difference. If you start with Suicune V, you essentially get an eight-card opening hand, which is a huge advantage as well, often allowing you to get out more Sobble or locking up a turn-one Energy attachment. I can’t overstate how insane Fleet-Footed is as an Ability.

But the real reason we play Suicune V is for its attack, Blizzard Rondo. Ranging in damage from 20 to 220 (with your Bench alone it caps at 120), Blizzard Rondo acts as a powerful way to lock up a two-hit Knock Out on almost anything, and in some cases, you might even grab a one-hit Knock Out on various Pokemon V, especially support Pokemon like Crobat V or Kricketune V. All in all, Suicune V stands to be an extremely powerful threat on its own, and this strength goes even further as we continue to examine this deck’s Pokemon line. 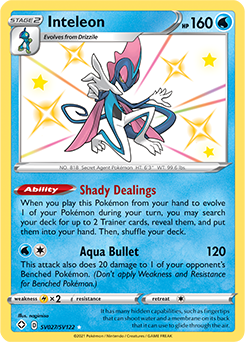 At this point, you should be familiar with the Inteleon line, or rather, the Drizzile line.

I’ve said this in the past, but I still continue to be blown away by how much the Inteleon line exploded in popularity after the release of Inteleon CRE, and to this day I continue to wonder if we were just missing a clearly good hidden gem in Inteleon SSH prior to Chilling Reign‘s release.

In this deck, the Inteleon line is fairly standard: 4-4-2/1, split between the Chilling Reign Inteleon and the Sword & Shield one. The most important part here is obviously going to be Drizzile, as it allows us to find the pieces for critical combos, whether it be a Quick Ball + Capacious Bucket + Melony combo in the early game or a Rare Candy into Ludicolo power play later on. Considering its importance, it only makes sense that we include a full four copies of the card so that we can make sure we find it when we need it and get as many uses out of it as possible. Naturally, the inclusion of four Drizzile means that we have to include four Sobble. Lately, thanks to the emergence of Dragapult VMAX, I have been choosing Sobble SSH 55, which has 70 HP, over Sobble CRE, which only has 60 HP, in order to maximize the odds of my turn-one Sobble surviving until turn two.

As for the actual Inteleon split, I have stuck to two Inteleon CRE and one Inteleon SSH 58, much like Gabriel’s original list. At this point, this split feels correct, but at some points I wish I had a second copy of Inteleon SSH. Inteleon CRE draws most of its value from Quick Shooting, as is typical, but in the case of Suicune V, it has the double purpose of forcing the opponent to put a Pokemon on their Bench, and as a result, we can convert it into a massive one-hit Knock Out on a Pokemon VMAX out of nowhere. As for Inteleon SSH, it’s huge for searching our big combo plays, notably the combo of Rare Candy + Evolution Incense (to find Ludicolo) to grab a big Knock Out. I end up using Inteleon SSH’s Shady Dealings way more frequently than I ever expected to, and as a result, I would love to add another copy, but I have been unable to find the space.

Finally, the man himself, Ludicolo. When Ludicolo was first announced, I immediately fell in love with the card and its incredibly unique Ability. Many people were immediately drawn to Zacian V as a partner, but Zacian V builds never really panned out. As if out of nowhere, though, Ludicolo found a place with Suicune V, guaranteeing itself a spot at the front of the metagame.

As for the card itself, Ludicolo is simply perfect. It happens to add the perfect amount of damage, 100, just enough for Suicune V to take a one-hit Knock Out on some of the most important Pokemon VMAX in the game, such as Shadow Rider Calyrex VMAX and Dragapult VMAX. Additionally, an aspect of Ludicolo that frequently goes underappreciated is that its Ability does not say “You can’t use more than 1 Exciting Dance Ability each turn,” meaning that you can use two or even three at once to make ludicrous damage pushes out of nowhere. Despite its strength, though, we only play a slim 2-1-2 line of Ludicolo, partially due to space and partially due to a thicker line being unneeded. Most games you only use Exciting Dance once or maybe twice, and you frequently just reuse the same one with one of your two Scoop Up Net.

When it comes to getting Ludicolo in play, we have two options: Rare Candy and Lombre. The former is far safer, far more reliable, and far more frequently used. However, if you’re exceptionally lucky, you can occasionally hit Lombre off the top of your deck and use its Top Entry Ability to threaten a Ludicolo out of nowhere. In some games, I wish I had a third Rare Candy, as it also lets you turbo an Inteleon into play, but I have never missed it so much that I wanted to make the space for it.