Hello PokeBeach readers! Isaiah here, happily bringing you another article! Last time, I wrote about Weavile-GX Dark Box decks as well as Galarian Moltres V as a card, and since then, these Dark Box decks have repeatedly proven themselves in various online events. Some of these finishes include a Top 4 Finish at a Standard event with roughly 850 people in attendance, over a dozen Top Cut finishes in events of 50 people or more, and, of course, Leonardo Martins’ 7th place finish in the Players Cup IV Global Finals. On the other side of things, Dark Box variants have been doing exceptionally well in Expanded as well. Notably, a Mewtwo and Mew-GX build has started to gain popularity, making up six of the Top 8 slots in a 92 person Expanded Event. Additionally, on a more personal level, I took a nearly identical list to the one in my last article to a first place finish at a small local event (it was my first event in-person since March 2020!), not dropping a single game in any of the Swiss Rounds or Top Cut!

Stepping back a bit, as I briefly mentioned, the Players Cup IV Global Finals recently finished, with top player Alex Schemanske taking down the tournament with Rapid Strike Urshifu VMAX / Inteleon, which happens to be the topic of today’s article!

In today’s article, we will be taking a look at what Rapid Strike Urshifu VMAX / Inteleon is, what made the deck so good for Alex Schemanske, and then we will look at an updated list for the Sword & Shield to Chilling Reign format. Without further ado, allow us to take a look at what makes Rapid Strike Urshifu VMAX / Inteleon tick!

What Makes This Deck So Good? 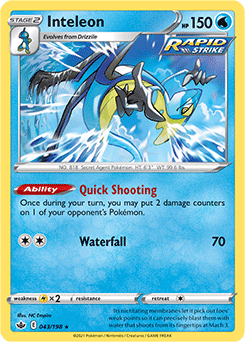 After various strong performances throughout the Team Up to Battle Styles format, Chilling Reign brought the deck its first definitive adversary, being Shadow Rider Calyrex VMAX. While very few people thought that Shadow Rider Calyrex VMAX would kill off Rapid Strike Urshifu VMAX, but many questioned whether or not it would hold its place at the top of the metagame. However, these doubts would be quickly suppressed by the explosion of Inteleon-focused builds that took advantage of Drizzile‘s and Inteleon SSH’s Shady Dealings to setup massive Trainer combo plays while preparing multi-prize turns with Inteleon CRE’s Quick Shooting and G-Max Rapid Flow.

Examining the new Inteleon builds further, a critical aspect of this new style is, once again, the addition of Shady Dealings in particular. In the past, Rapid Strike Urshifu VMAX decks have had to awkwardly pivot into Jirachi in order to try and find the cards that you need for your combo plays, but with Shady Dealings, you now get to go find exactly what you need, drastically reducing the odds of you simply “whiffing” a piece. As a result, Rapid Strike Urshifu VMAX is able to pull off all of the hypothetical plays that people mentioned with the card coming out, such as chaining several G-Max Rapid Flow attacks or using more “gimmicky” Trainers, such as Telescopic Sight or Karate Belt.

Once we move past the step of finding these combo pieces, Inteleon CRE is able to set up previously unreachable Knock Outs, or turn previously tedious Knock Outs into much easier options. One of the most glaring instances of this is any 320 HP Pokemon VMAX can now be Knocked Out in just two hits with the addition of one Quick Shooting, and 330 HP or 340 HP Pokemon VMAX can follow the same pattern but with a second Quick Shooting. Alternatively, Quick Shooting and the newly released Passimian are also able to set up easy Knock Outs on Dedenne-GX or Crobat V as well as essentially using Gale Thrust on any Benched Pokemon with a Rule Box without the need for Boss's Orders.

At this point, it should be very cleat why Rapid Strike Urshifu VMAX / Inteleon is so strong right now, easily holding a spot among the top decks in the format. Now that we know what makes this deck so powerful right now, let’s take a look at Alex Schemanske’s Players Cup IV Global Finals Run and what made his deck so special.

Alex Schemanske’s Players Cup Run was nothing short of extraordinary, with him only dropping a single game (not to be confused with a single match) in the entirety of the Global Finals. Naturally, seeing a game record like this, one must immediately ask, what matchups did Alex hit in order to have a run like this? I will be saving most details here, but I will include game counts.

Alex Schemanske’s deck list for the Players Cup IV Global Finals was a bit different than the typical list for Rapid Strike Urshifu VMAX / Inteleon. Historically, most Rapid Strike Urshifu VMAX deck lists have focused much more on using Gale Thrust on consecutive turns, but Alex deviated from this, instead taking a heavier focus on G-Max Rapid Flow. Personally, I believe this strategy is a much better option, allowing you to set up creative combo Knock Outs instead of having to hope that you hit your switch effects each turn, and I am happy to see a strategy that I always felt was underused make it into the spotlight.

Some readers may be wondering why there is not a copy of the Promo Rapid Strike Urshifu V, but this is simply because the card just is not that good. The card is significantly weaker, even if it can hit the Bench, as the 150 damage from the Battle Styles Rapid Strike Urshifu V’s Hundred Furious Blows is frequently relevant when it comes to taking two-hit Knock Outs on Pokemon VMAX as well as setting up other Knock Outs. Additionally, Strafe is a very, very good attack, keeping a Rapid Strike Urshifu V out of harm’s way if necessary without having to burn a switch out.

In one of my more recent articles, I gave Drizzile, Inteleon, and Inteleon and immense amount of praise. Notably, I omit Rapid Strike Urshifu VMAX from that article, but that does not mean I did not think it was good. In fact, I thought Rapid Strike Urshifu VMAX / Inteleon was very good, but I ended up not talking about it due to my inexperience with the deck, but now I have started to put a good amount of time into it in order to learn it better, and I think I am much more qualified to talk about it now as a result.

In this deck, Inteleon serves a dual purpose. Obviously, the Shady Dealings Ability is absolutely incredible for setting up your board, but that is not its only purpose. In Rapid Strike Urshifu VMAX decks, regardless of their attacking goal, need a lot of pieces to consistently stream attacks. Thankfully, Shady Dealings is excellent at hunting down those pieces, whether they be copies of Switch or copies of Boss's Orders, and making sure that you have a steady stream of powerful attacks. However, unlike many other decks that play an Inteleon Engine, Quick Shooting is beyond pivotal to this deck’s strategy. Quick Shooting is important because it, quite simply, places damage counters on the board. In a lot of cases, this deck finds itself just short of two-hit Knock Outs (such as 150 + 120 into an Arceus and Dialga and Palkia-GX or 150 + 150 into an Ice Rider Calyrex VMAX), but Quick Shooting solves these mathematic problems with ease. Additionally, Quick Shooting fills the excellent role of being able to set up Dedenne-GX or Crobat V for easy Knock Outs with G-Max Rapid Flow while not requiring a Boss’s Orders. With this being said, while Inteleon is great for setting up math, it is not alone in this critical process.