Hello PokeBeach readers! In this article, I’m going to talk about one of my favorite cards; Dragapult VMAX, and how it can be viable in the Standard format.

Similarly to my last article, I will be highlighting one more player who made the top cut of the Players Cup IV. That player is Alex Garcia; better known as “The Guy with Two Hats”, he finished with a 7-2 record piloting Rapid Strike Urshifu VMAX.

For this deck you only plan on attacking with two Dragapult VMAX throughout the game, however, you need to get them out early as many decks can take advantage of the slower nature of the Dragapult VMAX archetype. The reason I have opted for only three Dragapult VMAX is because of the easy accessibility via Drizzile. This deck maximizes consistency using the Inteleon line to boost damage output as well as create a phenomenal early game that many decks can’t handle. 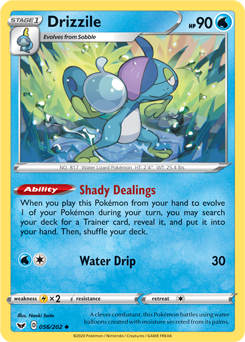 The split in Inteleon is to give this deck some extra options; the damage boost from the Rapid Strike Inteleon makes Dragapult VMAX a clear threat in the format as you can easily Knock Out most Bench Pokemon in two turns, while also applying a ton of pressure to their active Pokemon. The Inteleon that searches for Trainers is often a late-game option or an extra consistency boost when you’re behind. The late-game applications of being able to search for your Reset Stamp + Path to the Peak combo makes this deck extremely consistent and hard for most decks to handle.

The Inteleon line also comes with Drizzle, which is arguably the best card in the line — the consistency boost is far greater than that of a Jirachi engine, and it doesn’t require you to fill your deck with extra switching options. All-round, this line compliments Dragapult VMAX well as you get a smooth consistency engine as well as extra damage output that can hit your opponent’s entire board.

When I first built this deck I only played a single Crobat V. Eventually I decided to add Dedenne-GX, simply because the consistency boost is too beneficial to not include. While you ideally never want to bench these Pokemon, it is important to have the option, especially during the early turns of the game when Energy attachments are pivotal.

In most games, these cards do end up being dead cards as you’ll want to keep Path to the Peak in play as much as possible to make your opponent stumble. In addition, in the majority of matchups, the only win condition for the opponent is to take advantage of these Bench-sitting Pokemon to rush you out of the game, so you have to be mindful if you end up benching one of them.