Hello everyone! Chilling Reign has been out for a few weeks now, and it’s shaken up the format considerably — all sorts of new decks have been seeing success! One archetype in particular, though, is not seeing as much play as it deserves: Despite gaining several new assets in Chilling Reign, Control has been almost completely overlooked. In particular, the most promising option right now appears to be the build that uses Absol and Alolan Muk to trap opponents in the Active Spot. I’ve been playing this deck along with several new Trainers that make the deck considerably stronger than it used to be.

You may not have seen this deck before. The goal is to trap something in the Active Spot and wait for your opponent to deck out. This may not be an enjoyable strategy for everyone, but it’s certainly effective, and it requires meticulous play and planning to pull off.

As with most control decks, this one thrives in an open-list format. If you have access to information about the opponent’s list, you’ll know exactly what kind of answers they have and what you’ll have to deal with. The most important resources for the opponent are switching cards, as those are the biggest threat to this deck’s game plan. 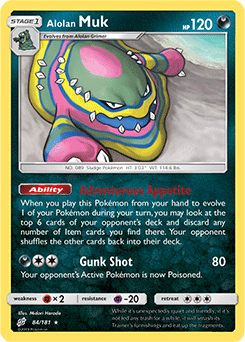 Alolan Muk is the only form of active mill that this deck has access to. Fortunately, it digs deep to get rid of your opponent’s most important cards, such as Switch, Air Balloon, Reset Stamp, and Scoop Up Net. You’ll be using Adventurous Appetite throughout the game. Although it requires a bit of luck to hit important cards with it, you’ll be using it often enough to make your own luck and hit several important resources. If you think your opponent has important Items in their hand already, or if you have some other useful information in the moment, you may want to wait until they shuffle their hand back into their deck to use Adventurous Appetite.

Without Muk, this deck would not have any relevant disruption and would leave the opponents with access to all of their switching cards. Therefore, Muk is probably the most important component the deck has. We play four Scoop Up Net to reuse it as much as possible. The Scoop Up Nets are the most commonly recovered cards from Dhelmise and Munchlax, alongside Boss's Orders.

Alolan Grimer’s Collect is useful for games where your opponent has a Path to the Peak locking your Zacian V‘s Intrepid Sword.

Three Absol, One Galar Mine

These cards form the backbone of the Active Pokémon–lock strategy. Most often, we’ll be targeting cards like Dedenne-GX and Crobat V, since they can’t attack and don’t do much after being played. You always want at least two Absol in play to facilitate this lock. Galar Mine isn’t always necessary and is easily recovered with Dhelmise or Munchlax, which is why I’ve only included one.

These cards are incredibly important for this deck’s early- and mid-game consistency. Jirachi helps you find the specific cards you need when you need them, and Zacian refills your hand every turn.

Oranguru is perhaps the most questionable card in this list, but it earns its keep as a Marnie counter. Marnie is incredibly annoying to deal with, especially after several uses of Intrepid Sword on our end. Oranguru ensures that we’ll always have a Boss’s Orders (or other important resource) ready to go after getting hit by an opposing Marnie. The only drawback is Primate Wisdom’s anti-synergy with Intrepid Sword — we can’t Marnie-proof our topdeck if we’re also using Intrepid Sword on the same turn. Nevertheless, having Oranguru on the Bench is worth it for the mid- to late-game, when you don’t necessarily use Intrepid Sword every turn.

When you aren’t ending your turn with Intrepid Sword, you’ll generally be doing it with Snack Search. The effect is insane, even though it only works half the time, and you’ll use it enough times to get plenty of value out of it even with a few failed attempts. Most often you’ll want to grab Scoop Up Net or Boss’s Orders, but different situations call for different targets.

Dhelmise is almost always better than Munchlax. It can only get Trainers, but it doesn’t rely on a coin flip. The downside is that you won’t always have Dhelmise in the Active Spot along with its required Energy, so Munchlax is a lot easier to use. Later in the game, though, you’ll often want to set it up nonetheless for the certainty of a few Seaweed Grabs.