Hello everyone! With nearly a month and a half before next season’s rotation hits, tfhe current Standard format still has its share of life left in it. Today I’m going to be talking about the deck that I’ve been playing lately, and it’s also one that’s been doing quite well in recent online events. Previously known as a meme or budget deck, we’ll be taking a look at Caturday.

There is one big reason why Caturday is so good now when it wasn’t before, and that’s the Inteleon line. Chilling Reign introduced Inteleon, a way to deal extra damage to your opponent’s Pokemon on the Bench. This is important because it buffs Espurr‘s usability and strength significantly. Caturday doesn’t have plenty of attackers to choose from, and Espurr is the most powerful among the limited options.

Furthermore, with Inteleon, the deck has access to the Drizzile engine for consistency. Not only does this help the deck set up multiple Inteleon consistently, but it also finds key Trainer cards such as Roxie, Echoing Horn, and Ordinary Rod at opportune times. Speaking of Echoing Horn, it is yet another blessing that Chilling Reign has bestowed upon the Caturday deck. Let’s take a look at the list and matchups. 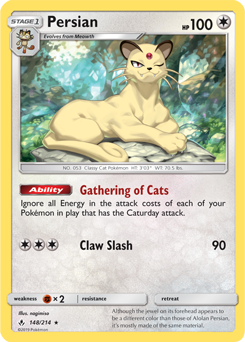 The key to this deck is Persian‘s Ability, which allows every Pokemon with the Caturday attack to use all of their attacks without requiring Energy. This is the backbone of the deck. You will need a Persian in play at all times, as well as a backup Meowth in case Persian gets Knocked Out. Your first objective is to get one Meowth into play on turn 1. You also want at least one Sobble in play as soon as possible, but Meowth is even more important. Since Inteleon is a Stage-2 Pokemon, it takes time to set up, so you want them out as fast as possible. As mentioned earlier, Drizzile ensures that games run smoothly thanks to its Shady Dealings Ability.

This deck employs many methods of indirect damage. This is far from a traditional deck, and requires a bit of creativity and adaptability when playing it. Most of your KO’s will come from Espurr’s Ear Kinesis attack. To set up for Ear Kinesis KO’s, this deck uses primarily Weezing, Inteleon, and Rowlet. Your preferred early game attackers are Litten and Rowlet, since Espurr is useless for the first few turns. You can also attack with Mew, Hoopa, or even Meowth if needed.

An opposing Mew can block Espurr’s attack, but they are easily taken out with Inteleon, Weezing, and your own Mew. Opponents may think that Mew is a good counter to this deck, but in reality it’s an easy Prize card for you.

It is much easier to search out Koffing than Weezing, but starting with it is disastrous. Roxie with Weezing spreads an absurd amount of damage, especially because most decks in the format operate with large Bench sizes. This spread damage is instrumental for setting up KO’s with Espurr’s Ear Kinesis. Even without Weezing, Roxie is a fantastic draw Supporter for this deck because there’s 30 Pokemon, which is plenty of fuel for Roxie. Roxie is the preferred draw Supporter most of the time due to the spread damage, but you may want to conserve them if the opponent doesn’t have many Pokemon in play.

One Rowlet and Four Bird Keeper

Rowlet is a useful attacker for this deck, though it only works when you use Bird Keeper. Bird Keeper is a decent draw Supporter that also provides this deck with switching options. Bird Keeper performs several functions at once, and alleviates the need for cards like Switch or Air Balloon. Rowlet’s attack can be used as early as turn 1, and it beautifully sets up KO’s for Espurr. You’ll usually use Rowlet’s attack against Pokemon with high HP such as Pokemon VMAX, as it’s the most reliable way to set those Pokemon up for Espurr KO’s.