Hello everyone! I hope you are enjoying the early days of the Battle Styles format — I know I am! In my last article, I took a look at two new cards — Bronzong and Cheryl — with the goal of designing decks to take advantage of the powerful synergy that the two have together. The Bronzong / Cheryl combination is certainly a tough one to beat, but it isn’t the only competitive way to play Bronzong. The other way — Rainbow Bronzong — is what we will be exploring in this article. 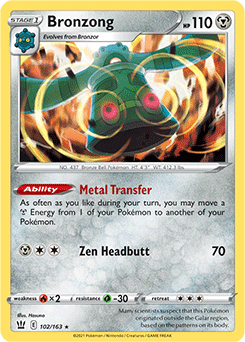 Despite having the same Bronzong core, this deck is a far cry from the tanky VMAX-based strategy that the Cheryl deck used. Instead, this Rainbow Bronzong deck is versatile and aggressive. I’ll use a reference from the last article once again: just as Cheryl Bronzong represented the healing side of the old Nationals-winning Klinklang archetype, Rainbow Bronzong represents how the deck was able to play using type advantages. As you might expect from the name, Rainbow Bronzong is a deck that uses Bronzong to facilitate a wide range of attacking Pokemon. The idea behind this deck is to accelerate Metal Energy with a combination of Metal Saucer and Zacian V’s Intrepid Sword, then to use Bronzong’s Metal Transfer to move that Energy to whichever attacker is ideal for the given scenario or matchup. Most of the time, that will be an attacker that can hit your opponent for Weakness — snorlideally, for a OHKO. Because Bronzong can move Aurora Energy around, you can easily switch from attacker to attacker, even when those attackers have a wide variety of Energy requirements.

This variety means that Rainbow Bronzong can, in theory, have a strong plan against any matchup. The end result here is a rather fast deck, which utilizes the advantages of a number of different archetypes to win. One of the great things about this deck is how adaptable it is, and how easy it is to adjust it in anticipation of a particular meta. Of course, this also comes with a dilemma: given that you can’t include everything, which cards do you include, and which do you cut out?

Adapting to the Standard Meta

To answer that question, we first need to take a look at what decks are seeing play right now. That way, we’ll have a good idea of which decks we need to be most well prepared for, and can adjust our decklist accordingly. Battle Styles has only recently become available to play on PTCGO, but nonetheless we have plenty of tournament results with the new cards. While the format is a bit chaotic right now, especially when it comes to top placements, we can still get a good idea of what to expect by looking at the meta share of each deck.

For the most part, all of the decks from the Vivid Voltage meta have stuck around. Zacian V / Arceus and Dialga and Palkia-GX remains the most played of any deck, but Eternatus VMAX, Centiskorch VMAX, Pikachu and Zekrom-GX, Blacephalon, and Mewtwo and Mew-GX decks all continue to see play too. In addition to those, there has also been a resurgence in Dragapult VMAX decks, which has been in the top six-most played decks of all but one of the major online events thus far. Other decks which have seen a recent uptick in play include Decidueye, Frosmoth decks, and single-Prize attacking archetypes such as Spiritomb and Mad Party. (For those latter three, the return of Level Ball to the format seems to have been quite a benefit!)

Finally, we have the new decks, some of which are already beginning to see heavy play. Rapid Strike Urshifu VMAX and Victini VMAX decks are seeing the most — both of these have been in the top five most played decks in every major online event thus far. Single Strike Urshifu VMAX and Bronzong / Cheryl have also emerged as consistent meta decks, though to a lesser extent. Bronzong / Cheryl seems to have absorbed the previous meta share of Lucario and Melmetal-GX, as most of those decks have adjusted to include Corviknight VMAX to take advantage of the Bronzong-Cheryl combo.

If nothing else, this format is incredibly diverse; I’ve named 15 decks up above, none of which are the Bronzong deck I’m writing about! That’s great news for format health, but it is less helpful for deciding which decks to tech for. To further narrow things down, I’ve divided those above decks into tiers, based on their current meta share (note that this is not a traditional “deck A is better than deck B” tier list). That tier list is as follows:

It’s worth noting that the gaps here aren’t tremendously large, but this does give us a bit of an idea about where to look when it comes to narrowing down our decklist. There’s a clear gap between ADP and the rest of the field, but even ADP tends to top out at about 12-15% of the meta, compared with 8-10% for the next tier. Given how many decks are in the format, no individual deck is going to make up a huge share, which also means that there is a fair amount of variance within the tiers.

Given that Rainbow Bronzong is essentially an anti-meta deck, you naturally want to base your list around beating the most heavily played and most well-performing meta decks. As I said above, the top placements have been a bit chaotic, to the point that you could probably mash those tiers together, jumble them around, and have something close to the results for a given tournament. Because of that, I’ve focused my list more heavily on those more-played decks, as opposed to worrying too much about what finished first most recently or anything like that. There are quite a few different options for attackers in this deck, many of which I’ll be going over below, but for now, let me share what I’ve put together as my go-to Rainbow Bronzong list: