Hello PokeBeach readers! Once again, I’m back with a Standard-format article!

At long last, the Vivid Voltage formats are coming to a close, and not a moment too soon. With Battle Styles on the horizon, I am ecstatic to see a new breath of fresh air in the format — for me, the current one has been getting fairly dull, and I’m sure quite a few of you are feeling the same way. Aside from scattered promos and the extremely limited supply of good cards in the Shining Fates expansion, the competitive meta hasn’t changed much at all since Vivid Voltage released in November 2020 — and even then, the set didn’t have a major impact on the format, so really, I’d say the format has been pretty static since last August’s release of Darkness Ablaze and rotation to Team Up-on. As for the Expanded format, six changes have been made to the ban list since the release of Vivid Voltage and a lot of the cards released in the past year have had somewhat significant impacts on the format as a whole, but even then, a lot of the decks have stayed fairly stagnant, with most changes being minor optimizations rather than new archetypes being born.

But all that Expanded talk is for another day! Right now, let’s talk about Standard.

I can confidently say that the current state of the game is one of the weirdest it’s been in the nine years I’ve been playing competitively — rivaled only by the Night March days of 2016 or the “Mewtwo-EX Wars” of 2012. As of writing this, I think it’s safe to say that the best deck in the format is Eternatus VMAX, whether it be a linear build with multiple Yveltal or a Poison-based build around Toxicroak. I prefer the former, but I think both builds have to be taken together as “the strongest” because of their ability to blow over the opponent with a turn-two Dread End for 270 out of seemingly nowhere. As a result of this deck’s success, many decks, including Eternatus VMAX itself, have begun to play Crushing Hammer — a card which I’ve grown to despise over the past few months. 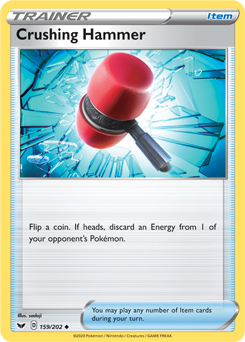 Crushing Hammer is one of the few Trainers that are essentially able to “win the game” when used at the right time, often crippling a board. At face value, this could easily be worse. I mean, cards like Boss's Orders are also able to win the game at a single use, right?

The big difference between Boss’s Orders and Crushing Hammer is that the latter requires heads on a coin flip to work. This is where Crushing Hammer crosses the barrier from being an interesting card to being, for lack of a better term, toxic. In a universe where Crushing Hammer doesn’t have this coin flip, the card is much more interesting. You can play with the guarantee that they will hit it if they find it, which is relatively easy. However, with the card requiring a coin flip, not only do you have to plan for them drawing the card, you also have to consider the outcome of your opponent flipping tails. As such, it’s ideal in most situations to just play with the hope that they are unable to land a Crushing Hammer — but then if they do, you may end up more or less losing the game instantly.

The Crushing Hammer problem is further exacerbated by the card’s versatility. Being an unconditional Item card (barring its coin flip requirement), Crushing Hammer can be teched into any archetype. Not only that, because of the nature of the attackers in the current format, Crushing Hammer has the impact it has against Eternatus VMAX against a majority of the format. For instance, take Pikachu and Zekrom-GX. Pikachu and Zekrom-GX often uses Boltund V as a form of early acceleration to power up Full Blitz, but even still, sometimes Crushing Hammer can completely ruin a play that you need to win a game, especially if you’re playing an Energy Switch build with the intent to build up combos with Energy already in play.

That being said, not all decks take major hits from Crushing Hammer. Take the various Welder decks of the format, especially Centiskorch VMAX and Blacephalon Both of these decks essentially turn Crushing Hammer into a dead card due to how easily they accelerate Energy. Furthermore, with the popularity of Zacian V, these Fire decks are can score quick Prizes against nearly half the format with relative ease. As such, Fire decks like these can rival even Eternatus VMAX in power, between their tendency for explosive starts and the ease with which they prey on the format’s main threats.

Lastly, I’d be remiss if I didn’t mention the infamous Arceus and Dialga and Palkia-GX / Zacian V deck. With a strategy all too familiar to most players, this deck aims to explode with a turn-two Altered Creation GX, typically ending the game in an average of four turns (usually with the sequence of Altered Creation GX, Boss’s Orders, and then Boss’s Orders again). Due to its fantastic efficiency, Arceus and Dialga and Palkia-GX has proven to be the ultimate gatekeeper in Standard. Since Altered Creation GX makes a Dedenne-GX Knock Out worth three Prize cards, decks are punished for using their Dedenne-GX too aggressively. On the flip side, decks that go too slow will succumb to the speed of the Arceus and Dialga and Palkia-GX and Zacian V combo. For most prospective rogue decks, it’s a lose-lose situation. Typically, in a field of as many multi-Prize Pokemon as the current Standard format has, we would see an emergence of single-Prize attackers like the Mad Party deck. Since Altered Creation GX makes them give up two Prizes, though, even decks like Mad Party that are built to be efficient are unable to trade well.

Looking forward however, there may be light at the end of the tunnel. Lately, the number of Arceus and Dialga and Palkia-GX decks in major online Standard events has been on the decline, going from a fairly consistent 35 in any given event four months ago to seldom breaking the 20 mark now, and often below even 15. This change can likely be attributed to the increase in popularity Crushing Hammer, since one heads flip on an early-game Crushing Hammer can stop the turn-two Altered Creation GX in its tracks. I would welcome this change with open arms, since Arceus and Dialga and Palkia-GX’s decline would theoretically mean more room for strong single-Prize decks, but unfortunately, aside from Blacephalon and the extremely inconsistent Mad Party, no single-Prize deck has yet managed to take on the format. However, I expect this to change with Battle Styles with the emergence of a new deck that I’m quite fond of: Cherrim / Tapu Bulu.

As some readers may remember, as I mentioned it in my first article, I was extremely fond of the Tapu Bulu-GX / Vikavolt archetype, even having been one of the driving minds behind the first successful list alongside fellow writer Charlie Lockyer and a few others. As such, seeing a pseudo reincarnation of the deck in Battle Styles made me extremely excited, and I immediately got to work on two lists, both of which I will be covering in today’s article.

The strategy of this version of Cherrim / Tapu Bulu lives up to its title. It’s extremely straightforward and seldom deviates from the strategy of loading up Tapu Bulu, swinging with Nature’s Judgement, and repeating. As a result of the linearity of this strategy, we can fit more consistency cards, so we can provide constant pressure on the opponent and take games handily on the Prize trade alone. Going forward, I think this simple deck has a lot of potential to be one of the next big hitters in the Standard format.

A 4-4 Cherrim line should come as no surprise — I’m a big fan of consistency. However, my choice here also comes from extensive experience playing archetypes like this one. Over the years, I’ve spent a lot time playing decks like Blastoise or Emboar, both of which rely on Abilities nearly identical to Cherrim’s. In my experience with those decks, a majority of games were decided not by the consistency of your attacks, but by the consistency of establishing the support Pokemon early, often, and consistently. You can also see this in my generally high Pokemon search count, totaling nine.

As the main attacker of the deck, it should come as no surprise that I am playing four of them. Tapu Bulu’s attack dealing 160 damage may be a little underwhelming, but it’s at least capable of scoring a one-hit Knock Out on Dedenne-GX — always a great starting point. In addition, the consistent 160 guarantees that you will always have at most a two-hit Knock Out on every Pokemon in Standard. And finally, in the cases where you’re unable to score that two-hit Knock Out, you have Shaymin Prism Star.

While Shaymin Prism Star is generally only usable once per game, it has the huge benefit of being able to significantly exceed Tapu Bulu’s damage cap. In some cases, Shaymin may even be able to score a one-hit Knock Out on some higher HP Pokemon like Zacian V or Pikachu and Zekrom-GX. Furthermore, its extremely convenient Retreat Cost of zero means it can also act as an easy pivot all game. However, Cherrim is unable to accelerate Energy onto Shaymin Prism Star, so make sure to begin preparing it at least one turn in advance!

If you had told me five years ago that I would be including Rocky Helmet in a deck, I probably would have made fun of you for hours. However, in this deck, unbelievably, Rocky Helmet manages to find itself a niche. It deals the last 20 damage needed to get the two-hit Knock Out on major threats like Eternatus VMAX or Rapid Strike Urshifu VMAX. In addition, against Lucario and Melmetal-GX, Tapu Bulu can only do 100 damage to a Zacian V with a Metal Goggles. With the addition of Rocky Helmet, however, we are able to add on that extra 20 damage to hit the two-hit Knock Out right on the nose. In this deck, Rocky Helmet is not just a good fit for solving some mathematical issues — it’s the perfect fit.