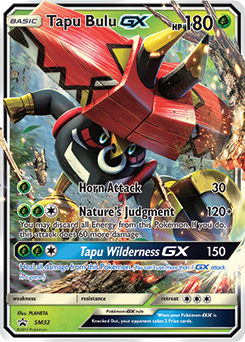 Hello everyone! My name is Isaiah Cheville, and this is my first article on PokeBeach! As such, I should probably introduce myself. I am a student at the University of Iowa studying Statistics, and I have been playing the Pokemon TCG at a competitive level for eight years, starting near the release of Black & White: Next Destinies. My first major accomplishment was soon after this, winning the Iowa State Championship in the Junior division. I got my first invitation to the World Championship in 2014, and I have gotten it almost every year since then, missing my invitation in 2017. Beyond that, I have made Top 8 at three Regional Championships as well as Top 16 at US Nationals, all in Seniors. Into my years as a Master, I have made Day 2 at a couple Regional level events, but I also don’t consider my tournament results to be my greatest strength. Throughout my competitive career, I have probably become best known for my contributions to some crazy decks, including but not limited to: Archie's Ace in the Hole / Blastoise (US Nationals 2015), Tapu Bulu-GX / Vikavolt (Madison Regionals 2017), Buzzwole / Weavile (Quarter 1 2018-19 Season), Lost March (Roanoke 2018), and many more!

Considering my history of working with oddball decks, it should come as no surprise that my first article is about yet another odd deck. Around mid-August, I caught wind of a Mewtwo and Mew-GX variant that played Starmie-GX and I immediately got to work on trying to develop it to be the best deck I could for the upcoming rotation to Team Up-on. In the process of doing this, I remembered one of my favorite cards from the Theme Deck format, Kyogre. This Kyogre style of Mewtwo then brought me to keep digging for other forms of Energy acceleration such as Frosmoth and Latias and Latios-GX. Surprisingly, about a week after developing these different versions of Mewtwo & Mew-GX, I saw someone else share a list of the Frosmoth variant, which I hadn’t put a ton of time into developing myself, but I still felt it had a lot of potential.

As I previously mentioned, I actually got the idea of how to go about building the Frosmoth variant from someone else on social media, but I have made some slight modifications in my testing. The strategy of the deck is quite simple, built heavily around the idea of using Frosmoth to load a ton of Water Energy on any of the several Water types (the easiest of which to use is just Frosmoth itself) and then use Mewtwo and Mew-GX’s Perfection Ability to copy Blastoise-GX‘s Rocket Splash to deliver a stream of one-hit Knock Outs against any type of deck. However, due to the inherent flexibility of Mewtwo and Mew-GX as well as Frosmoth, the deck is also presented with various other options, including survivability with Blastoise and Piplup-GX‘s Splash Maker delivering an easy one-hit Knock Out on Eternatus VMAX with Keldeo-GX‘s Resolute Blade GX, and additional early game Energy acceleration with Starmie-GX. The deck lives on the happy medium of being linear in strategy while also having a diverse number of options, which is excellent to have in a tournament setting.

As the main attacking Pokemon in the deck, it should be obvious why we play four copies, you always need to have it. Since its release in in Unified Minds, Mewtwo and Mew-GX has been a dominant force in the metagame, winning almost every Regional Championship in the first quarter of the 2019-20 season and continuing to have a presence in the following months. This constant success is easily attributable to one thing: versatility. This variant is easily the most linear variant of Mewtwo & Mew-GX that has ever been created, with only one primary attack, but the deck certainly doesn’t lack options either, with five usable normal attacks and four usable GX attacks.

Acting as this deck’s primary source of Energy acceleration and, by extension, attack fuel, Frosmoth is absolutely critical to this deck’s success. Three Snom and three Frosmoth has felt like a fairly healthy line in my experience, but I have occasionally wished I had four Snom, typically against Inteleon VMAX when I prize one Snom. I would say the thickest line I would ever consider in this deck would be four Snom with three Frosmoth, but I would never go lower than three Snom and three Frosmoth.

As the main source of damage output in this deck, it is pivotal that you get it in the discard pile as quickly as possible. The combination of two Blastoise-GX, seven Item cards to search for it, and a plethora of ways to discard it makes this process easy. With this ease of discarding, you could feasibly get away with one copy and open up a slot for another consistency card, but it is the single card in the deck that you absolutely cannot afford to have stuck in your Prizes, so you are almost obligated to play multiple. Unfortunately, two copies is all the higher you can go without compromising your deck’s consistency, so that is where we sit. In the event you do prize both, the deck has enough other options that it can take some prizes in hopes of hitting the one in three chance of hitting either copy.

Blastoise and Piplup-GX is easily the least used card in this deck and could be replaced by Wailord V, a card I will examine more in depth later in the article, but the value of being able to act as back up Energy acceleration while dealing damage in addition to the capability to heal damaged Pokemon cannot be understated. In addition to the value of Splash Maker, Bubble Launcher GX can paralyze the a Pokemon like Arceus and Dialga and Palkia-GX that is difficult to one-hit Knock Out without shuffling in a ton of Energy with Rocket Splash, establishing a safer two-hit Knock Out.

Since the release of Sword & Shield, Zacian V has replaced Keldeo-GX as the optimal partner for Arceus and Dialga and Palkia-GX, leaving Keldeo-GX to vanish into obscurity. Fortunately, Keldeo-GX was given another chance with the release of Darkness Ablaze and Eternatus VMAX, thanks to its ability to easily OHKO the 340 HP behemoth. Thanks to this interaction between Keldeo-GX and Eternatus VMAX, the match-up can become extraordinarily easy, essentially becoming a two attack game with some luck.

As one of the non-shiny Pokemon-GX in Hidden Fates, most of the player base, myself included, immediately dismissed the card because of its lackluster damage output and it simply being overshadowed by the rest of the set. However, because of the way the metagame has shifted since rotation in August, Starmie-GX finally got a time to shine. This deck very rarely uses any attack other than Star Stream, but it uses Star Stream almost every game, as it provides much needed Energy acceleration onto Mewtwo & Mew-GX, so you don’t have to deal with missing a turn down the road.

A staple combination of consistency cards in the format, I felt it was worth mentioning why I had these counts. This split of Dedenne-GX and Crobat V allows for easy digging once you need to start streaming attacks, especially when paired with the Supporters. Originally, I played four Professor’s Research and four Marnie, but I later cut down to just two Marnie and beefed up the Dedenne-GX and Crobat V count because I rarely actually wanted to play the card for more than just shuffling in a couple cards.

One Misty and Lorelei 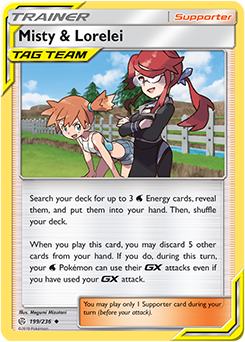 One of the more unique inclusions, Misty and Lorelei finally finds a place as an offensive tool in this deck as opposed to its history of being just another use of Cold Crush GX from Articuno-GX. Admittedly, I rarely use this card for more than just a way to find a few extra Energy, but it does boast the potential of using two of Keldeo-GX’s critical Resolute Blade GX in the Eternatus VMAX match-up if you have Mewtwo and Mew-GX use it first and Keldeo-GX use it with Misty & Lorelei.

By far one of my favorite parts about how the current Standard format has developed is that Capacious Bucket, which is my favorite card from Rebel Clash, is finally getting the spotlight it deserves, being more prominently featured in Lapras VMAX, and all of the Water Mewtwo and Mew-GX variants. It should go without saying that the single most important thing in this deck is to be able to easily access large numbers of Water Energy seemingly on demand. The split that I am currently playing has felt the most healthy, but there have been times that I wished I played one or two more Water Energy. Additionally, a case could be made for Training Court, but I have opted against it because it both fails to fetch Energy that have been shuffled in with Rocket Splash and it doesn’t discard cards to fuel Mewtwo and Mew-GX’s attack options.

This particular variant of Water Mewtwo and Mew-GX is easily my favorite, being my first and the one I have spent the most time developing. The strategy of this one is fundamentally similar to the the Frosmoth version, focusing on the power of Blastoise-GX’s Rocket Splash, but it instead uses Kyogre for Energy acceleration, similar to the recent emergence of decks with Rotom or Victini. As a result of this change in dynamic, this version requires a bit more turn planning and thinking about if your target for High Water is the best target for your game plan. However, this change also supports a more dynamic playstyle instead of just having one main attack. It isn’t uncommon for me to use every attack at my disposal to pull together a victory.