Hey readers, it’s Charlie and I’m super excited to be back with another article! I’ve been working on two new decks for the Expanded format that I wanted to share with you guys. I’m working hard to find fun and innovative strategies that can spark joy in playing Pokemon, which is especially important in a time with no major tournaments and an atrocious Standard format.

In this article, I’ll share with you updates to two archetypes — one popular and one much more rogue — that I enjoy playing in Expanded now. Coincidentally, both of these decks are based on many different Dragon-type Pokemon and the power of Double Dragon Energy, one of the most unique and interesting Energy cards we’ve ever seen. Since Dragon-types usually have two different basic Energy requirements, Double Dragon Energy lets us cover both at once while acting like two Energy attachments! This lets us accelerate high-cost attackers and use attacks that cost two Energy or less for only one attachment.

The first deck I’m going to share is an update to the Garchomp and Giratina-GX archetype that won Dallas Regionals over a year ago now (times are crazy). With four new sets having been released, I feel this deck has only gotten better. It gained new options like Scoop Up Net and Galarian Zigzagoon that allow you to further abuse damage placement and put out ridiculous numbers very early in the game. So without further ado, here’s the list!

I originally started with a combination of Hunter Butler’s winning list and various lists that placed in Collinsville (where Sword & Shield was legal). This list felt the most consistent out of anything I used. This list is good for playing on the ladder, but you may want to make meta-specific adjustments if you’re planning to play in a tournament with it. I’ll go into a few of the card counts: 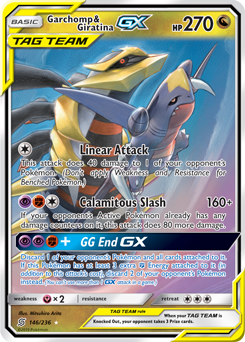 One Koffing and One Weezing

In combination with Roxie, Weezing can add lots of extra damage to the board and give you the damage counters necessary to boost Garchomp and Giratina-GX’s Calamitous Slash. It’s also searchable with Mysterious Treasure. I included a copy of Koffing that has the same Ability instead of a second Weezing; this isn’t necessary but it allows you to search out a Pokemon with this Ability using Quick Ball as well. Overall, this combination lets you get damage onto the board early and often that you can later manipulate and use to Garchomp and Giratina-GX’s advantage.

This card is one of the best Pokemon in Expanded for good reason; Exeggcute‘s Propagation Ability lets it be used as discard fodder perpetually for various effects. Not only do the classics of Quick Ball, Mysterious Treasure, and Computer Search appear here, but Roxie is also able to discard Exeggcute and draw 3 cards! Having Exeggcute guarantees that you’ll be able to draw 6 cards with Roxie and afford the discard cost for Quick Ball and Mysterious Treasure. This card has been a staple for years, and it’s better than ever in this deck.

Since we’re playing Double Dragon Energy why not add some Item lock into the fold? Noivern-GX not only offers Item lock for a single Double Dragon Energy, it gives us the chance to lock Special Energy cards (with an additional Basic Energy attachment) and spread damage with its Boomburst GX attack! Noivern-GX is a multipurpose tool that adds another dimension of play to the deck and gives you outs to otherwise hard matchups that rely on Items, like Shock Lock. I like this inclusion and it’s definitely worth the two spots.

One Dedenne GX and One Crobat V

With Shaymin-EX banned, we turn to both Dedenne-GX and Crobat V to help improve consistency. Both of these cards give us options to draw after playing a Supporter and are useful in all stages of the game. I wouldn’t mess with these counts unless it’s to add more of them, both cards are wildly powerful in a fast deck like this and deserve the spots.

I chose to include Jirachi-EX over Tapu Lele-GX because it can be reused with Scoop Up Net, which makes it so much more powerful than being able to search it with Mysterious Treasure or having extra HP. You now gain another out to Supporters in the form of an Item whenever you have Jirachi-EX on the board.