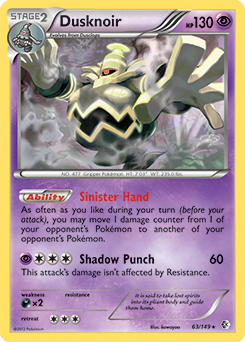 Hey guys, it’s Charlie and I’m happy to be back with another article.  In my last article, I mentioned that I had been working on many variants that centered around Dusknoir; a Pokemon with multiple incredible prints that work together to create extremely powerful strategies in the Expanded format.  I love complex cards with complex interactions that open up many lines of play, so the various prints of Dusknoir caught my eye immediately.

Interestingly, every single Dusknoir ever printed has either a Poke-Power, Poke-Body, or an Ability (except the two Basics: Dusknoir FB, but those don’t count).  Pokemon with Abilities/Powers have always been significantly more interesting than vanilla attackers in my mind; they can do way more because they work during your turn and allow good players to make unique moves in order to maximize their chances of winning.  Before diving into the lists, let’s do a quick overview of the multiple “playable” Dusknoir in the Expanded format:

Our first Dusknoir is likely the most powerful Dusknoir ever printed based on strict power level (Dusknoir DP comes close) due to its ability to move damage literally anywhere on your opponent’s board.  This is one of the most powerful effects ever printed; you not only can focus damage from spread attackers like Tapu Koko and Trevenant BREAK onto specific Pokemon, but you can also move damage from any attack around in order to take a KO on a lower HP Pokemon or purposely keep one of your opponent’s Pokemon from being KO’d (Accelgor decks come to mind).  Throughout its rich history, this Dusknoir has seen significant play in many different decks and was printed in Trent Orndorff’s 2014 World Championship Deck.  In Expanded toady, this Dusknoir has the potential to do even more for specific decks, as spread attackers are more powerful than ever and Dedenne-GX is on pretty much everybody’s Bench.

While not nearly as powerful as the last Dusknoir, the Dusknoir from Flashfire has many use cases in which it can be viable.  Its Ability, Shadow Void, allows you to move as many damage counters as you want from your Pokemon to Dusknoir.  You can use this to “heal” your Pokemon and then remove the damage altogether with something like Max Potion, keeping some of your Pokemon out of OHKO/2HKO range.  In combination with Dusknoir BCR, you can have soft control over your own damage and complete control over your opponent’s — a powerful prospect indeed.  I don’t know if I’ll put this Dusknoir in any decks in the near future (it has been power crept out of relevancy because 120 damage is no longer much), but it’s an option to keep in mind when building around other Dusknoir.

This Dusknoir has an Ability that acts similar to Mawile-GX, except you only get to take one Pokemon but also get to place 3 damage counters on it.  Not only is this powerful in an Expanded format with Exeggcute running rampant, but it’s also powerful in combination with Dusknoir BCR as you can get more damage onto the board and also bring down more targets to put your damage onto.  With both Dusknoir BCR and BUS on the field, you have incredible control over your opponent’s Pokemon and can almost draw Prize cards at will.  Plus, you get a free peek at your opponent’s hand once a turn; an often overlooked but very strong power in a format with N. I play this in one of my lists as an easy way to pick off Prize cards and get down more targets to take damage, but its use cases are much broader and I encourage you to explore using this card in your lists.

This is likely the weakest Dusknoir on the list. Dusknoir from Cosmic Eclipse is a solid attacker with a built-in Spell Tag, but it doesn’t have any game-changing impact like the other Dusknoir.  I won’t be playing this in any lists, but it’s a great attacker in formats that are closer to Prerelease-style.

Of all the Dusknoir, this one might be my favorite.  The new Dusknoir from Vivid Voltage brings back an effect the game hasn’t seen in years – invalidating the effects of Special Energy.  In both Standard and Expanded, Special Energy are extremely powerful, but their dominance in Expanded cannot be understated.  Shutting off Special energy literally stops some of Expanded’s best decks from operating entirely, winning your deck matchups even if you wouldn’t have otherwise.  I love having this effect back in the game, and the only downside is that it stops your own Special Energy from working as well.  If you design your deck to handle this, you should be fine, but it does even the playing field to the point where the effect is balanced.  If anyone from the card design team is reading this, PLEASE print more cards like this!

Now that I’ve gone over the various Dusknoir legal in Expanded, here are a few of the decks I’ve recently tested that take advantage of them.  Please explore all of their possibilities in your own testing as well, these cards are so much fun and have even more untapped potential that I didn’t explore here.

This is a deck my friend and fellow PokeBeach writer Isaiah Cheville came up with in 2018, but it hasn’t gotten much outside of a few Regional placements and League Cup wins since.  This is mostly because Expanded was evolving faster than the deck could, with broken new strategies coming every set release.  Now that we’ve seen a slew of bans, including the ever-popular Shaymin-EX, Expanded is once again a prime candidate to be dominated by this super fun strategy.  I’ll go into some of the card inclusions below:

I chose to play 4 Duskull in order to maximize my chance of getting it down on my first turn so I can immediately use Spiritborne Evolution and get Dusclops out.  Since you only need one copy of Dusknoir BCR on the board at once, I felt that two was enough due to the inclusion of Rescue Stretcher as well.  I also included one copy of Dusknoir BUS in order to get extra damage on the board and more Pokemon to target with Tapu Koko’s attack.  Overall, I feel that this split gets the job done, however I could be convinced to cut down on Duskull or add an extra Dusknoir BCR.  Note: Dusknoir VIV does not fit in this deck because it shuts off all your own Energy! 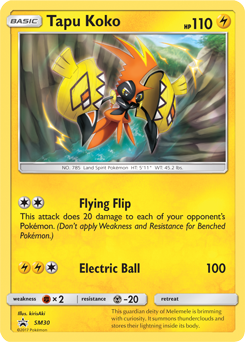 This Tapu Koko has one of the best spread attacks ever printed; it can place 20 damage on all of your opponent’s Pokemon for only two Colorless Energy.  That requirement is easily fulfilled by either Double Colorless Energy or Twin Energy, giving you seven total outs for a one Energy attack!  Tapu Koko also has free Retreat, allowing you to use it as a pivot every single turn.  Overall, this card is very strong and got even stronger with some new inclusions I’ll mention later.