Hello Pokebeach readers, I’m back with yet another article! I hope everyone is doing well (I am, for those wondering) and I am eager to bring to you my first piece of Expanded format content! Last time, I focused on one of my favorite decks in the Standard format, Fossil Lock. I haven’t spent a ton of time on the Standard format since then. However, I have been playing more Expanded format thanks to the recent breath of fresh air brought by the bans of Sableye, Oranguru, Milotic, and Shaymin-EX. I think these bans were a huge step in the right direction when it comes to making the Expanded format a bit more bearable to play, but they are only the beginning of an entire rework I hope to see in the Expanded format. 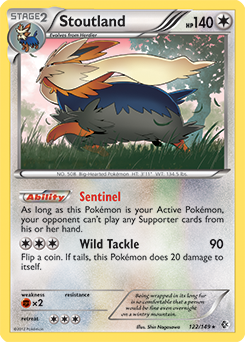 As I am sure most people remember, the Collinsville Regional Championships was heavily dominated by Trevenant and Dusknoir-GX / Milotic, Control decks featuring Sableye or Oranguru, and hyper aggressive decks built around drawing cards with Shaymin-EX. With all of these threats drastically reduced in the current Expanded format, a lot of slower decks that struggled to keep up are able to find their way back into the format. Of these decks, I have spent the most amount of time testing various versions of Stoutland.

At this point, I am sure most people are familiar with “Shock Lock.” Shock Lock was invented a few years ago going into the Daytona Regional Championships by Ross Cawthon and his friends. Since then, the deck has received numerous new tools such as Memory Energy in order to turn it into a powerhouse of the Expanded format with strong and consistent results in the latter half of the 2018-19 season. I fell in love with Shock Lock in mid-2019, thanks to my general fondness for lock decks as a whole. After learning the power of Stoutland through Shock Lock, I tried to come up with my own Stoutland lock deck. I eventually succeeded in producing a similar infinite loop, but one that cannot be broken even by the use of cards like Cobalion-GX. In today’s article, I will be providing an explanation of each of these Stoutland lock decks so that you too can learn the power of the Big-Hearted Pokemon.

Super simple in concept, Shock Lock does exactly what its name states: Keep the opponent in an infinite Paralysis loop. This loop is executed by using Raichu‘s Evoshock on consecutive turns to keep the opponent unable to attack or retreat while Stoutland’s Sentinel Ability stops them from playing Supporter cards like Guzma to escape this lock. Raichu can be looped thanks to Memory Energy paired with Lillipup so you can keep recovering a single Scoop Up Net to continuously pick up Raichu for reuse. Often cited as one of the most aggravating decks of all time, Shock Lock’s simple lock offers a super powerful win condition in a format where true lock decks tend to struggle. Let’s get into the deck list.

As the heart and soul of any Stoutland deck, I stuck with a simple 4-2-3 line. This line allows you to easily find any of the four Lillipup with low risk of it being in the Prize, plus a non-intrusive number of Stoutland so it does not clog up your hand. With two Herdier, you have consistent access to a manual Evolution path while having extra resource recovery options. This is the same line that I have used since I started playing the deck a little over a year ago and I don’t intend to change it. Simply put, this is the perfect count.

Similar to Stoutland, this card is flat out critical to the very concept of the deck, acting as the source of the lock. The thin line is generally okay with the aggressive amount of Pokemon searching options. It is generally irrelevant which Pikachu you play, but I tend to consider the 70 HP Pikachu Promo to be ideal. If you cannot access that one, any 70 HP option is fine. After that, you can go to the Nuzzle Pikachu from XY. Additionally, you only need one Pikachu and one Raichu at a time if you are fortunate with your setup, but typically you need 2-1. Regardless, this quantity leaves you with some wiggle room on what you may Prize.

With Alolan Muk, you have an answer to the pesky anti-Paralysis techs that exist in Expanded such as Cobalion-GX or Comfey. A 1-1 line means you don’t commit too much to it that it becomes a hassle when unneeded, but you can use it when you do need it. Additionally, an early Alolan Muk can slow down your opponent if you need a little buffer while setting up.

This deck’s preferred setup Pokemon is Jirachi-EX for multiple reasons. First, with other consistency options and the deck’s value of “getting what you need” thanks to the simple lock, a search card like Jirachi-EX is much better than something like Dedenne-GX where you have mixed results. Jirachi-EX is preferred over Tapu Lele-GX for two reasons: Level Ball and Scoop Up Net. Both of these cards cater better to Jirachi-EX because it can be searched easily using Level Ball and Scoop Up Net being an easy way to remove it from the board and get it out of harm’s way.

Unfortunately, back in February with the release of Sword & Shield, the rules were changed so you can no longer play a Supporter card on the first turn of the game. As such, Brigette lost a lot of its strength. With no need for a turn 1 Brigette, there is much less need for a second Jirachi-EX, giving us a free spot for something else.

Two AZ, Two Scoop Up Net, and One Pal Pad

Another piece of the lock puzzle, all of these cards combine to create a truly infinite lock. Scoop Up Net is used for a majority of the game, making you pick up the entire Raichu line and re-bench it to use Evoshock again. However, sometimes you are forced to be a bit more aggressive in your play while setting up and you end up with less cards in your deck than your opponent. If that is the case, AZ and Pal Pad combined will save the day. Once you are down to zero cards in your deck, use Pal Pad to recover two AZ and then Lillipup‘s Pickup to recover the Pal Pad. Doing so allows you to have an infinite deck of AZ while gaining an additional Item card in your hand every other turn.

This deck has run Devolution Spray in the past, but thanks to the release of Scoop Up Net in Rebel Clash, the deck has a much more versatile option that can remove Jirachi-EX or damaged Pokemon from the board while serving the same lock purpose.

Honestly, this card is completely unneeded thanks to the Pal Pad plus AZ loop. But sometimes you cannot afford to use another 30 minutes playing through extra turns waiting for your opponent to run out of cards. As a result, Team Rocket's Handiwork is included to make achieving a win condition much faster.

With the debates around the fairness of Tropical Beach, I felt I should mention this card. I personally think this deck is much worse without Tropical Beach, but it is technically playable. If I did not have Tropical Beach myself, I would probably play Snorlax or Zacian V as a form of turn ending draw instead, but I think these Pokemon put a small damper on the deck’s consistency as you lose the versatility of Tropical Beach.

Rounding out the pieces of the lock, Memory Energy is what allows the constant use of Lillipup’s Pickup. These four Energy are the only ones included because the deck does not need any others. With the combination of this decks plethora of draw and search options, it doesn’t struggle to find them when needed. You will never run out of them thanks to the ability to recycle them infinitely with Special Charge if absolutely needed.