Hey everyone! Isaiah back once again with another article! I hope everyone is doing well, both in terms of Pokemon and in terms of their lives as a whole. Last time, I closed with a good luck wish to everyone in the Players Cup II Qualifiers, so I thought that I would start with that.

First off, I unfortunately did not make it to the second phase of Players Cup II on the TCG side, largely due to a rough start to my qualifying tournaments and never being able to recover. However, I was fortunate enough to, unbelievably, barely squeak into the VGC side, in which I promptly went 2-2. Back to my TCG qualification attempt, I mostly played Mewtwo and Mew-GX / Welder while qualifying, but I also spent some time on Arceus and Dialga and Palkia-GX / Zacian V, Pikachu and Zekrom-GX, and more. However, there was one deck in particular that earned me the most amount of Tournament Rep by far, but I will get back to that later.

Across all four regional brackets, the main metagame trends kept consistent, with very few decks outside of the typical decks of the format, being Arceus and Dialga and Palkia-GX / Zacian V, Pikachu and Zekrom-GX, Lucario and Melmetal-GX / Zacian V, Centiskorch VMAX, Eternatus VMAX, and the occasional Mewtwo and Mew-GX variant. Notably, in the European bracket, one player made it to the Top 16 at 5-0 with Excadrill from Cosmic Eclipse (#115), but, unfortunately, on the second day of play, they fell to 5-2 and were eliminated. Following the conclusion of the Regional Brackets, one thing felt certain: Everyone was ready for something to shake up the format. To every player’s relief, Vivid Voltage released the day before the Regional brackets concluded, and, while the set does not add much in the realm of new decks to the format, even some minor deck building changes alongside new decks such as Whimsicott and Charizard, it feels like the Pokemon TCG has received a new breath of life.

However, not every deck has gotten the face lift that some other decks have gotten with Jirachi, Leon, and more. In the case of one particular deck, exactly zero changes are made. Funny enough, this deck is my preferred deck in both the Darkness Ablaze and Vivid Voltage formats: Fossil Lock. I first discovered Fossil Lock as an archetype on social media in mid-October after seeing a player post a deck list. Being an avid fan of control and lock decks, such as Stoutland / Raichu (Shock Lock), Oranguru / Cinccino, and more, I was immediately hooked on the idea. As I mentioned earlier, this deck also happens to be the deck that earned me the most amount of average Tournament Rep per event, earning me an average of 2.13 Tournament Rep across eight events, far exceeding my average of 1.33 Tournament Rep per event with every other deck that I played.

At this point, you may be wondering: What is Fossil Lock? As the name suggests, it uses the combination of the fossil Pokemon Omastar and Cradily to lock a Pokemon such as Dedenne-GX or Crobat V in the Active Spot while slowly running the opponent out of cards. This strategy is pulled off by using Pokémon Research Lab to quickly set up the two Fossil Pokemon while acquiring the combination of Boss's Orders and Yell Horn to drag up the Pokemon you are electing to lock Active and then confuse them, activating Cradily’s Ability to deny the ability to Retreat. In the mean time Omastar being in play locks Item cards, the most important of which is Switch, as it is one of three commonly played outs to Cradily’s retreat lock in the Standard format, the others being Mallow and Lana and Bird Keeper. Without further ado, let’s get into the deck list.

This particular version of the deck list was posted online by someone named Chance Swafford. I was not a huge fan of some counts in the deck list, but this list paved the way to constructing my own list, so I felt the inclusion was necessary. 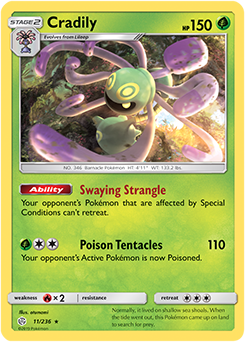 As the core of the lock, it is critical to be able to find Pokemon Research Lab early and then find Omastar and Cradily on the following turn. You certainly need more than one copy of each Pokemon in order to avoid prizing your only copy and losing the game as a result.

In my testing, I have seen minimal need to include any more than two copies of Omastar and Cradily, especially with the ability to find them somewhat easily, but it has crossed my mind. Similarly, going up to a third copy of Omanyte and Lileep has crossed my mind as at least one copy of each needs to be in your deck when you use Pokemon Research Lab, but I have decided against it due to the naturally low odds of prizing both copies of the cards and/or having them in your hand.

Considering the strategy of the deck, any amount of Altaria may seem redundant, let alone three of them. However, that actually could not be farther from correct. Altaria is one of the more critical parts of the deck’s lock, as it removes the necessity for Boss’s Orders in some matchups by making otherwise unlockable Pokemon lockable. Notably, Eternatus VMAX and Arceus and Dialga and Palkia-GX fall into this category. Additionally, against the latter, depending on their deck list and their luck off of Mawile-GX‘s Captivating Wink you can sometimes forgo the Fossil Lock and instead just wall with Altaria to an inevitable victory.

Since January, I have been able to see how incredible this Baby Pokemon is through various control decks in the Expanded format. Munchlax provides the awesome utility of card recovery in a deck that is very resource intensive, needing multiple cards to pull off its complex lock. Oftentimes, I find myself discarding Yell Horn or Boss’s Orders in the early game while I am trying to find my Pokemon Research Lab or any other piece of the combo. In these situations, a heads flip from Munchlax can get back one of these critical pieces, acting almost as a search card for the missing piece of the lock. Additionally, once the lock has actually been established, Munchlax is able to continuously recover resources from the discard pile, allowing you to gain some extra cards in case your deck size is lower than your opponent’s when you pull off the lock.

When we first saw Darkness Ablaze scans, I thought Starly was a bit underwhelming, although its Ability and attack were cool, especially when combined, I thought the lack of a good Evolution while having very low HP was going to prevent the card from being good, but lo and behold, I am finding myself writing about it.

Starly is an amazing card for this deck, acting as the deck’s primary method of building the lock. With four Bird Keeper and a Twin Energy, you are able to consistently use Keen Eye to search for the pieces to complete the lock. I will say though, Starly is a bit awkward at some points, as it is sometimes forced to sit out in the open while you use Pokemon Research Lab to get out Omanyte and Lileep, but with the rarity of hitting 50 on the first turn in the current format, this is seldom an issue.

With the nature of the lock typically hunting for support Pokemon like Dedenne-GX and Crobat V as well as the need for the opponent to have more Pokemon in play than you to trigger Omastar, Mawile-GX is a natural fit in this deck. However, a miss with Captivating Wink can lead to several issues, both in terms of Pokemon in play and in terms of Prize cards that the opponent can take while you are trying to set up.

Bunnelby is pretty straightforward: You use Burrow in order to run the opponent out of cards faster. This card is especially useful in the time constraints of online events, as it allows you to win a game in a short amount of time. In a best-of-three tournament, I would tend to omit the card.

As I said earlier, these two cards are extremely important to the lock, so playing a high count is critical. With four Yell Horn, you maximize your odds of finding the card when you need it. Additionally, you can use Yell Horn early game to slow the opponent’s early game attacks while building up your board. Three Boss's Orders has felt really solid, as it is in a situation of “not too many and not too few.” I have never found myself wanting more than three, but any less has felt wrong as well.

As one of the best stall cards in the game’s history, Lillie's Poké Doll finds a spot in this deck as well. In this naturally slow deck, Lillie’s Poke Doll is a great way to buy time while you are setting up your board. It is especially good on the Pokemon Research Lab turn(s) in order to not give up a Prize while setting up your lock.

One Crushing Hammer is of the most awkward but also genius techs in this deck. In theory, looping Crushing Hammer every turn to keep Energy off of a Pokemon results in a stronger lock, especially against things like Crobat V in Eternatus VMAX. Unfortunately, just playing one copy of Crushing Hammer makes it much harder to loop and flipping Tails becomes far more punishing than it would be if you had multiple copies.