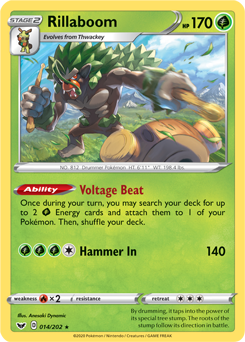 Hello to all PokeBeach readers! My name is Gabriel Pino Semedo and I am pleased to tell you that I am the newest writer for PokeBeach Premium Articles. For players who don’t know me yet, I will make a brief presentation. I’ve been a Pokémon TCG player since 2012, I’m 31 years old and I’ve been writing competitive articles since 2014. My first World Championships was in 2013 and since then I have participated every year, except the years 2017 and 2019 due to work. Some of my results can be seen here, but I believe that my best results are yet to come. My goal is to be a better and better player, trying to learn something new every day. I really enjoy playing Pokémon TCG, especially learning and creating new strategies, so I hope you like the different ideas and decks that I will bring in my next articles.

For my first PokeBeach article, I decided to bring the Rillaboom / Rowlet and Alolan Exeggutor-GX a.k.a. Roweggs. This deck  is not a complete novelty, but it is a deck that recently appeared again in the competitive metagame, precisely because the deck has a favorable matchup against the most successful deck in recent times, Pikachu and Zekrom-GX. It has been difficult to find any deck that has a good matchup against PikaRom other than Coalossal VMAX. And it’s possible to lose.

Having a favorable matchup against the Best Deck In Format (BDIF) is undoubtedly very good, but it is not enough to make a deck competitive. It is necessary to have at least even matchups against several other decks and I think Roweggs is capable of handling several of them. Clearly the deck will have a hard time dealing with some fire decks like Fire Box, MewBox Welder and Baby Blacephalon, but the list I present to you has several outs to make these matchups more playable.

The Rillaboom is the heart of the deck and provides the power needed to attack with the Pokémon we have in the deck. The idea is to build Rillaboom in the first turn with the Super Growth attack of Rowlet & Exeggutor-GX and in theory we need only one Rillaboom on the board during the entire game, but it is important to start to evolve the second Rillaboom throughout the game just in case.

This Pokémon is the reason for making this deck competitive. Thanks to the Super Growth attack it is possible to evolve Rillaboom in a very fast and consistent way, avoiding the traditional evolution problems of a Stage 2 Pokémon. In addition to helping with evolution, Rowlet & Exeggutor-GX is also the main attacker of the deck. Although not a wonderful attack, Calming Hurricane is a reasonable attack but one that can be easily carried out in the second turn. Tropical Hour GX is noteworthy, since its additional effect causes all the energies of the opponent’s field to be shuffled, delaying the setup and strength of the main decks of the format.

The idea of ​​putting this Pokémon came from my friend João Pedro Medeiros while we were testing the deck. The main function of Mewtwo & Mew GX on the deck is to use it in matches against Fire decks, such as Fire Box, Mewtwo and Mew-GX Welder and Baby Blowns instead of Rowlet & Exeggutor to avoid Fire Weakness. Another strength of the Mewtwo & Mew GX is that it can be quickly powered up with the help of Rillaboom, which makes it a great surprise Pokemon to Knock Out the opponent’s Mewtwo & Mew GX.

Dubwool V is a very decent Pokémon, with a good attack and a good HP, in addition to being a good attacker, mainly for Fire decks. The main highlights of this Pokémon is that next to Big Charm it has 270 HP, able to resist even an attack of Zacian V with Altered Creation GX and its Revenge Blast attack can beat up to 270 damage if the opponent has just one Prize.

Roweggs deck is very consistent when setting up and its strategy is very focused on defense. Unlike other metagame decks like PikaRom or Arceus and Dialga and Palkia-GX / Zacian, Roweggs is a deck that doesn’t need as much Dedenne-GX or Crobat V. The idea of ​​not using Dedenne-GX comes precisely from the goal of avoiding offering easy Prizes for the opponent. Dedenne-GX can be targeted by Great Catcher and can be Knocked Out by Cramorant V and Naganadel-GX on some MewBox decks. Crobat V can offer draw power without offering these possibilities, although Dedenne-GX still has a slightly better ability. Eldegoss V‘s main function is to increase the chances of finding Mallow and Lana and Boss's Orders at the right time. 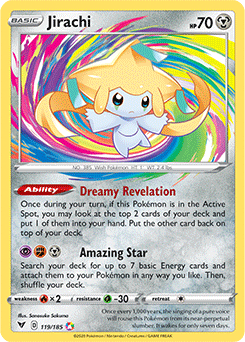 Jirachi was one of the last cards I put on the deck. The idea was simply realized after seeing the list practically finished. I realized the list has many switching cards, such as Mallow & Lana, Bird Keeper, Switch and Air Balloon, besides I realized that there were always slots available on the Bench. In many games my field needs only three or four Pokémon. Therefore, it would be natural to fit at least one copy of Jirachi VIV to make even better use of the cards with switching effects the deck has.

I’m not sure yet if Bird Keeper is the correct Supporter for the deck, but I decided to give it a try and I liked the results so far. I want to avoid using Professor's Research because I don’t feel comfortable dropping my hand with this deck. Bird Keeper has a much lower draw power, but in return you can switch a Pokémon, which is a fundamental effect in the current metagame to get rid of Raichu and Alolan Raichu-GX‘s Tandem Shock’s paralysis. Along with Jirachi VIV, Bird Keeper has an even better effect.

If the idea is to perform the setup without having to discard cards with Dedenne-GX and Professor’s Research, then we need to slow down the opponent’s setup speed or at least disrupt their hand. Marnie allows us to move forward in our setup without letting the opponent collect many cards in hand, somewhat controlling the speed of the game.

I really like Cynthia & Caitlin in decks that play Tag Call. Unlike Guzma and Hala or Mallow & Lana, Cynthia & Caitlin is the only Tag Team Supporter that allows you to actually draw cards; in addition, it already guarantees the Supporter for the next turn. This detail is especially important in a deck that we don’t want to rely on as much on Dedenne-GX or Crobat V to increase the speed and consistency of our setup.

Mallow & Lana is a key card for beating PikaRom, but it also significantly increases the chances of finding a switching card in the deck, since it can be accessed with Tag Call.

I usually like to play at least three copies of Boss’s Orders in most of my decks and obviously it would be nice to use the third copy in this deck too, but in this case we play Mallow & Lana a lot, so just two copies has been enough. It is a deck that we prefer to heal ourselves instead of pulling some Pokémon from the opponent.

If there is a deck where Quick Ball is not the main card to search for Pokémon, perhaps this is one of them. Tag Call has enormous power in this list and this card is able to perform a good part of the deck setup when searching for Rowlet & Exeggutor-GX and Guzma & Hala. In addition to the setup, Tag Call brings consistency when accessing Cynthia & Caitlin and allows easy access to healing and retreat with Mallow & Lana.

Since the deck does not depend on Quick Ball, the main function of this card is to search for Crobat V and Eldegoss V in emergency situations, in addition to increasing the chances of looking for all other Pokémon in the deck throughout the game.