Hello everyone, Isaiah here with another article. With Players Cup II’s qualifying phase coming to a close within the next week, there are quite a few players, myself included, that are trying to make the final push in order to qualify. Personally, I had a bit of a rough stretch early on playing mostly Arceus and Dialga and Palkia-GX / Zacian V and Pikachu and Zekrom-GX variants but I have not given up on qualifying either. 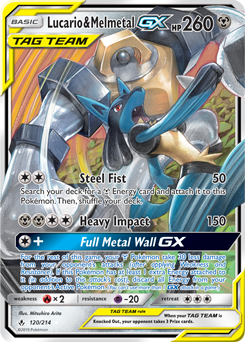 Over the past week, I have been (somewhat desperately) looking for any solution that I can possibly find in order to solve my issue of how to salvage my mediocre run. When asking friends about what they thought could be a good answer, the single most common response was “play Lucario and Melmetal-GX / Zacian V”. Upon doing some personal testing, I wasn’t a huge fan of the Lucario and Melmetal-GX decks. I did not feel comfortable with its middling pace, as I like to play either aggressive decks with lots of options or play controlling decks. Additionally, I felt that it never truly made up for this awkward speed in any other aspect of the deck, as I thought its damage output was a little low and the Fire Weakness proved to make match-ups like Centiskorch VMAX nearly unwinnable. As such, I began trying to find a different option.

At this point, I also started frequently seeing posts about the continued resurgence of Welder decks like the aforementioned Centiskorch VMAX, Blacephalon, and of course, Mewtwo and Mew-GX. The last of which especially caught my eye, as I adored playing Welder / Mewtwo and Mew-GX after my first experiences with it at the 2019 World Championships, but I was later forced away from the deck as increasingly fewer of my events were played in the Standard format between the release of Cosmic Eclipse and the cancellation of the 2020 season. In addition to my love for the deck in the previous season, it had seen proven results in Players Cup II as well as solid finishes in other online events. Around this time, a good friend of mine sent me a decklist for a Welder Toolbox deck, similar in a sense to what won the Latin American International Championships last November, but also vastly different, as this deck embraces the toolbox aspect much more. Shortly afterwards, I saw another friend of mine, Isaiah Bradner, piloting the deck and I was immediately hooked.

At this point, everyone should be familiar with the general strategy of Welder / Mewtwo and Mew-GX. Simply play Welder every single turn of the game, and you will likely win. However, since the Supporter rule changes that came with the Sword & Shield expansion and the loss of Solgaleo-GX with the rotation to Team Up-on, the deck has been forced to make several major adaptations in order to survive. Most of this will be similar to what Stéphane Ivanoff wrote about roughly a month and a half ago, but the deck has undergone some changes as well. Notably, Muk and Alolan Muk-GX has made an appearance, thanks to the power of Poison.

As I highlighted in my previous article, four copies of Mewtwo and Mew-GX are is absolutely critical so that you can find them when you need them and increase the odds of starting it. Unlike the Water variants, you could feasibly go down to three Mewtwo and Mew-GX thanks to your other attacking options, but I do not recommend it.

One of the most critical attacking options in the deck, Reshiram and Charizard-GX boasts a solid damage output from a non-GX attack. In a format heavily focused on various V and VMAX attackers, Flare Strike can easily score a one-hit Knock Out on a Zacian V, Eternatus V, and plenty of others. In addition, Outrage serves as a solid and cheap attacking option to follow up something like a Venom Shot from Naganadel-GX.

With the Supporter rule changes earlier this year, Gengar and Mimikyu-GX has managed to find a spot in quite a few decks such as Expanded’s Trevenant and Dusknoir-GX decks. In Welder / Mewtwo and Mew-GX, Gengar and Mimikyu-GX typically serves the purpose of stunting the opponent’s setup in a variety of ways. Notably, Horror House GX can force Eternatus VMAX decks to “take a turn off” due to their inability to play any cards. This often allows for a Flare Strike on the following turn to not only take two Prizes but to usually remove their turn one Energy attachment as well. Another use for Horror House GX is to take cheap wins on unsuspecting opponents. In testing this deck leading up to this article, I have gotten wins both by making my opponent unable to play down a second Pokemon and by making it so they cannot restore their deck while they are about to run out of cards.

In addition to the usage of Horror House GX, Poltergeist has fantastic utility as well. With an increasing amount of decks featuring Green's Exploration, Clay, and other hand-building Supporter cards, it is far from uncommon for Poltergeist to deal upwards of 300 damage, taking a one-hit Knock Out on any Tag Team.

One Muk and Alolan Muk-GX

Muk and Alolan Muk-GX serves two distinct purposes in this deck: dealing with Decidueye (or Altaria) / Galarian Obstagoon and setting up “checkmate” against VMAX and Tag Team centric decks.

When it comes to Decidueye / Galarian Obstagoon, Deep Forest Camo and Obstruct both specify damage from attacks. As such, Severe Poison and Nasty Goo Mix GX both get around these walls, allowing you to still win the game against something like a lone Decidueye board. Unfortunately, with the rising inclusion of Big Parasol in these decks, you do lose this option.

In my opinion, the checkmate options are the most important factor in making Welder Mewtwo and Mew-GX continue to be viable in the Standard format. Oftentimes, using a Nasty Goo Mix GX with its additional effect paired with a Reset Stamp to a small hand size (typically one to three cards before drawing for turn) leads to a Knock Out on any VMAX or Tag Team. However, unlike most Knock Outs, these Knock Outs are typically taken going into your turn (or exiting your turn in the case of VMAX Pokemon), so you are able to stop your opponent from attacking AND possibly get an extra Knock Out as a result with Venom Shot, Flare Strike, or otherwise.

Charizard-GX is the most critical piece of your “Prize Map” in any Tag Team match-up, as Flare Blitz GX is an instant Knock Out on any Tag Team (barring the inclusion of Big Charm on Arceus and Dialga and Palkia-GX, Full Metal Wall GX, etc.). Most of the time, your early turns against a deck like Arceus and Dialga and Palkia-GX / Zacian V will be filled with digging for the pieces to achieve a Flare Blitz GX and then that momentum can typically carry you to a victory within the next few turns. In addition to Flare Blitz GX, Flamethrower is a decent attack, but is seldom used.

Without Aurora Energy, Naganadel-GX‘s sole purpose lies in Venom Shot. I’ve already mentioned it’s most significant applications by pairing it with Muk and Alolan Muk-GX’s Nasty Goo Mix GX, but I felt it was worth reminding that Venom Shot is a fantastic tool to pick off any Dedenne-GX as well as setting up later Knock Outs on bigger threats. I would confidently call this one of the best cards in the deck, even if it is not used every game. 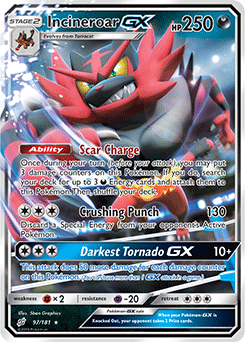 I actually have not done a lot of testing with Incineroar-GX in this variant. With that being said, I think it does serve a unique purpose, so I included it in the list I provided. The biggest thing about Incineroar-GX in this deck is that it provides cost-efficient flat damage. When paired with Flare Strike, it easily knocks out any of the VMAX Pokemon and it can even discard Special Energy in the process, sometimes setting the opponent back. I considered Heatran-GX for this role too, but I felt that Incineroar-GX’s Darkest Tornado GX was stronger than Hot Burn GX would be in a deck that also had Charizard-GX. Aside from Eternatus VMAX, most VMAXs have to two-hit Knock Out Mewtwo and Mew-GX, so Darkest Tornado GX allows for an immediate response, typically dealing excessive amounts of damage.

With a strong Energy accelerating attack, Victini V  has quickly become a staple in Welder / Mewtwo and Mew-GX. I certainly do not get to use Victini V every game and frequently consider cutting it, but with the increasing popularity of Lucario and Melmetal-GX and its Full Metal Wall GX, recovering lost Energy is a nice option. Additionally, Energy Burst is a strong attack against any Zacian V, typically delivering a one-hit Knock Out.

Indeedee V often feels like the deck’s dark horse, seeing minimal use in most matchups due to its mediocre HP relative to other Pokemon V as well as a lackluster damage output against most decks. There is one matchup where Indeedee V shines though, being the Centiskorch VMAX matchup. Due to the inherent nature of how G-Max Centiferno works, Indeedee V’s Psychic will frequently take one-hit Knock Outs, making the previously even matchup much more favorable.

With the recent increase in usage of Power Plant and Chaotic Swell, Marshadow has become much more important, as both of those Stadiums significantly stunt the power of Mewtwo and Mew-GX and Giant Hearth respectively. Against decks that do not play either of those Stadiums, Marshadow is typically discarded, but it occasionally allows exploit Stadium mechanics with the rather unique play of using a Giant Hearth that is already in play, using Resetting Hole, and then playing and using a second Giant Hearth from your hand.

Due to the brutal importance of hitting Welder for two Fire Energy as often as possible, there are a ton of tools here to find the combination of Welder and two Fire Energy as much as possible. In my testing, I have mostly had four Pokégear 3.0 and four Giant Hearth, but I felt I had them clogging my hand sometimes, so I removed one of each. Down the road, I may try to bump both of those counts back up to four, but I am uncertain on which is ideal at this time. Additionally, a reasonable case could be made for cutting one Fire Energy for a Fire Crystal, but I have not gotten to test that yet.