Hello Pokebeach readers! I am back once again with some more Standard format Pokemon talk! The Players Cup II and other recent online tournaments have provided the world of Pokemon with some pretty exciting decks to take a look at and try out. While some of the more expected decks have had strong results, such as Arceus and Dialga and Palkia-GX and Pikachu and Zekrom-GX some of the less hyped decks have done the same. At the beginning of the new format, Welder decks saw a huge dive in representation while the format was dominated by Eternatus VMAX and Arceus and Dialga and Palkia-GX. During this time I can honestly say I thought Blacephalon was being very undervalued and that Centiskorch VMAX was just in its appropriate spot in the meta, but my opinion has changed over time. I still believe Blacephalon has some potential, but I also was not giving Centiskorch VMAX the respect it deserves. In my last article, I mentioned that both of these fire decks had been seeing a rise in play, and while that is true, one version in particular stood out to me. Tord Reklev played some of his Players Cup II run with Centiskorch VMAX / Magneton, a Welder deck that truly contains the issues that some of the other variants have. On top of this, it is an interesting and consistent deck that is less susceptible to some of the less fun parts of the current metagame. With that being said, a majority of this article is going to be taking a look at this deck! I hope you are as excited as I am. Let’s get started. 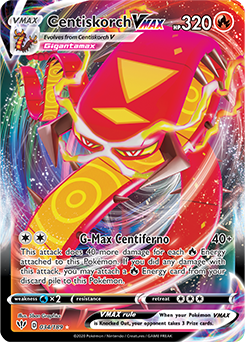 So, the issue that the more mainstream version of Centiskorch VMAX faces is that it does not win the game fast enough. This is because the slower damage output is not enough pressure on the opponent, and decks like Arceus and Dialga and Palkia-GX will just feed on your Bench sitters and end the game very quickly. The difference here should be fairly obvious, this deck does not have any Bench sitters and uses that space to focus on the Lt. Surge's Strategy and Welder combo. Magneton is the key to this of course, as it activates Lt. Surge’s Strategy and searches out an array of supporters for your immediate use. This can mean using Welder twice right away, which really speeds thing up. The other advantages to this version of the deck are that it is more consistent and can make great use of Reset Stamp, something that I praised in recent articles. I will also say that this is one of the decks that feels much less reliant on drawing very well on the first turn and taking over the game, which is a nice feeling. It does not rely on flip cards nor does it get crushed by a string of successful flip cards, which is another bonus for the deck.

These Volcanion play a crucial role in this deck for multiple reasons. Obviously going second and using Flare Starter is incredibly strong because it allows for an explosive start and protects your Centiskorch V by leaving it on the Bench. The sacrifice of this Pokemon is fine because you can give up a Prize with Magneton and then make it so the only Pokemon you have in play are Centiskorch VMAX. This means the Prizes you gave up were pointless for the opponent because they will still have to Knock Out both of your VMAX Pokemon to win the game. This even opens up the opportunity to attack with Volcanion in some games because it is essentially free damage.

I have preached the importance of this card for ages now, including the maximum count of four in a majority of my decks. The thing with Boss's Orders in this deck, though, is that it is a bit harder to use. Not only does it mean you are not using Welder, unless Lt. Surge’s Strategy is involved of course, but it is literally harder to use because you don’t have the same level of draw power that other decks do. This makes the card harder to use in the sense that you can’t use it and draw a lot of cards in the same turn, nor is it easy to find without using Magneton. It is still included, though, because it is still a very good card that can be searched out with Magneton or Green's Exploration. You basically have to include some amount of Boss’s Orders in every deck nowadays, even if it is a tad awkward to use.

This card is very situational, as with the right board state it draws you a whopping eight cards! You do have to only have one Pokemon in play, which basically means you just popped a Magneton and now only have a Centiskorch V or VMAX in play. There are situations where grabbing Kabu and building up a huge hand is a strong move at that point in the game, so I have one included in the deck for those situations. Some lists play four and make it a huge part of the deck, but I have found its inclusion to be better served as an option rather than a focus. Trying out a list with a heavier count of this is definitely not bad though, so feel free to give that a try if it appeals to you!