Hello PokeBeach readers! For my second article, I’m going to be talking about a sleeper deck that could be a good option during the Pokemon Players Cup II. In addition, I will be going over my successes and failures during the Players Cup II while piloting a Dragapult VMAX deck that you may have read about in my last article.

The sleeper deck I will be discussing focuses on Decidueye. Decidueye was a card that I thought was mediocre when it was first revealed. However, the Players Cup II and other online events has seen players become greedier with their deck lists — removing techs against Tier 2 and Tier 3 decks and hoping to prey on Zacian V and Eternatus VMAX decks. This means there is a lack of single Prize attackers in nearly every deck or at least in Zacian V and Eternatus VMAX decks. 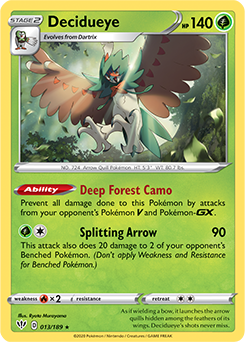 The Players Cup II has seen Arceus and Dialga and Palkia-GX (ADP) / Zacian V cement itself as the best deck in format. Naturally, everyone is trying to get a leg up against this matchup. I think the best way to do this is to lock them out of the game using Decidueye, forcing them to have a single Prize answer or lose. The other way ADP / Zacian V decks are dealing with the Decidueye matchup is Mawile-GX. Mawile-GX’s Ability will force us to bench Pokemon in our hand, giving the opponent targets to use Boss's Orders to take cheap and easy Prizes. However, as most lists only run one copy of Mawile-GX, once it’s played they can’t do it again. The best option to play around this card is to discard all Basic Pokemon in your hand. With a plethora of discarding options, this plan works well unless your opponent uses Marnie to leave you with plenty of Basic Pokemon in hand. But there is a solution for that, which I will get into as I go over the deck list.

For other matchups such as Eternatus VMAX or Lucario and Melmetal-GX, the game plan is simple — set up a Decidueye or Galarian Obstagoon and go from there. Against Eternatus VMAX, the only single Prize attacker they run is Hoopa and the occasional Spiritomb. Neither of these cards can beat out the onslaught of Decidueye this deck is able to produce. Hoopa lacks the damage output to get any big one shots but has enough HP to KO one Decidueye. Spiritomb can get a OHKO, but it has to damage itself over multiple turns so a Boss’s Orders play or a snipe from Decidueye’s Splitting Arrow attack can easily throw a wrench in that plan. As for Lucario and Melmetal-GX players, they don’t have any options in their current lists to deal with Galarian Obstagoon. One thing you have to keep in mind is their GX attack. But with Big Parasol attached to your Pokemon, they would need a Tool Scrapper to remove your Energy cards. Overall, both of these matchups are very easy for the Decidueye / Galarian Obstagoon player. Once you’re set up, they can’t do much.

This deck list is very straightforward. It is all about maintaining the lock and keeping the deck consistent.

The core of this deck is Decidueye. Galarian Obstagoon is more of a backup for specific decks that have an answer for Decidueye but nothing against Galarian Obstagoon. Many decks that run Stage 2 Pokemon tend to play a count of three, but because Decidueye is the main attacker rather than a support Pokemon, it is crucial to set them up as consistently as possible so playing four makes sense. Playing four Decidueye allows you to be more frugal when you need to discard cards from hand. With four Decidueye and two Ordinary Rod, it is hard to run out of attackers in this deck.

As I said in my previous article, I don’t think a Jirachi engine is very good anymore. However in a Stage 2 deck that is willing to give up five Prizes before locking the opponent out of the game, it is okay to have this slower engine to help build your hand and set up for the late game. Jirachi’s biggest lost was Escape Board, but when the deck doesn’t need to constantly switch between multiple Jirachi and the attacker, Jirachi is a very good set up card especially when you need to find Rare Candy.