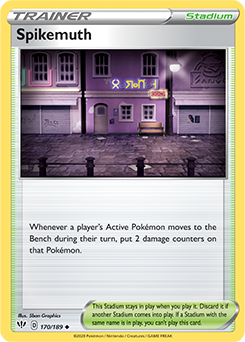 Have you heard of Eternatus VMAX? Dealing 270 damage for two Energy is pretty strong, but what if I were to tell you that there’s another Darkness-type Pokemon that can deal 310 damage for only one Energy? And it’s a Basic Pokemon that only gives away one Prize? That’s right, I’m talking about Spiritomb!

Spiritomb was already a solid deck in the Rebel Clash metagame, but two key cards in Darkness Ablaze could turn it into an absolute terror. Cape of Toughness adds +50 HP to give Spiritomb 110 HP. This means it can hold up to 10 damage counters so its Anguish Cry attack deals 310 damage maximum. Sure, Tool Scrapper can be very dangerous when you put more than six damage counters on a Spiritomb, but this card is scarcely seen. Plus you can play around it as I’ll discuss later on.

It is not an exaggeration to say that Spiritomb can trade favorably with some three Prize Pokemon. I’ve oneshot a Lucario and Melmetal-GX that used its GX attack and had a Metal Frying Pan attached (with the help of Galarian Zigzagoon). I’ve won games against Arceus and Dialga and Palkia-GX because I dealt 280 damage to it on turn 2.

Here’s another argument if the deck doesn’t appeal to you: Spiritomb is fun to play! In order to make the most out of Spikemuth’s effect, you need to play plenty of mobility cards that makes last season’s Jirachi / Zapdos deck jealous. Figuring out in which order to play these cards to achieve the best result (including using as many Jirachi’s Stellar Wish as you can) is a pretty fun exercise! If you enjoy this sequencing minigame in decks like Granbull or Archie’s Blastoise, you’ll like this new version of Spiritomb.

I’ll explain how to build the deck and give tips on how to play it well. I’ll add my thoughts too on its viability in the metagame and what to expect for its main matchups. The short version is that it’s a solid deck that’s faster and has more versatility than similar one-Prize archetypes such as Mad Party and Blacephalon. But it is weak to similar decks with Arceus and Dialga and Palkia-GX / Zacian V being the main culprit. On the bright side, there are issues that other one-Prize decks have that Spiritomb deals better with. Spiritomb is definitely strong enough to make Day 2 in the POG Championships. It’s easy to build as it doesn’t require any rare cards from Darkness Ablaze.

That’s the short version. I hope you stick around for the long version!