Hey readers, it’s Charlie, and I’m super excited to be back with another article! With the beginning of the Pokemon Players Cup this month, official events are (kinda) back, but I am not playing in these events because I don’t have any tickets. Instead, I chose to cover the history of a deck concept that is currently dominating the PTCGO Expanded Ladder: Donk decks!

The term “donk” refers to when a player wins the game on their first turn by removing all of the opponent’s Pokemon from play. While this sometimes happens due to bad luck, there are some decks that build an entire strategy around the concept of pulling off the donk. However, since Donk decks often make the game incredibly luck-based and unfun, many cards have been banned, rules have been changed, and entire formats have even been rotated to prevent this strategy from becoming mainstream. Without further adieu, here is a little history on Donk decks of the past!

History of the Donk

Wizards of the Coast Era: Unlikely, but Possible

In this era, there were no restrictions on the player who went first, which often makes Donk decks incredibly common in a format. However, when Pokemon did so little damage, getting a turn 1 donk often came down to the opposing Pokemon’s Weakness. The only “donk-exclusive” deck I know of from this format involves Erika’s Jigglypuff and Lt. Surge’s Treaty, which aims to draw all of your Prize Cards and take a KO with Erika’s Jigglypuff as early as turn 1. However, this deck has many fatal flaws and never saw much success. Overall, donks were much more a part of the game than an exclusive deck in this format.

In this format, players going first could not draw a card or play a Supporter, but they were still allowed to use an attack. However, the Basic Pokemon in this format were not often dishing out enough damage to pull off donks and the support Pokemon were relatively lacking. This format had very little donks, so I won’t be covering any decks from it.

With the release of Diamond and Pearl, players were no longer allowed to play any Trainers, Supporters, or Stadiums on the first turn. While this rule helped to lower the number of donks, the release of powerful turn 1 attackers like Shuppet and incredible support Pokemon like Uxie made pulling off donks all the more possible. Decks focused exclusively on using Uxie’s Psychic Restore in combination with powerful cards like Expert Belt, Pluspower, and Crobat G allowed players to easily put enough damage counters on the board to Knock Out all opposing Pokemon on the first turn. Donks also inadvertently happened due to mainstream attackers like Garchomp C having cheap and powerful attacks that could be used going first. Overall, this era had incredible cards that made Donk decks insanely powerful, but the first turn rules kept things from getting out of hand. However, the release of Black and White blew the top off of this powerful strategy.

Immediately upon release of the Black and White expansion, donk was primed for ridiculous levels of success. The new generation brought about a return of the no-restrictions turn 1 and immediately created an incredibly powerful Donk deck that ended up forcing the rotation of seven sets: ‘Sabledonk’. This powerful strategy centred around starting with Sableye, abusing cards like Crobat G, Uxie, Expert Belt, Poké Blower +, Seeker, and Darkness Energy in order to nearly guarantee a first turn victory. A video was made back in 2011 that showed how this powerful strategy was able to take down multiple benched Pokemon and the opponent’s Active Pokemon on the first turn.

As a response, TPCi chose to rotate all sets from Majestic Dawn to Arceus before the Canadian and US National Championships that year. However, this did not entirely kill donking, as Baby Pokemon like Tyrogue were able to donk other popular Baby Pokemon like Cleffa on the first turn.

As more sets were released, the popular meta decks in the format were almost all equipped to pull off a donk of some sort through 2012. Powerful and fast decks like Zekrom / Pachirisu / Shaymin and Big Basic decks relying on Mewtwo-EX and Darkrai-EX could often take out opposing low-HP Pokemon on the first turn as well. This continued, albeit to a lesser extent, throughout the entire time when attacks were legal on the first turn. We even saw decks like Shiftry banned due to toxic donk combinations. Overall, this format had way too many combinations and a first turn rule set that was incredibly conducive to donks. 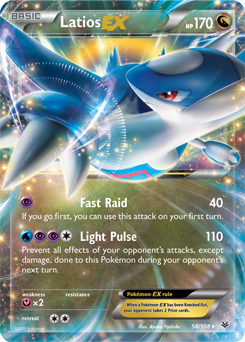 Right before the release of XY, Pokemon announced that players would no longer be able to attack on the first turn. This was a destructive hit to donk strategies, and pretty much removed the concept from the game for a while unless one player drew exceedingly poor. However, in Roaring Skies, the infamous Latios-EX was released (fittingly alongside Shaymin-EX), officially making donk a semi-viable strategy again.

While many players tried to make decks with the new Latios-EX, nobody found success outside of future World Champion Shintaro Ito, who won a Rayquaza Mega Battle in Japan. Incredibly broken cards like Lysandre's Trump Card were also legal at this time, so strategies like this could draw through the entire deck twice on the first turn of the game and abuse PlusPower up to eight times in one turn.

In combination with a few other damage modifiers, like Muscle Band and Hypnotoxic Laser, Latios-EX could hit up to 180 damage and OHKO Pokemon-EX going first!

Overall, this era was pretty much donk-free outside of Latios-EX. Stuff didn’t begin to heat up again until now.

Sun and Moon/Sword and Shield: Expanding on Donk

In the modern era, exclusive Donk decks are almost entirely limited to the Expanded format, but at this moment, they are incredibly powerful. While the release of a few key cards over the years may have gone unnoticed, like Pheromosa-GX and Beast Energy Prism Star increasing the damage cap of a first-turn attack, the recent release of Galarian Zigzagoon and Scoop Up Net has made the strategy better than ever in a Pokemon-sanctioned format.

Since PTCGO’s Expanded Format is now slightly relevant, my friend, Isaiah Cheville, and I have been working on optimizing a 2020 Donk deck to dominate PTCGO Expanded tournaments. This current list pretty much needs to go first in order to win, its success rate of scoring Knock Outs on Pokemon over 200 HP going first is approaching 90%. Here’s the list for the deck: