I vehemently hate Gardevoir and Sylveon-GX, but now it won a Regionals. Will I respect it more as a deck? Probably not. I played Doll Stall for the tournament along with most of my group. The others landed on Malamar / Ultra Necrozma-GX, something we tested a lot but I wasn’t confident enough in its consistency to play it for a major event. It served most of the others well though, with Daniel Altavilla and Michael Pramawat placing in the Top 16 and Top 32, respectively. I myself got 35th at the second Regionals in a row, continuing my cold streak during Day 2. I’m disappointed not to at least make cash, but the deck was strong and I don’t regret the choice. Azul Garcia Griego, Grant Manley, Isaiah Williams, and Jimmy Pendarvis also made it to Day 2 with the build, getting Top 32, Top 8, Top 4, and Top 16, respectively. It stinks to be the odd man out in a lineup of impressive finishes, but there’s always next time. 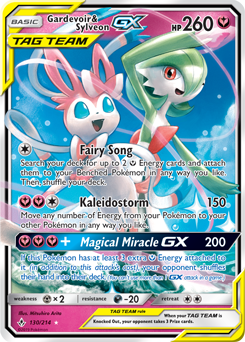 Once again, I did not predict Gardevoir and Sylveon-GX to do even remotely well. It’s interesting that both copies of the deck which made Day 2 also made the Top 8. The deck was not positioned well because of a poor matchup spread — since I’ve ripped on the deck so much I should probably defend this a bit. Going into the event, I assigned the deck the following matchup spread:

As you can see, by this count the deck did not look good. Its matchups are polarizing — they’re good or bad with little room in between — there’s not much you can do to beat bad matchups when you’re paired up with them. In any case, Dean Nezam and Drew Cate were able to take Top 8 and first place respectively, so congrats to them! I expect the subtle Gardevoir and Sylveon-GX techs to return to decks that had previously taken them out like Arceus and Dialga and Palkia-GX builds. Subtle because they’re so easy to fit, it’s usually just a card or two at most. So now for the rest!

Arceus and Dialga and Palkia-GX

Those playing this deck made a gamble that Welder Toolbox wouldn’t be popular and instead opted for an incredibly tech-based list with ways to beat control decks. This was ultimately an amazing decision as both Florges and Pidgeotto were seen around the room. I didn’t play against an Arceus and Dialga and Palkia-GX personally, but many of my friends did and they all lost pretty spectacularly, especially against the build Will Jenkins used. In any case, this deck turned out to be a great call with favorable matchups against control, Malamar decks, and Mewtwo and Mew-GX, thanks to two Keldeo-GX. The Blacephalon / Pidgeotto matchup was rough as well but that deck didn’t do as well as most expected and you can beat it as Arceus and Dialga and Palkia-GX with Reset Stamp and Custom Catcher.

Tier Two with Neutral Outlook: I don’t see this deck doing better than it did at Daytona Beach, I think it can only get worse. Likely, we’ll maybe even see more Gardevoir and Sylveon-GX in the future which should only impair this Fairy-weak deck from seeing continued success.

This was one of the highest played decks this weekend and it severely underperformed. This is reasonable since it was one of the decks that most things wanted to beat. It’s not easily countered since it’s a non-GX deck in a metagame filled without them but suffered mainly because control decks saw a showing and Malamar did better than expected. Both are terrible matchups for this deck, so only if either of those go into decline will Blacephalon see sunny skies again.

Tier Two with Positive Outlook: Things look alright for this deck with Doll Stall likely falling off. That was formerly one of your hardest matchups, arguably impossible, and without it, things will be much easier. Nearly all the TAG TEAM Pokemon-GX decks are easy, aside from Mewtwo and Mew-GX using Cross Division GX to wipe your board. Malamar should fall down a bit, too, making this a better play even still.

I haven’t particularly cared about how this deck does at events for some time now, especially since most decks can beat it. It’s super linear, somewhat inconsistent, and usually not nearly as popular as its non-GX counterpart these days. I’m not shocked a couple made Day 2 but neither did particularly well.

Tier Three with Neutral Outlook: Big Blacephalon-GX is just destined for a bottom-tier dwelling for the near future with no amazingly great matchups and most decks being so relatively unconcerned with it that techs aren’t even warranted to beat it.