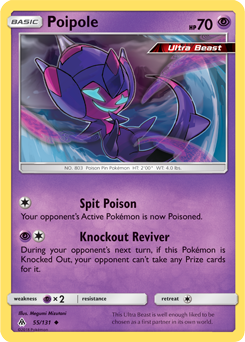 What’s up PokeBeach readers! I’m really happy to be back writing another article. I just came off my first tournament of the season, Daytona Regionals, this past weekend playing an interesting variant of Poipole Stall. In this article, I’ll detail the list, its matchups, and where it is and isn’t appropriate to be played.

In Daytona Beach, I went 5-3-1 with my losses being to two Malamar (both incredibly close) and Alex Schemanske’s Blacephalon-GX / Naganadel (I played like a four-year-old). Here’s the full list of matchups:

R3: Arceus and Dialga and Palkia-GX with Phione and Druddigon, WLW (stream)

R6: ADP with Rosa and Custom Catcher (no Phione), LWT

Poipole Stall works by infinitely spamming Poipole’s Knockout Reviver attack so that your opponent can never take Prize cards for a Knockout. With the use of Malamar, Lusamine, Brock's Grit, and Recycle Energy, you can infinitely recover and power up Poipole until you inevitably win the game through deck out. If you play well, this deck can handle almost everything the format has to offer in one way or another.

Here’s the list I played in Daytona this past weekend:

The list is REALLY tight as is, so I’ll explain some of the counts before going into some of the other cards I tried.

Even with Brock’s Grit giving you infinite Poipole, the more Poipole you play, the less you need to play Brock’s Grit. No-brainer inclusion here.

I tinkered with 3-2, but prizing a Malamar is too risky to go below three copies. One in play usually suffices, but setting up a second is important in matchups like straight Malamar and anything else in which you need to do more than just infinite loop your Poipole.

I’ve wanted the fourth copy in here for a while, but it just doesn’t fit. Three suffices for the mid-game however, so as long as you can set up the no-Jirachi Poipole Loop (I’ll discuss types of Poipole Loops later), you don’t actually need more Jirachi. Great card to set up in the early game, however. 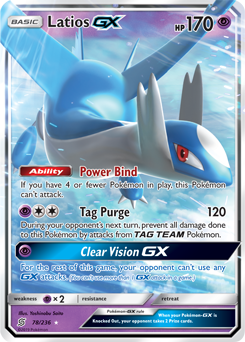 I play two copies of Latios-GX due to its importance in both the Mewtwo and Mew-GX and Arceus and Dialga and Palkia-GX matchups. Getting off Clear Vision GX as fast as possible is critical in both matchups to stop Cross Division GX (gives Mewtwo a huge Prize lead) and Altered Creation GX (wins ADP the game if they play Phione and makes it hard if they play Custom Catcher). It’s also a free retreater and you can attach Shedinja to it if you’re worried about it getting targeted with Great Catcher, so two Latios felt really strong to me.

One Nincada, One Shedinja

This originally made it into the deck as a way to counter ADP decks that played Phione. Assuming you were able to use Clear Vision GX before Altered Creation GX, putting Shedinja on one of your Benched Pokemon allows you to force your opponent to take zero Prize cards even when they use Phione. Through your ability to infinitely recycle Shedinja and the fact that once their deck is thin enough to consistently hit Phione it will also be thin enough to hedge your bets on milling it with Bellelba and Brycen-Man, ADP becomes much more manageable.

This card is critical for the Mewtwo matchup and anything else that plays snipe cards; but once you get it in play, the game should be locked. I considered a second copy, but its uses are usually just limited to Mewtwo and Malamar so only one sufficed. As long as you don’t Prize your one copy, you should be fine because of Brock’s Grit.

I included Blacephalon from Cosmic Eclipse as a piece of the anti-Control combo that involves Naganadel-GX, but its uses are much more widespread. Sometimes, taking Knockouts is necessary to win; cards like Victini Prism Star, Mew, and opposing Blacephalon can be incredibly problematic if not dealt with. Blacephalon makes these threats easy to Knock Out (even on the Bench) while also being an Ultra Beast and obliterating Control variants. This is by far the best main attacker to play.

The other piece of the anti-Control combo, Naganadel-GX, is necessary to put your opponent down to three remaining Prize cards in order to get the full effect of Fireworks Bomb. Pulling this combo off against Oranguru / Pidgeotto Control or Doll Stall almost guarantees a win. You can even attach Shedinja to Blacephalon in anticipation of a Knockout from an opposing Spiritomb or Articuno-GX! If you expect any Control decks in the meta, I’d recommend including Naganadel-GX.

I included Dedenne-GX in order to boost consistency; my testing games revealed the need for another way to dig in order to hit Clear Vision GX or get out of a dead hand. You can discard Dedenne with Bellelba & Brycen-Man or attach Shedinja to it, so it’s rarely that much of a liability. I like having this card in the deck for consistency.

I play the Ditto Prism Star only because it can evolve into Shedinja in the early game if need be. It’s really strong if you play Shedinja, but not as strong if you don’t. Better than the 4th Inkay for sure.

This deck plays 22 Pokemon and most of them are Psychic; maxing out on both these counts is critical.

Two Escape Board, One Switch

The two Escape Board are critical for retreating Jirachi in the early and mid-game, but I added in the Switch as a counter to Absol before you set up Double Poipole Loop. You can switch to a third Escape Board, but I’m a big fan of the Switch in here.