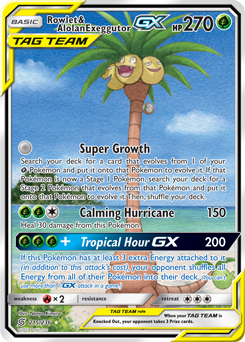 I played against JW Kriewall in the second round of Virginia Regionals, and when he flipped over a Rowlet and Alolan Exeggutor-GX I immediately assumed he would be running a Mewtwo and Mew-GX deck. When he went first and used Brigette to snag three Oddish I was genuinely confused. I started to think of a few different things it could be and ultimately decided it was probably an attacking Vileplume deck. This was scary and I was worried that he would start using Disgusting Pollen to stop my Oranguru (I was playing Zoroark-GX Control) from attacking altogether. The game went a little differently than expected. I had a few strategies developed like using Guzma to put up his Vileplume and denying Energy with Plumeria. Neither of those strategies went well however, as he had four AZ to get the Vileplume out of the trap and Brock's Grit to recover oodles of Energy.

I took a rough loss after a long game one and was immediately a little disheartened about my prospects of winning the event with other players undoubtedly running this frighteningly strong deck. Before I go further, here’s the list my group and I played:

What We Played and Why