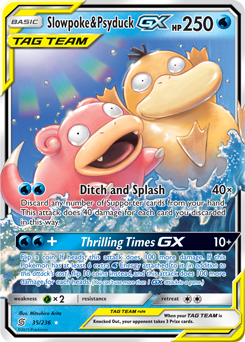 Hello everyone! This is Grant Manley once again. This time I’ll be going over some very underrated decks that I’ve been working on. Most of the main meta decks feel horrible to play for me. I have never really considered playing anything like Mewtwo and Mew-GX or Reshiram and Charizard-GX recently. Aside from Pidgeotto and Malamar, I’ve also been playing some games with the format’s two under appreciated Water decks. I think that both Quagsire and Slowpoke and Psyduck-GX deserve more attention than they’ve been getting thus far, and I believe they can do well in a competitive setting. In fact, Quagsire took two Top 16 spots at the recent Atlantic City Regional.

As for SlowDuck, Pokebeach staff member Sam VerNooy wrote an article about his 9th place Open run with the deck not too long ago. Since then, I have played and updated the list a little bit. However, the deck has not been played at events. I seriously considered it for my League Cups, but I always default to Malamar because of the popularity of Blacephalon-GX in my area, which I believe to be a bad matchup for SlowDuck despite the latter’s type advantage. Anyway, let’s take a look at these decks and see why they deserve to see competitive play.

With the Psychic Energy in the deck, I opted for one copy of the new Poipole, which can also be a great finisher that doesn’t require six Energy. It’s totally reasonable to choose not to run Espeon and Deoxys though. If you go that route, I would recommend adding either a Pokégear 3.0 or an Erika's Hospitality in one of the spots, and either another Mysterious Treasure, Viridian Forest, or one of the aforementioned two cards in the other spot left by Espeon and Deoxys and the Psychic Energy. Of course, the Poipole would also have to be reverted to a more usable one.

All of that said, I currently have Espeon and Deoxys because it’s a powerful finisher. The Top 8 Malamar list that Michael Catron list used at Atlantic City did not run Latios, so it’s a reasonable assumption that many will follow. This makes Espeon and Deoxys an effective counter to Malamar. In fact, the only list that actually runs Latios is my Cup list. While I’ve seen consistent success at lower level competitions with it, Latios in Malamar has yet to see that big stage spotlight.

Now let’s talk about Zebstrika. I’m honestly a little surprised that I have yet to see another Quagsire list playing Zebstrika. Zebstrika adds loads of consistency to the deck. Having that extra draw power goes a long way in letting you find all the pieces you need to attack or just set up more Pokemon. I will say that you won’t use Zebstrika in every game, as you don’t want to go out of your way to set it up. Early game Communications are often best used for Wooper and Quagsire. However, if you already have one Zebstrika piece in hand, Communication for the other piece is great value. It isn’t uncommon to draw into Blitzle, Ditto, or even Zebstrika on your first turn. If you do, that makes it easy to set up the line and get it going for the rest of the game. After Turn 1, most cards in this deck are immediately playable or disposable, making Sprint’s downside unimportant.

I actually tried out a 2-2 line of Zebstrika for awhile, just to increase the odds of drawing into them early game. However, I found this heavy of a line to be excessive. The excess pieces were useless later in the game, and most other cards you can play in the spots have better value overall. 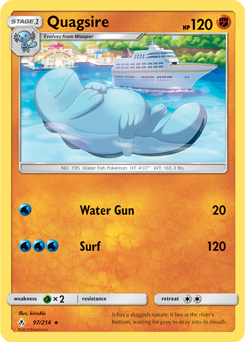 To be honest, running only three Water-type Quagsire hurts a lot. I would love to run four of the Water-type and one Fighting-type, but unfortunately we must choose. I believe that the Quagsire from Unbroken Bonds is a necessary evil. With some Pikachu and Zekrom-GX decks running Power Plant, we cannot rely on Keldeo-GX for that matchup anymore. Quagsire OHKO’s a Pikachu and Zekrom easily. If you get it set up early enough, it can potentially deny or delay a full-power Tag Bolt GX. While the PikaRom with Power Plant matchup is still rough, Quagsire offers the deck a fighting chance with a quick response option to PikaRom’s aggressiveness. If Quagsire can scoop up three Prizes in one shot, that leaves only three more Prizes to be taken at any time, and with any other combination of attackers.

Onix is another consideration, but I believe it is slightly inferior for two reasons. First, the four-Energy requirement, while only one more than Quagsire, makes a huge difference early-game. It’s much harder to use Onix than Quagsire if you’re trying to take out a Pikachu and Zekrom as early as Turn 2 or Turn 3. Additionally, Onix sort of takes an extra deck slot. If I was playing Onix, I would be absolutely compelled to play four Water-type Quagsire, which is an extra spot overall. The only reason I’m not already doing so is because the Fighting Quagsire takes that spot, as running five Quagsire is obviously not allowed.

Keldeo-GX may not be quite as disruptive as it was at the beginning of this format, but it can still win some matchups on it’s own. In particular, both Azul’s Atlantic City winning Mewthree list and two of the Top 8 PikaRom lists cannot fight through multiple Keldeo. Keldeo can also find itself useful in certain situations against Reshiram and Charizard-GX variants. Its GX attack can potentially be devastating against PikaRom as well, though they can play around it most of the time.

Against Mewtwo and Mew, the matchup really depends on the opponent’s list. Some lists only have Double Blaze GX as an answer to Keldeo-GX. Past that, they are powerless against Keldeo’s Ability. However, you have to be cautious because a surprise Turtonator can cause issues. Tord’s Cologne winning Mewtwo list has a few answers to Keldeo, so that matchup is not easy. That said, they are forced to find their one-of Water Energy to use Greninja-GX, which could prove difficult if you refrain from playing down Viridian Forest. Additionally, they must use Weakness Guard Energy to avoid being OHKO’d by Naganadel’s Turning Point turn. You are forced to play somewhat normally against this variant, and cannot rely on Keldeo alone to defend the entire game.

Similarly, the PikaRom matchup also depends on the opponent’s list. Multiple Power Plants make the matchup unfavorable, even with Quagsire. That said, Quagsire can definitely win with favorable draws. It’s not an auto-loss by any means. Against lists with no Power Plant, multiple Keldeo-GX can slowly fight through PikaRom, as they have very limited options to respond. I haven’t tested against lists with one Power Plant, but this is likely the closest matchup, where Quagsire will be most useful.

People have been saying that Ability ReshiZard stomps Quagsire, but I’ve found this to be untrue. With average draws, Quagsire trades one for one at worst against Ability ReshiZard. Additionally, Quagsire easily OHKO’s Heatran-GX and Reshiram and Charizard-GX, drastically swinging the Prize trade when that deck inevitably runs out of single-Prize attackers. Ninetales is the reason why ReshiZard even has a chance, and that’s only because it can disrupt Quagsire’s set up. I personally don’t think Ninetales is that big of a deal, as they are taking one Prize per turn regardless. Quagsire is fine as long as the deck draws decently. The matchup is definitely favored for Quagsire.

One of the neatest things about Quagsire is that it completely obliterates Pidgeotto Control. I’d even go so far as to say that it’s the only deck that can consistently beat Pidgeotto. While I don’t think Pidgeotto, or control in general, will ever be extremely popular at a Regional, having an auto-win against it is certainly nice.

Quagsire is also extremely favored against Blacephalon-GX . Blacephalon’s linear strategy makes it very vulnerable to one-Prize attacking decks like Quagsire, which straight-up wins the Prize trade every time. The same more or less goes for Green’s ReshiZard, which is almost as much of an auto-win as Pidgeotto.

Finally, the Gardevoir and Sylveon-GX  matchup has traditionally been very unfavorable for Quagsire. However, some lists are cutting back on the healing cards, which makes the matchup a bit more reasonable for Quagsire. Just don’t use Keldeo in this matchup, as their four Power Plants renders it useless.

Overall, Quagsire’s matchups are very good. With so many popular decks in the format right now, it would be hard to expect a better matchup spread. Quagsire is also more consistent than people give it credit for. Despite its solid finishes at Atlantic City, it seems to have taken on the bad reputation that Malamar previously had. It doesn’t take bad matchups to any of the extremely popular Tier 1 decks, but it does have some relevant auto-wins. Its matchups against Tier 1 are contentious at worst and very favorable at best, again depending on the specific list a given opponent is running.