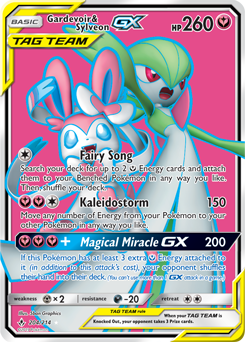 The title of this article is from the French expression “voir la vie en rose” that translates to “looking at the bright side of life” but literally translates to “seeing life in pink”. Look, I’m running with this theme of using “pink” in the names of articles about Gardevoir and Sylveon-GX. Plus, people have told me they were trying to learn French using my YouTube channel, so I’m trying to be educational!

You might be thinking, “So you already wrote about this deck twice and you have another take on it?”. Well, yes. Gardevoir & Sylveon-GX is my pet deck right now. I’ve been liking it since it came out, but despite my initial impressions, it never did very well pre-rotation. In the UPR-on format, though, we’ve seen the deck find a lot more success, including winning the first Regionals of the season, in Sheffield. Although I wrote about this deck not too long ago, I want to explain what has changed since then, and why I’m considering running the deck for Cologne Regionals.

That’s not all, though. Although we still have a bit of time before Expanded Regionals, many of you are already preparing for the format. Many local events are also being ran in the Expanded format, and I’ve even heard of some in areas that traditionally don’t play Expanded, such as Latin America. It turns out that Gardevoir & Sylveon-GX is also a competitive deck in Expanded, although the list is very different from Standard. I’ll use this article to talk about this version of the deck and how it works. Since Gardeon wasn’t in the format at the last major Expanded event, players will not be testing it as much as they’ll be testing the usual suspects of Expanded (such as Archie ‘s Blastoise and Zoroark-GX) or the more hyped contenders (Mewtwo and Mew-GX in its thousand incarnations). That’s why I believe that Gardevoir & Sylveon-GX could take them by surprise.

With that established, let’s get started!

Here is my go-to list. I won a League Cup with it (featuring many of France’s best players) and I think it’s one of the strongest decks in the format right now.

I won’t reiterate what I already wrote about, but I do want to insist on a few points, most of them new compared to my last article.

It’s true that Gardevoir & Sylveon-GX has a bad matchup against both Ability Reshiram and Charizard-GX and Green's Exploration / Reshiram & Charizard-GX. However, the deck has favorable matchups against most of the rest of the meta, including a great Malamar matchup, which is important since Malamar is rapidly growing in popularity. I only play two Great Potion (and no other healing card apart from the wonderful Xerneas-GX) but that’s enough in this matchup (and useless in many others). The key is that you should use Sanctuary GX to take your second Prize. You can take the first one with Kaleidostorm, but Giratina will then deal damage and you can’t trade very well with it, especially with Spell Tag. Even if you heal once with Great Potion, the Malamar player can use Mimikyu to copy Kaleidostorm which is enough to get the KO if you had to take Spell Tag damage. Therefore, if you keep using Kaleidostorm, you’ll probably lose a Gardevoir & Sylveon-GX. If you retreat to another one, Espurr can come and take a KO. However, Sanctuary GX heals you completely (and bypasses Spell Tag), so there’s no risk of any Espurr play. This means that the Malamar player will have to hit into Xerneas. You can then use Aurora Horns for a KO. Even if they keep their Giratina healthy, you can use Custom Catcher to bring up a Malamar or Jirachi and Knock it Out. They will have to 2HKO Xerneas, at which point they still need to take four Prizes (aka two Gardeon) and you only have three left. You can use Kaleidostorm to finish that off. If possible, keep your last two Custom Catcher so they can’t stall a turn with Espeon and Deoxys-GX, but since you can always attach a Fairy Charm P, it shouldn’t be an issue either. If you follow this game plan, you should win a huge majority of the time. Latios-GX can complicate this plan but not enough, usually. You can keep Sanctuary GX to KO it, and if Latios-GX tries to use Clear Vision GX, then you have a window to deal 150 damage with Kaleidostorm. (The last 20 damage can be dealt with Xerneas, even with Overrun if necessary!)

Although I can see the merit in playing two copies of each Fairy Charm as David Ferreira did in his Regionals-winning list, I don’t like it too much. These Fairy Charms are completely dead cards outside of their specific relevant matchups, and playing too many dead cards makes the deck even weaker against Judge and Reset Stamp. One Fairy Charm of each is enough to give you an edge in each matchup anyway. To me, the real stars of the deck are Power Plant and Reset Stamp. Against Blacephalon-GX, for example, two Fairy Charm UB are obviously strong. However, if you stick a Power Plant every time they play down a Stadium (and a Reset Stamp when they take Prizes), they will eventually miss their Stadium and draw dead. The Fairy Charm UB can help you survive, but you win pretty quickly by 2HKOing the first Blacephalon-GX, then dealing 200 to the second one and taking your last two Prizes with a Kaleidostorm on Naganadel-GX.