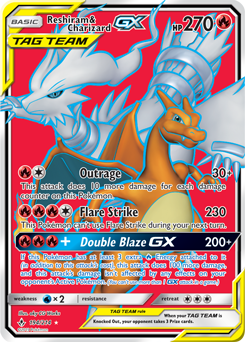 Great Potion is subtly one of the best cards in Unified Minds. Some Reshiram and Charizard-GX decks have played Mixed Herbs before, but the two of those Items together — that’s more healing than many decks can handle! The Green's Exploration version of this deck is the best way to play the deck post-rotation. The idea behind the Jirachi version was based around getting a Kiawe play on the first turn. Kiawe was rotated, so focusing on a slow and steady approach is optimal. Welder is the only way to realistically accelerate Energy to a Reshiram and Charizard-GX with Volcanion as another option using Flare Starter. Playing four Volcanion is the best way to accelerate Energy because you will start with it very often when you’re only playing three other Basic Pokemon.

The idea behind this updated version of the deck revolves around simply using Reshiram and Charizard-GX as the tank it is – 270 HP equipped with strong attacks – and then healing cards to offset any advantage your opponent might have on you. Other than Water-type Pokemon, with a Choice Helmet attached to a Reshiram and Charizard-GX there’s little way your opponent can one-shot you. Outrage also becomes a stronger attack without access to Kiawe and easier ways to use Flare Strike over and over. That said, making use of your most cost-effective attacks like Outrage is a nice bonus touch.

Other than the obvious loss of Kiawe, Reshiram and Charizard-GX / Green’s Exploration builds don’t change much with the rotation. Nest Ball leaves, but Cherish Ball is there to fill the void and working with a more Item-based draw engine can offset the loss. While Pokémon Fan Club isn’t a great card overall, you can tech a single copy alongside a Cherish Ball like I do with my list to still give you two ways to search Pokemon out after targeting the specific Trainer off Green’s Exploration. Green’s Exploration, as slow as it may seem, is a very consistent way to control the cards in your deck and set up slowly but surely. This list does what it wants “nine times out of ten” — it’s very consistent.

This list is simple: use Green’s Exploration to set up. To do this, you should play as many ways to find Green’s Exploration on your first turn as possible. The surrounding cast is filled out with healing tools to keep you attacking turn and turn again, and other techs to balance specific matchups and combat certain situations. When playing this deck I usually opt to play second to get the bonus Fire Energy from Volcanion and Flare Starter. Here’s a deeper look at some of the cards…

This isn’t so much an explanation as to why to play these counts, but more as to why there aren’t any other Pokemon. You want to start with Volcanion as often as you can, so playing four and a limited number of other attackers alongside it only makes sense. Three Reshiram and Charizard-GX is so you don’t Prize one and then struggle to heal the final one in a pinch and sputter out. Without Guzma in the format most decks have to save Custom Catcher to finish TAG TEAM Pokemon-GX Knock Outs, which is hard when getting hit with Reset Stamp, so switching between Reshiram and Charizard-GX to avoid Knock Outs is another viable Prize denial strategy. There are very few options for Pokemon without Abilities that could even be considered in this deck in the first place, one of the few that comes to mind is Eevee and Snorlax-GX. So why not? Without Zoroark-GX in the format it loses a ton of its value. I think skipping it is best because Reshiram and Charizard-GX is the better attacker overall and does more damage, plain and simple. Any attackers with Abilities should not even be considered for this deck in the slightest.

One Pokemon Fan Club and One Cherish Ball