Take a look at this list of some of the best decks of the post-rotation format: Pikachu and Zekrom-GX, Weavile-GX with Darkrai and Umbreon-GX and Mega Sableye and Tyranitar-GX, Malamar  with Ultra Necrozma-GX or Garchomp and Giratina-GX, Blacephalon-GX / Naganadel-GX, Reshiram and Charizard-GX… Notice anything? All these decks use, mainly or exclusively, GX attackers. At least for the time being, it seems that the metagame will be saturated with these big, Basic Pokemon.

There are several reasons for that. First, it became harder to search for Pokemon when some of our best consistency cards, such as Ultra Ball and Nest Ball, rotated. If you’re limited in the number of Pokemon you can search, then it’s better if your deck only relies on a small number of Pokemon to work. This favors Basic Pokemon over Evolutions since you need several Pokemon to get an evolved Pokemon into play, but it also favors Pokemon-GX, and especially Tag Teams; not only can they be searched with Cherish Ball, but they also require fewer resources to be searched out in the first place. On average, a Pokemon-GX will trade for two non-GX Pokemon since it gives twice the amount of Prizes; however, the non-GX Pokemon require more resources, since you need two of them, which may mean you need to expend two cards to search for them.

A related, but separate, issue is that they take up more space in the deck. Evolutions take more space, and playing a 4-4 line of your main attacker gets you six less free spots than playing two copies of a Tag Team Pokemon; this is why Evolutions need to be designed to be very powerful so they can compete with big Basics. This doesn’t matter as much for Basic Pokemon, but it ends up mattering a lot in the post-rotation format due to the loss of Rescue Stretcher. If you only play four copies of a non-GX Pokemon, once they’re Knocked Out, you don’t have any left. If you don’t have any attackers left, your opponent has won. So how do build your deck so that your opponent doesn’t only need to take four Prizes to win?

Lure Ball isn’t bad, but it doesn’t recover Basic Pokemon, so this doesn’t solve the issue. This leaves us with two solutions: The first is to play the only recovery card we have that can recover both Basic and Evolution Pokemon: Brock's Grit. The issue is that it’s a Supporter, and you can rarely afford a turn to play it, if you can even draw it in the first place. This makes it a weak option. The second option is to have secondary attackers. Think about Zapdos / Ultra Beasts: the deck didn’t need to play four Zapdos because it had cards like Buzzwole, Nihilego and Tapu Koko-GX to use in its place. In this format, having secondary attackers is not easy, because, once again, we don’t have easy ways to search for them. 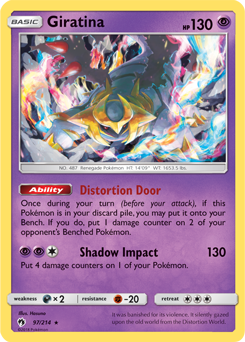 Giratina is an exception to everything I’ve said above because of Distortion Door. Forget about the two damage counters: they’re nothing compared to the fact that this is an attacker that can come back from the discard over and over. You only need to search it once, and then you have, effectively, an infinite number of your main attacker in your hand. You only need to play one in your deck, or two if you want to avoid prizing issues, and you can attack with it for the duration of the game. No Rescue Stretcher is needed. This sets Giratina light-years apart from the rest of the non-GX attackers. Plus, its damage is extremely relevant in this format. 130 damage deals with most non-GX attackers, and can 2HKO most Tag Team Pokemon (with help from Distortion Door and Spell Tag) which, as we’ve already discussed, are the most prominent attacking Pokemon in the format. Giratina trades favorably with Pikachu & Zekrom-GX and Reshiram & Charizard-GX, and that’s without taking into account that its partners, Ultra Necrozma-GX and Garchomp & Giratina-GX, can also threaten OHKOs.

To me, Giratina is the Pokemon that most defines the format. If the meta was only big Basic Pokemon-GX, then there would be ways to counter them. For example, you could try building a deck around Dragonite-GX that can OHKO them with its huge damage and withstand an attack in return. Or you could play Keldeo-GX and be immune to all of their attackers. Maybe these strategies will turn out better than I’m making them sound, but anyone who wants to try them will have to deal with one issue: how do they beat Giratina? Giratina laughs at Keldeo-GX’s Ability, and Dragonite-GX’s Sky Judgment is completely inefficient against a 130 HP attacker: it will run out of Energy before it can win the game.

Now that we’ve established Giratina’s central place in the format, here’s an important question to understand the Worlds metagame: is it really the only non-GX attacker that can compete, or is there hope for other ones as well? In this article, I want to find out what non-GX decks can be successfully played in this format.