Hello! It’s been nice taking a short break from playing Pokemon, but now I’m back to doing a lot of Pokemon: playtesting for Worlds, coaching and, as you can see, writing. So let’s start by making a quick assessment of the meta as we know it so far.

From what I figure, the two decks to beat are Malamar variants and Pikachu and Zekrom-GX. If you’re playing in Day 1 of Worlds, or in the Open, you should definitely be prepared for both of these decks as you’ll most likely face them quite a bit. Obviously, there’s still time for new decks to be figured out, and I’m certain we’ll see some cool surprises, but as we stand right now, these are the frontrunners. Whenever I want to test a new deck idea, I first try to see how it fares against Malamar and PikaRom. If it doesn’t work against them, I either tweak the list or scrap the idea altogether: I don’t think a deck that loses to both of these is worth playing at the moment. I’ll explain a bit more below why these decks play such an important role (and also give my current lists for them!).

If you were hoping that the rotation would shake things up and bring up new ideas, you might be disappointed that these two top decks are just good decks from the 2019 season, but with less good cards in them. I know I certainly am: I find Malamar and PikaRom to be pretty boring and I hope we’re not going to be stuck with them for the whole 2020 season. That’s why I also want to talk about my favorite card from Unified Minds: Naganadel-GX. Its Ultra Conversion Ability is reminiscent of Zoroark-GX‘s Trade and, although it has more limitations, I’m pretty sure this card will see play at some point — most likely as soon as Worlds, but maybe only later in the format. I’ll share my thoughts on how to build a deck around this card, even though it’s still a work in progress.

What do Malamar and PikaRom have in common? For one, they’re both established archetypes. Even if the rotation changes the way these decks are built, if you’ve played them before, you still know how they work. Sure, Malamar has fewer Items to find Inkay and Malamar in the early game (but without Guzma, they’re not in nearly as much danger as before) and PikaRom struggles to get Tapu Koko Prism Star early (but gets Stadium Nav in exchange, to search for Thunder Mountain Prism Star), but generally, they don’t feel very different to play. In addition, both these archetypes are relatively easy to play. As usual, me saying this doesn’t mean that there aren’t subtleties to these decks, or that any player can pick them and do well. It just means that, on average, they don’t have as many in-game decisions as some other decks. For both these reasons, these decks are being heavily tested by players of all skill and experience levels, and they’re likely to be played at least in the earliest parts of the season, before the metagame settles down.

What’s more, both these decks have ways to survive the rotation that other decks may lack. The biggest changes between the 2019 and 2020 formats are the disparition of some very common Pokemon-searching Item cards (Ultra Ball and Nest Ball), and the lack of a reliable Gust effect (a role formerly held by Guzma). Thanks to Mysterious Treasure and Electromagnetic Radar respectively, Malamar and PikaRom don’t suffer from the first change as much as some other decks. (As an extreme case, some archetypes, like Quagsire / Naganadel, are now basically unplayable because there’s no way to search for their key Pokemon.)

As for the lack of Guzma, many decks are trying to fix it by playing Custom Catcher. It doesn’t fit in every deck, but Pikachu & Zekrom-GX can use it pretty well, thanks to a combination of Jirachi and Volkner that lets it search for Items. Among decks that don’t have draw or search engines good enough to assemble two copies of Custom Catcher, the best are those that can either attack the Bench (so they can still target the desired Pokemon) or OHKO their opponents (so that damaged Pokemon can’t go hide on the Bench). For this reason, Ultra Necrozma-GX is currently my favorite variant of Malamar, thanks to its OHKO potential, even on the tankiest of targets. Sky-Scorching Light GX also lets it take KOs on the Bench against some decks. It should also be mentioned that in a format without Rescue Stretcher, Giratina‘s Distortion Door gets even better. Other decks may sometimes struggle to find their attackers, but Malamar has an infinitely recurring attacker at its disposal, that can 2HKO some strong Pokemon.

Let’s take a look at lists for these decks:

I’m a strong believer that in this format, Jirachi should either be played as a 4-of, or not at all. The only way to search for it is Pokémon Communication, and you generally don’t want to spend one for a Jirachi since you have more important targets. Plus, unlike in the past format where you could often use a Nest Ball to search for Jirachi and have decent odds that Stellar Wish would then give you another Item to search for Inkay, giving you immediate profits for Jirachi, the odds of finding a Mysterious Treasure or another Pokemon Communication are now pretty low, so it’s not worth getting Jirachi instead of Inkay or Malamar, unless you need to find a Supporter (and your Dedenne-GX is unavailable).

This means that if you want to use Jirachi — and it makes sense, especially in a deck like Malamar / Ultra Necrozma-GX where you’re going to often use Switch to get an attacker back to the Bench — you want to maximise your odds of starting with it. Even if you don’t start with it, with four Jirachi in your deck, it’s likely that you’ll find one early off a draw Supporter or an Acro Bike. Additional Jirachi can be discarded or put back in the deck for Pokemon Communication. 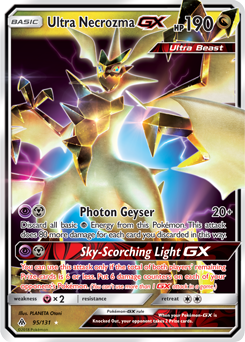 You could make a case that you should play 3 since there’s no Rescue Stretcher to get it back (or Marshadow-GX to act as a third copy). However, most of the time, we’re attacking with Giratina, with Ultra Necrozma-GX acting more as a late game attacker, so it’s not really needed. If you find yourself attacking with Ultra Necrozma-GX more than expected, though, definitely consider the third copy.

With Pikachu & Zekrom-GX’s popularity, Mew is a good idea to include. It can easily be searched, and having more Pokemon is always good if you want to play more Pokemon Communication.

This could be any number of secondary attackers. I like Dawn Wings Necrozma-GX because its GX attack gets much stronger in a format without Guzma or Escape Rope, and it works great against Blacephalon-GX since it can OHKO it.