In case you did not hear the news, rotation occurs prior to Worlds this year. The combination of rotation and the Unified Minds set results in the biggest quarterly format shift to in recent memory. I personally like this change a lot. I’d much rather play in a fresh format than a stale one. It forces players to both build new decks and learn how to play those decks into a new array of win and lose conditions. But enough gushing, let’s talk about the Worlds format! It’s definitely too early to pin down any “best deck”, so today’s article leads with a few abstract tips, followed a big section on early archetypes and decklists. Consider it a primer for Worlds, something to get your mind in the right head-space.

Now, I could write a long article discussing all the cards that enter and leave the format, but I already saw a few content creators cover that, so let’s dig into something meatier. Instead, I would like to assume that you already know the cards in our next format. If you do not, I recommend you take some time reviewing that before moving on ahead. Which brings me to my first tip:

Your playtesting group can save yourselves days of meta discussion and effort if everyone just memorizes the format in advance. I know, I know, the new set contains 200 some new cards. But most of you probably know ~10+ Pokemon sets by heart already, spending some time learning one more cannot hurt. Or at the very least, get this conversation out of the way early. Any time you spend testing before fully exploring the set could easily end up wasted.

All of us had favorite decks before rotation. We would love for that deck to succeed after rotation. It would be so convenient if they did. We could save money on expensive new cards. We could save so much time and effort on testing. But in my experience, that kind of sentiment creates a trap that leaves you with tunnel vision. Learning a new archetype always pays off better than refining old favorites, because even if you do not like the deck, learning the new archetypes still helps inform you on how to play against them optimally.

Everyone likes playing with new techs, and the new set certainly introduces a lot of them. Everybody loves their “I win buttons”. But high consistency lists tend to perform better at the start of new quarters, so you should try to resist that particular temptation. When testing the upcoming format, always start building your lists with literally 0 tech cards and maximum consistency. From there, you can start considering tech cards. But always remember the following rule: 1 deck slot = 1 win Day 1. If a single slot tech card wins you a single best of three match in Day 1, then that tech card only broke even for you. If it wins you two best of three matches, then you can argue you earned a profit on that deck slot.

No defined meta exists for Worlds yet. So until people start discussing the format more, I would avoid searching for a “Best Pick”. Instead, I would try to eliminate “Suboptimal Picks” from my roster. Because even without a clearly defined meta, you can still determine which decks lack too much consistency or whose win conditions feel too weak.

A Few Archetypes in Depth

Hopefully those brief tips got you in the right mindset for deck building and deck discussion. Because the rest of the article discusses nothing but that. I do not have time to cover everything in depth, so let’s focus on three lists in detail before running through a few others briefly.

Before rotation, Shedinja could never really close out games fast enough. If your opponent wanted to stall out the game, they could hold cards back, play Cynthia when your deck ran out, and reasonably expect to tie a BO3 that way. But with the introduction of Jessie and James, Shedinja can finally win games on a reasonable clock. Guzma rotated as well, so Shedinja can achieve its victory state much more readily.

On the other hand, this puts a big target on Shedinja’s back. With Wall Stall losing healing cards and Weezing losing both Counter Energy and Double Colorless Energy, Shedinja becomes one of the only “annoying” decks left in the field. This means every other deck in the format can focus their attention on Shedinja, rather than a number of otherwise annoying archetypes. 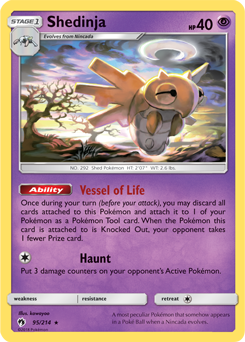 For now I can offer the list above as a “core” build utilizing Professor Elm's Lecture. I also saw a few people throwing around lists utilizing Dedenne-GX and Giovanni's Exile. I may experiment with those in the future, but the Elm’s build served me well so far in testing. I personally dislike the idea that such an engine would get punished by Giratina and Shrine of Punishment while not actually returning that much draw power per Supporter unless you hit two Dedenne-GX with an Exile.

As stated in the earlier tips, I want to start testing new formats with maximum consistency, which means I excluded a lot of control Tools. I cut Custom Catcher early on. It offers a powerful win condition, but it takes a lot of deck slots. You usually need a minimum of 3 just to deal with prizing issues. Furthermore, it takes up 2 cards from resource management in the late game, placing a significant strain on your late game resources. If I wanted to punish decks with minimal switching options, I would probably run a Koga's Trap instead. I also excluded Lusamine and Stadiums such as Sky Pillar and Power Plant. Shedinja may need these cards for specific matchups, but as stated earlier, I simply want to build my first iteration lists with maximum consistency and minimal techs. The deck’s core strategy revolves around looping Jessie and James plus Crushing Hammer until you win, so let’s just max out all cards that help us get there.

You may also note the inclusion of Marshadow and Weezing from Unified Minds. Unlike a counter Stadium, I can use a Marshadow through Brock's Grit rather than Lusamine, providing me more value out of my limited Supporters per turn. Weezing synergizes with Jessie and James and provides me an extra useful target for Brock’s Grit in late game scenarios where I only wanted 4 specific cards back and have to shuffle 2 more filler cards.

Update 6/27/19: Pokemon recently confirmed that Jessie and James will not become legal until after Worlds. I would probably not advise playing Shedinja anymore as a result. Jessie and James offered both a strong control option and a way to speed up your games. At the very least, I believe you need something similar to win on a clock. Perhaps you could run a line of Memory Melt Slowking for example. However, Shedinja suffers from deck space issues now that Gladion rotated, so I do not feel optimistic about Stage 1 techs such as Slowking.

What Did Shedinja Gain?

Shedinja primarily benefits from two changes: Guzma and Field Blower rotated, making it easier for Shedinja to establish its lock. And Jessie and James got introduced, helping Shedinja strengthen its lock and win on a clock. The introduction of Recycle Energy and the new Weezing also help, but most of the list consists of pre-rotation cards. One could also argue that Hapu helps the deck set up, but it feels like a marginal improvement over Cynthia at best.

What Did Shedinja Lose?

Both Gladion and Rotom Dex rotated out of the format. So unless you can justify running a Celesteela-GX, you should expect to never access your Prizes. It also lost a few consistency cards such as Nest Ball and Ultra Ball, but in my experience the deck still sets up well enough to threaten the format.

At the start of the format, I just want to find decks that can threaten strong win conditions consistently, regardless of whether other decks or techs could hypothetically counter them. Shedinja definitely makes the cut in this regard. Which in turn begs the question: how can we counter Shedinja?