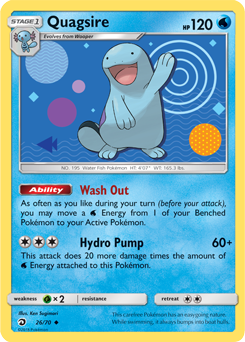 A deck that has been around nearly all season has been Naganadel / Quagsire. It has been popularized at times by Ross Cawthon, then discredited, only to pop up again in the hands of Cawthon once more. Recently, at California Regionals, the deck saw its most successful run ever in the hands of four different players (not attending, Cawthon was not one of them.) Let’s skim over a complete history of the deck; it’s placed eight times:

The deck lacks a Top Eight right now. Why? Some would say it’s a weaker, worse deck than most out there. I would typically agree, or rather, I would have, but the release of Reshiram and Charizard-GX into the metagame has changed my opinion significantly. So where does the deck really stand? It’s kind of a dark horse; somewhere in the middle of being a Tier 1 deck and just barely surfacing from the bottom of the barrel. It’s a deck that performs fairly well most games if it sets up, which you can do with an optimized list; and it benefits from type-advantage against one of the best decks in the Standard format. It’s also a fun and simple deck that’s great for beginners or someone just trying to get started in the game. It offers a linear strategy with wiggle room to pull off more intricate plays if you so choose.

Its best thing going for it right now is the type-advantage against most Fire-type Pokemon; there is no better mono Water-type deck for the job. A card like Magikarp and Wailord-GX can be oppressively strong in Expanded when given the opportunity to Towering Splash GX and wipe their Bench, and this is the only deck in the Standard format that can successfully complete the same play. This unique deck varies slightly list to list, but I prefer a straightforward version with no frills for maximum consistency. The release of Pokégear 3.0 makes the deck more consistent, a nice touch. Here’s my list: