Hello everyone! This is Grant Manley once again. I am writing this the day before Brazil Internationals begins. Although I am not attending the event, I am incredibly excited to see what kind of meta will reveal itself with the release of Lost Thunder. I’ve been working on a few decks myself, though I don’t have anything too crazy at the moment. I was originally expecting Alolan Exeggutor to be broken after Lost Thunder dropped because it gained all kinds of cards that can support it. After some testing, however, I was proven wrong. Alolan Exeggutor sure has a lot of HP, but the deck is mediocre at best due to its low damage ceiling. Additionally, Exeggcute suffers against spread decks such as those using Decidueye-GX, either of the two Alolan Ninetales-GX, Spell Tag, Tapu Koko, and others.

My focus shifted to other non-GX decks that showed promise. I haven’t gotten around to refining a Lost March list yet. I think that Lost March shows incredible potential, but it seems extremely weak against aforementioned spread decks. Lysandre Labs does not help it all that much. The first deck I’ll be talking about today is Granbull. I was expecting Granbull to be a useless bulk rare from the set, and I was so very wrong about that. Caleb Gedemer actually just posted an article on Granbull as well. I am very curious to see how popular Granbull ends up being. The second deck that I will talk about is White Kyurem. White Kyurem is another card that I wasn’t expecting to be so great. After exploring it some more, it feels almost like a different flavor of Granbull.

This deck is hilarious on so many levels. It doesn’t play any draw Supporters! In case you are unaware, Granbull‘s attack, All Out, does 160 base damage if you have zero cards in hand. It only costs one Fairy Energy. Every card in this list is dedicated to thinning your hand down to zero every single turn while replacing whichever Pokemon gets Knocked Out. This list is able to accomplish this with incredible consistency. Even playing solitaire with an Active Granbull being KO’d every turn, I am usually able to stream at least six Granbull per game, all while replacing Snubbull and hitting for max damage every turn. Of course, sometimes Magcargo will be KO’d. Usually, this is actually better than Granbull getting KO’d since it is easier to recover from the occasional Magcargo KO than from continuous Granbull KO’s. 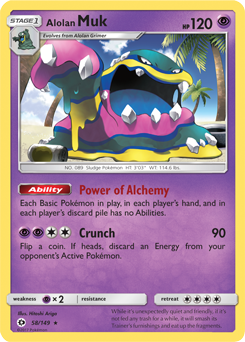 In my opinion, Granbull is the most ridiculous deck in the current format. It is a semi-bulky one Prize attacker that OHKOs nearly every Pokemon in the game, all while only using one Energy. It is favored in every matchup besides arguably decks with Alolan Muk. If you see an opposing Ditto Prism Star, try to use Guzma to KO it with All Out or even with Snubbull‘s Make a Mess. Granbull’s primary weakness is clunky early-game hands. Sometimes you will open with two Rescue Stretcher, a Diantha, and no Ultra Ball; and it makes you question life. Once you get rolling, the deck runs itself and is nearly unstoppable but there is a bit of a learning curve. The deck takes some practice and getting used to. There are lots of awkward decisions to be made. Nine times out of 10, if you whiff an All Out turn, it is your own fault. My list isn’t crazy by any means, but I do want to briefly touch on some of the more unique decisions.

Oranguru is this deck’s only form of draw power, and you want two in play at all times. Running two is too low in case of one being in the Prizes. If your opponent catches you with only one Oranguru out, they can KO it and leave you stuck with no way to draw more cards. I actually prioritize the second Oranguru over the second Slugma, though sometimes that is because I have Ditto in play.

Diantha is amazing for this deck after a Granbull gets KO’d. However, it is a massive liability whenever Granbull has not been KO’d. It is useless in the early game, and just has to be discarded. It is also a liability mid game if Magcargo gets targeted. While Diantha is great to have in specific scenarios, I would not run more than two due to it possibly being a dead card at crucial points in the game.