We all know of Tapu Bulu-GX / Vikavolt, a deck that kicked off last season as a rogue, but grew into an obnoxious meme that was notorious for ending tournament runs.

Vikavolt is undoubtedly a powerful card, running extra Energy into play each turn with no drawback other than having to get a Stage 2 into play. Tempest GX changes this for Rayquaza-GX / Vikavolt, giving a Stage 2 deck insane draw power as early as the first turn when playing second. I can say that nine times out of ten, a Tempest GX will net you a Vikavolt in play on your next turn — it’s so many cards! We know Rayquaza-GX, the poster child for Celestial Storm, turned in three Top 8 finishes at the World Championship just under a month ago. Can Rayquaza-GX be made to be even stronger?

We can rebuild him. We have the technology. We can make him better than he was… 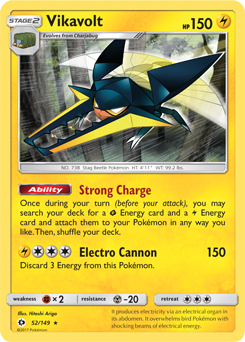 I focused on building this list with consistency in mind, optimizing the turn two Vikavolt as often as possible. Once you achieve the setup you desire, there is no stopping you. Strong Charge builds on itself, so more and more Energy gets flooded out, powering even stronger attacks. I am infatuated with this deck because once it gets rolling, it does not stop.

Your main attacker and preferred starter. Your counts of Rayquaza-GX should be maxed out. Starting the game with it gives you immediate access to Tempest GX with a Grass Energy in hand and a big Dragon Break attack right after. Early on, your other Rayquaza-GX can serve as the last bit of oomph you need to achieve a one-hit Knock Out by accelerating even more Energy into play.

Skipping Charjabug , we run right up to Vikavolt, the centerpiece and the fuel this deck siphons. Using Rare Candy  to cement itself in play, three is a fine number. Along with three Grubbin, you give yourself the option of getting multiple Vikavolt into play and defend yourself against the occasional bad set of Prizes. This deck can function without Vikavolt, but in a perfect world, you’ll get two into play. With two down, the sky is truly the limit and you should have enough gas to beat most of the meta.

This is the minimum count of Grubbin you should play in this deck. Four is a double-edged sword in that you get it into play on your first turn more often, but you also start with it in the Active more often. This is good and bad, but I feel that the bad outweighs the good, since you still have plenty of other ways to get multiple Grubbin into play on your first turn.

While starting with Tapu Lele-GX stinks for this deck, multiple ways to get Volkner are welcomed. Additionally, Guzma becomes your main priority after setting up and getting plenty of Energy in play, so multiple Tapu Lele-GX will assist you in finishing the game. One can occasionally get caught in the crossfire of Stormy Winds, so it’s important to play two copies.