I wish the Ability of Rayquaza-GX, Stormy Winds, was still called Storm and Stress, then my title would still be accurate. Stormy Winds reads: “When you play this Pokemon from your hand onto your Bench during your turn, you may discard the top three cards of your deck. Then, attach a basic Energy card from your discard pile to this Pokemon.” Dragon Break does 30 damage times the amount of Basic Grass and Lightning Energy in play. You probably see where this is going, Rayquaza-GX is an insane card, one that can pop off some big damage very quickly. Tempest GX is just icing on the cake to complete a solid card that even has some built-in draw power if you hit a wall. This deck is simple, play Max Elixir and maxed out copies of Mysterious Treasure and Ultra Ball to find Rayquaza-GX quickly and do a ton of damage.

Now enter Latias Prism Star. 130 HP is enough to take a hit or two and Dreamy Mist while not very powerful damage-wise, can really get you back into games where you fizzle out by putting a Basic Energy from your discard pile to each of your Basic Benched Dragon Pokemon. These two cards singlehandedly compile this new archetype, one that’s already been incredibly successful in Japan, which can often be a nice indication for our Worlds format, or formats to come. Historically speaking, decks like this have been successful before. Darkrai-EX with Dark Pulse had its time in the sun and Xerneas BREAK has had a few good runs, too. Dumping Energy on the board in order to do more damage is no new strategy, and Rayquaza-GX is going to be able to capitalize on that better than anything before in my opinion. A built-in Energy accelerator is sweet, especially when it thins your deck by discarding cards, too.

Rayquaza-GX decks can take many forms, and it will be interesting to see which one pans out to be the best. Right now I favor a list with Garbodor so you can both shut your opponent down and beat him or her down too with powerful attacks. Also tossed around are the idea of playing Ultra Beast Pokemon like Pheromosa-GX and / or Xurkitree-GX. If you play them, you can Beast Ring Basic Energy out of your deck and bolster the power of Dragon Break. This deck is going to be very popular at the World Championship and beyond, so let’s take a look at it…

Rayquaza-GX is its own Energy acceleration, you’ll want four in every version of the deck to ensure that you get multiple Stormy Winds Abilities popped off. Every time you hit one that’s another 30 damage buff for Dragon Break, and again, using these guys as many times as you can in a game can only help you. 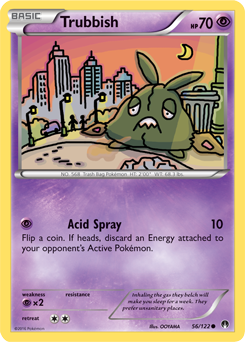 You can’t go lower than this on this count since you always run the risk of discarding pieces of your Garbodor line with Stormy Winds. At a minimum in most decks that play Garbodor you’re going to want at least two Trubbish. This is the perfect count for this deck, and it doesn’t matter which Trubbish you play, really, although I would play Acid Spray for the random time that your opponent uses something like Zoroark-GX to Trickster GX Stomp Off and run you out of cards… that probably won’t happen, though. I suppose the logic applies there just as much to Acid Spray, so just have at it, pick one that’s cute or something, it’s your call.

To the same tune as the Trubbish count, two Garbodor will bail you out in times of need where you discard one randomly or land one in your Prizes. In either scenario you will want an additional copy so here you have it, two Garbodor.

A single Tapu Lele-GX is usually fine for this deck. You don’t set up Garbodor every game, so you will have access to it occasionally in the later game. You do have two Rescue Stretcher to pull it back and reuse the Ability if it gets Knocked Out or discarded, so I’ve found one to be fine. The very small downside to taking a Tapu Lele-GX out of the deck, or a Basic in general, is that you have a slightly higher chance of starting with Rayquaza-GX. Since it’s the centerpiece of this deck, you’re going to want to be able to use it as many times as possible without having the misfortune of starting with it and being unable to use it at all. I primarily use Tapu Lele-GX in this deck to fetch Lillie on the first turn to get an even bigger pop off with lots of Energy acceleration. I haven’t found the need to use it more than one most games, and your Bench space can be tight with so many Rayquaza-GX, and Garbodor, too.

The backup attacker for this deck, Latias Prism Star can get you back into a game you fall out of very quickly. By accelerating Energy to your Rayquaza-GX on your Bench (unless you play any other Basic Dragon Pokemon), you can kick up your Dragon Break attacks once more to the range you want to be hitting for: one-hit Knock Outs. While Dreamy Mist only does 30, that math can be relevant if you need to soften up something before finishing it off. Rayquaza-GX can only do so much on its own with its Ability and Max Elixir hits varying so much, Latias Prism Star is great insurance. As a side note, when you have two search cards in hand (Mysterious Treasure, Ultra Ball), it is correct to get the Latias Prism Star out of your deck before getting a Rayquaza-GX and using it, just so you don’t accidentally discard the Latias Prism Star in the process, that loss can be brutal.