PokeBeach’s May 2018 PTCGO Tournament is over and the winners have been crowned!

This month’s tournament was Pengwon by Pengwin! He will be shipped two booster boxes because he was a premium subscriber, courtesy of TCGplayer.com!

My name is Olen Hulsebus and I live in Chugiak, Alaska.

I’ve won both of the League Cups that I’ve attended up here, and have made it to Top 8 in three out of the four PokeBeach tournaments I’ve competed in. I would love to go to some Regionals, but being from Alaska traveling is very expensive.

I’m a very competitive person and like to play as many tournaments as possible for any game. 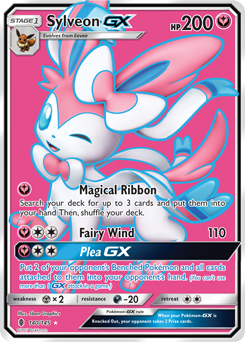 Why did you play stall? Were you considering any other decks?

I believe that pre-Forbidden Light, Sylveon-GX is one of the strongest decks in the game. I think because of its strange play style and how the community kind of frowns upon stall decks, people stay away from it when it’s actually really strong. If I didn’t play Sylveon I would’ve played Zoroark-GX.

Your list seems pretty straightforward. Did you not feel the need to run techs like Hoopa or Gardevoir-GX?

After all my games in previous PokeBeach tournaments I only used Gardevoir-GX once, I found that a lot of the match ups that Gardevoir was supposed to be very helpful in, it wasn’t needed, and I could get by with just attacking with Sylveon instead. I really don’t like Hoopa in Sylveon, it’s a card that causes more trouble than it solves. It can put you into very awkward situations and isn’t as helpful as many may think.

My games against uncleyuri, he mopped me up 2-0 with Zoroark / Lucario-GX (which is a very favorable match up for Sylveon). He played the games perfectly and is one of the best Zoroark players I have ever played against.

I would remove one Delinquent and add one Fairy Energy in its place, but for Sylveon to work in the Forbidden Light meta the deck would need an entire revamp, the new Ultra Necrozma-GX / Malamar decks are just too hard.

Sylveon is one of the decks hit hardest by the rotation, losing several key cards. Do you think it can ever recover? Does it have a home in Expanded?

Post rotation Sylveon doesn’t look like it has a bright future for a while with all the Malamars running around, Sylveon thrives in metas where there’s a lot of Special Energy or minimal Energy acceleration. Going into post rotation Sylveon has enough base tools to make it work, but the deck is all about slowing your opponent down and stealing tempo from them, not so much as milling them. So if the meta’s right it can do well in the future. As for Expanded, 1-2 Sylveons keep popping up into Top 32 every Regionals, so once again it’s more about what other people are playing, but most of its match ups are favorable.

Olen, Greg, Kazuki, Adrian, and Anselm will all be seeing a huge increase in prizes because they are premium subscribers. You can see how many packs each of them earned at the top of this page. The deck lists of second, third, and fourth place can be seen below:

June’s tournament is currently underway. Each tournament awards up to 7 booster boxes of product to top finishers plus promo products and additional booster packs to premium members. The prizes for premium members are bigger than ever before, so don’t miss your chance to play in the next tournament! Signups for July are currently scheduled to be posted Thursday, June 28th. Mark your calendars!