Garbotoxin and Trashalanche are insanely powerful in todays Standard format. Field Blower counts are down and Ability-lock is incredibly debilitating for most decks. The biggest draw to the Garbodor side of things is the fact that Buzzwole-GX is large and in charge, and weak to Psychic. Acid Spray, with a Choice Band, and Trashalanche are among some of the best attacks to use to one-shot a Buzzwole-GX. Fighting is so prevalent right now that going above and beyond to counter it will almost always be worth it, especially in smaller tournaments like League Cups, making Garbodor something to look at seriously. Let’s take a quick second to refresh about the state of the format:

Chaos has broken loose, giving birth to what will likely be the “final form” of this format. A land scattered with outliers, all trying to get a piece of one of the “big three” decks: Buzzwole-GX, Malamar, and Zoroark-GX. Things like Greninja BREAK have popped up as they can theoretically beat any of the “big three”, depending on draws.

A luck-based rock-paper-scissors format is the best way I can describe the mess we’ve tumbled into. Most decks seem to brick every three games or so, and in doing so it creates some massive frustration for the pilot. Accepting this is the first step to getting a better handle on this format. Choosing the direction that you want to focus your testing efforts is the second step.

There are a few decks that can beat every deck on a good day, Greninja BREAK is one of them, incidentally because of its Ability-locking prowess with Shadow Stitching. The other two decks that I’ll be focusing on today have a pretty good shot at beating anything as well. Garbodor / Buzzwole-GX and Garbodor / Zoroark-GX are those two decks, and I’d bet that wasn’t what you were expecting. I’ll quickly dispel any fantasies you be relishing in regarding other Garbodor decks.

Garbodor / Drampa-GX has been dead for a long time and with the dominance of Buzzwole-GX and it won’t be coming back anytime soon. Garbodor / Espeon-GX is another outlier, but it’s lost its day in the sun due to the release of Beast Ring. which gives a Buzzwole-GX player the chance to simply trade Prizes against a Garbodor / Espeon-GX, and there’s nothing a Garbodor player can really do to get around it. If you lead with a Buzzwole-GX, you can let your opponent knock it out, use Sledgehammer from Buzzwole to get back in the Prize trade, and from there if you pop off a Beast Ring you don’t even have to worry about how many Items you have played, the matchup becomes a wash. Garbodor is made to last the test of time in a long game, using N to secure wins. Clenching the edges of your seat is a recurring theme whilst playing a Garbodor deck, and Garbodor / Espeon-GX is the last one of these “traditional” Garbodor decks to die off. I don’t think we’ll be seeing any success from it anymore.

Enter Garbodor, this time with Zoroark-GX. These two have been paired together in the past, but what sets the deck apart this time? I don’t see this as a Zoroark-GX deck any longer, in fact, I think Garbodor is more important to the build’s structure than anything, so much that I’ve even reduced my count of Zorua to three, a tell-tale sign that something is amuck. Garbodor / Buzzwole-GX received some serious juice with the release of Beast Ring, and oddly enough, Order Pad found a home in the deck too, just giving the pilot more outs to Beast Ring once it’s activated. These two decks are very intriguing right now and worthy of discussion. They can be grindy to play, but when you win the feeling is oh-so-great. Let’s begin! 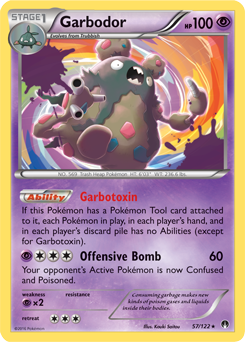 Before I say anything, this list is based off Wesley Hollenberg’s original list from Wisconsin Regionals, with changes from Azul Garcia-Griego. This deck is really simple and very strong. It focuses on playing an Item-based engine to speed things up and get the best value out of Beast Ring once its effect is activated. This deck brings the best of both worlds together: combining the best attacker in the game and Ability-lock, which has been something that’s been noticeably missing from competitive play for a while now. While Ability-lock has still been around, Garbodor has been missing from Top Eight cuts for a long time. Garbodor / Buzzwole-GX finally popped up again at Wisconsin Regionals, taking a Top Four placing and narrowly bubbling out of Top Eight in the hands of another player. This deck has some serious potential and it’s one of my favorite decks right now.

The strategy is very straightforward: start with a Buzzwole-GX, give up two Prizes, and then go off with Beast Ring. Order Pad gives you additional ways to get Beast Ring out aside from Supporters themselves, and from there you can build up multiple Buzzwole-GX to attack with and you should crush your opponent as long as he or she doesn’t mirror your start. Once you have multiple attackers built you no longer have as much of a need for the likes of heavy draw Supporters; and you are free to play N as much as you like, hopefully debilitating your opponent to the point where you can get ahead by a significant margin.

Garbotoxin and N have been a winning combination for some time now, and while this deck lacks Trashalanche options, you make up for that with some of the most powerful attacks in the game that will almost always one-shot the opponent. Fighting Fury Belt gets the call in this list as opposed to Choice Band, giving you more HP which is especially important in games against the traditional Buzzwole-GX / Lycanroc-GX decks. Those lists usually don’t play Field Blower and your extra HP will help you survive big attacks, and Garbotoxin online will also aid in the dismissal of the Abilities of Diancie Prism Star and Regirock-EX, making it even harder for your opponent to take one-hit Knock Outs.