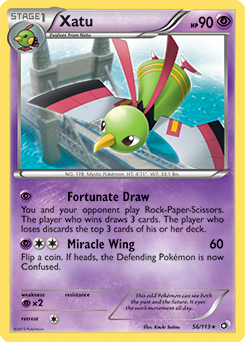 Standard format, with Forbidden Light, is a relatively new format with much still yet to be discovered. Thus far, one thing is discernible: Rock-Paper-Scissors format is back. For some it’s time to gamble, roll the dice, and see what happens. Making a solid choice for any upcoming Standard events is going to be difficult until we see the results of a major Regionals. So many new decks seem to pop up with success each weekend so it can be tempting to settle for less or play a “fun” deck while ignoring what may be better overall and even sitting right in front of your face.

This deck beats Zoroark-GX and all the random nonsense that isn’t Zoroark-GX. The only problem is that Malamar is a horrible matchup for Buzzwole-GX, and it very consistently beats it. Malamar has taken Standard by storm, which pushes it to the back quite a bit. Playing Buzzwole-GX is quite risky right now with the way the format is rapidly changing; I don’t recommend it very highly.

Get yourself a solid deck that does what it wants almost every game and takes very few bad matchups, get yourself a Malamar. I have been recommending this deck to many people in conversation as I think it gives you the most even chances of doing well. It’s not something that’s going to do amazingly well and pop off like Buzzwole-GX, but it’s something that can just slide by into day two. Malamar can certainly still beat Zoroark-GX decks, although it’s much more difficult than Buzzwole-GX decks.

Trading isn’t dead yet, but Buzzwole-GX presents a very challenging situation, posing questions that are hard to answer going into an event. While playing Zoroark-GX, you need to reliably make it past the first couple rounds to avoid Buzzwole-GX as Malamar should weed those decks out. Buzzwole-GX is still a winnable matchup, especially with the proper techs. Playing a lot of Zoroark-GX myself over time, I’ve found that a Mew-EX alongside two Mewtwo is the best way to go into it these days. Eneporter is a cute tech to boost the damage output of Mewtwo, food for thought.

Coping in a Luck-Based Format

A common theme recurs for me in this format: luck-based elements often decide the game. It’s very easy to develop a frustrated, pessimistic outlook in times like this. Many of us are deep in a chase for Championship Points this late in the season, so it’s important not to lose focus. Remember, at the end of the day, the game still awards the better player on average, control what you can control and do your best. If you don’t find playing Pokemon fun, well, then maybe there are greener things on the horizon for you. A goal is a goal, no matter how irritating it can be to achieve sometimes. Do your best and get after it, luck may decide your fate, but don’t let it decide your mentality.

What Do I pick?

I like to lump the three top decks into categories, Buzzwole-GX being a “high roller”; Malamar being a “safe play”; and Zoroark-GX being a “calculated risk”. I generally gravitate to safe plays, although that is certainly open to change depending on my Championship Point-situation. Need the last few for an invite? Then Malamar is a fantastic play for events I would say; make the best choice for you.

I’m between Malamar and Zoroark-GX right now. I tried Turbo Lapras-GX out at the first Mexican Special Event to awful results; I don’t think it beats Buzzwole-GX consistently. I’ve been meddling with Zoroark-GX, trying to find a winning combination, but nothing has been eye-poppingly strong just yet. Malamar is just a solid deck. It’s boring, “slow”, and just does what it’s supposed to. Max Elixir can speed it up a little bit, and gives you the opportunity to smooth over bad starts when you can’t set up all the Malamar you need to. Anyways, I prefer Zoroark-GX of the two, so I’m focusing on making it work. I won’t be playing Lapras-GX, at least I hope not. I don’t like playing Buzzwole-GX in a field of Malamar, a very poor matchup. Similarly, I just got back from Virginia Regionals where I played Zoroark-GX, a deck with a huge target on its back in a field of Buzzwole-GX, and I did not have a great time, taking two losses to the muscular mosquito itself. In any case, I prefer to be safe rather than going all in with a deck that can be punished by a particularly popular bad matchup.