Hello everyone! Roanoke is right around the corner, ready to give us our first look at Forbidden Light in the Expanded format. Multiple new cards look ripe for play; Beast Ring and Diancie Prism Star will absolutely find a place in the successful Buzzwole-GX and Lucario-GX decks, Mysterious Treasure will improve Trevenant BREAK and Garbodor-based decks, Diantha will add yet another strong Supporter to Gardevoir-GX decks — and that’s just the more obvious impacts. There is of course a notable absence from the named decks above; the go-to Expanded BDIF — Zoroark-GX — seems to have gained little from this new set. Even without any obvious gains, however, Zoroark looks to remain as the strongest deck in a vacuum. After all, it’s very difficult to compete with a deck that can draw seven or more cards, disrupt your hand, lock your Abilities, and then hit you for 210 damage within a single turn, especially given its incredible consistency.

This has become more the case as Zoroark-GX decks continue to be refined, and led to a format in Salt Lake City dominated by Zoroark-GX and decks designed specifically to counter Zoroark-GX. Of the Top 32 decks in that event, seven were Zoroark-GX decks, 14 were either Fighting, Glaceon-GX, Sylveon-GX, or Gardevoir-GX decks, and five were Drampa-GX / Garbodor decks with heavy counts of Parallel City. Of the remaining six decks, all but one (Night March) had a way to disrupt the Zoroark strategy, either by ability disruption (in the case of Greninja and Sableye decks) or item disruption (in the case of Trevenant). Without a doubt, Expanded had very much turned into a format of “beat them or join them” with regards to Zoroark-GX.

With the arrival of Forbidden Light, a second deck seems likely to join Zoroark-GX in that elite Tier-1 category. Buzzwole-GX decks were already doing well as a decent counter to Zoroark decks, but with the new additions from Forbidden Light, Buzzwole has been strengthened enough such that it can compete not just as a strong anti-meta play, but as a major threat to be dealt with. The deck’s aforementioned new additions are strong in Standard, but even stronger in Expanded, where synergy with Expanded-only cards such as Korrina take them to yet another level. Buzzwole-GX decks have yet another advantage in that unlike Zoroark-GX decks, their stategy is much harder to counter. Against the Zoroark decks, you can improve your matchup with copies of Sudowoodo or Parallel City to limit their Bench (and thus their damage output); no such easy techs exist for dealing with Buzzwole-GX. Furthermore, cards such as Landorus-EX allow Fighting-type decks to spread out their Weakness, mitigating simple type-based techs or matchup advantages.

For my last two Expanded events (Dallas and Salt Lake City), I’ve been squarely on the “join them” side of the Zoroark debate, having played that deck to points finishes in both events. While I have a tendency to stay away from decks that are clearly considered the “deck to beat”, in the case of Expanded Zoroark-GX, I find it hard to justify another choice — given the overwhelming power that the deck has when unchecked. Zoroark is strong enough that even decks designed to counter it can still struggle against it, and is versatile enough that you can manage to tech against most of that opposition. I still believe this to be the case even in a metagame that is full of counter decks, even given the newfound strength of Buzzwole-GX decks. In my last article, I emphasized the importance and benefits of sticking with a single deck in many scenarios. For this article, I’ll be taking that advice, and sticking to Zoroark-GX once again. More importantly, I’ll be going through the process I’ve taken to adapt Zoroark into the new Forbidden Light meta, and how or why my list might change from Salt Lake City to Roanoke. In addition to the decklists, I’ll be going over the critical matchups of Zoroark versus Zoroark and Zoroark versus Buzzwole, as well as making a brief meta analysis for heading into Roanoke.

Here is the list that I used in Salt Lake City:

If you’ve read my previous Zoro-article posted prior to the Dallas Regional Championships, you might notice that the list from that article and this list are very, very similar. The Alolan Muk are gone, but many of the tech cards, such as Tapu Koko and Iris remain. Indeed, for Salt Lake City, I went even further with the techs, this time adding in the now-popular Red Card (no longer much of a tech, but rather a standard addition to this deck), as well as my new favorite surprise item, Counter Catcher. Likewise, you’ll also likely notice that multiple “expected” cards are missing from this list… gotta fit those techs in somehow! In particular, this list lacked Field Blower and the popular Ghetsis, as well as several other popular tech cards such as Exeggutor. When going over each of the matchups we might expect in this new format, I’ll use this list as a baseline, while pointing out the strengths and weaknesses of each of our tech cards and thus showing how we might adapt this list into one which can be successful for Roanoke. 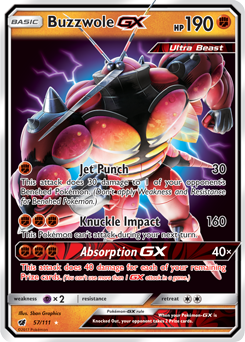 While the Zoroark mirror match will likely be common, the emergence of Buzzwole makes this likely to be the most important matchup worth knowing. At first glance, this matchup might seem miserably bad — Buzzwole is strong enough, even when it isn’t hitting for Weakness — but it ends up being much closer than you might think. One key here is our deck build; our addition of Zoroark gives us a reliable non-GX attacker into Buzzwole-GX, as we can easily copy either Aborption GX (in the early game) or Knuckle Impact to get a OHKO. This also allows us to reliably work around Sudowoodo, since our non-GX Zoroark doesn’t require us to fill our Bench. The general strategy I’ve found the most success with goes something like this:

In the first few turns, get down as many Zorua as possible — and replenish them as quickly as possible. Some will almost certainly be KO’d, so you need to have a few backups.

As with pretty much any matchup, you’re going to want to load up your Bench with Zorua, so that you can evolve them and begin attacking ASAP. A big difference between this matchup and others, however, is that against attackers such as Buzzwole-GX, you are almost certain to lose one or two of your Zorua before you can evolve them. Since sustained Zoroark attacks are key, and since you can likewise expect your opponent’s Fighting-type attackers to knockout your Zoroark as easily as they Knock Out your Zorua, you need to be able to recover those Zorua as quickly as you can. Rescue Stretcher is excellent for this matchup, and you will definitely need it. I also have a tendency to use Puzzle of Time early to recover Zorua and/or Rescue Stretcher, so that I’m not stuck in a scenario where I don’t have another Zorua or Zoroark to go to after my active gets Knocked Out. Make no mistake, if you get into that scenario, you will almost certainly lose.

As fast as possible, evolve into multiple Zoroark-GX (while leaving at least one Zorua), fill up your Bench to eight, and Knock Out your opponent’s attacking GX.

Given how easily any of the attackers in Buzzwole / Lycanroc can Knock Out your Pokemon, you might think that it would be best to disregard your GXs as much as possible, and focus on an attacking strategy utilizing your other Zoroark. Unfortunately, due to your deck’s reliance on Trade for draw power, this isn’t realistically possible; such a strategy will likely sputter at some point, especially after an N, or if your opponent plays around Foul Play by using Zygarde-EX or Landorus-EX. So, you should instead try and set up plenty of Zoroark-GX, while still having one Benched Zorua ready to evolve into the Foul Play Zoroark. One of the Zoroark-GX should be used as your first attacker, particularly if your opponent is attacking with one of their GXs. At this point, do everything you can to get out Sky Field and a full Bench; this will likely require Hex Maniac if your opponent has managed to play down Sudowoodo. (Thankfully, filling up your Bench isn’t too much of a challenge, as long as you have multiple Exeggcute ready to go!) Get the knockout and get down to four Prizes, but be fully aware that your opponent will almost certainly be able to KO your Zoroark-GX.

When they retaliate, they will likely also use this turn to utilize their Beast Ring and power up a Buzzwole-GX, either Active or on their Bench. Aim for their powered-up Buzzwole-GX, and KO it with your Foul Play Zoroark.

At this point, things will probably look bad. Your opponent will be ahead on Prizes, have one or more fully-powered Buzzwole-GX ready to go (in addition to their other attackers), and your board will look puny in comparison. This point will also be the one where you can start to turn around the game.

If possible, finish them off now, either by utilizing your non-GX Zoroark one more time, or by using Zoroark-GX and Hex Maniac to get around their Sudowoodo.

Alright, so “win the game” as advice might seem rather obvious. The reality is though, against this deck, you won’t have a ton of time to do much else. So, if you have the option of digging for the win, or a more conservative play that might buy you another turn, the former option is more likely to net you a positive result. Thanks to Octillery and Lycanroc-GX , your opponent will have plenty of ways around any disruption tactic you might use; the Hex Maniac plus Red Card combo is thus your best bet if you do find yourself needing to buy a turn. (That is, unless we add something else…)