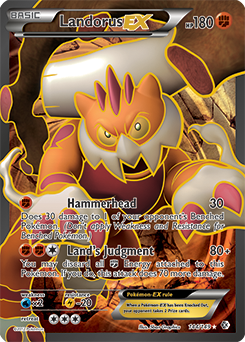 The past few months of competitive Pokemon have become staler than week old tortilla chips. Ultra Prism and the release of the Lucario-GX promo have minimally shaken things up, but the most viable archetypes haven’t changed since November. It’s a good thing Forbidden Light is about to drop and bust open a brand new bag of chips. To get the best flavor out of this new set, I’ve written a short review of what I think are the best cards in the set, the most underrated cards in the set, and the pitfalls. This review is followed by one of my favorite decks in the Expanded format: Lucario-GX / Landorus-EX.

Like its Lightning and Metal predecessors in the form of Eelektrik and Bronzong respectively, Malamar is set to make a big impact in this set. Energy acceleration is typically the most important factor in determining an archetype’s potential, and this effect has made a huge splash in the past. The most obvious partner for this card is Ultra Necrozma-GX that is coming out in this set, however I don’t really think that is the optimal partner as it requires two different types of Energy to be effective. Necrozma-GX only requires Psychic Energy and is therefore a much more effective partner.

Zygarde-GX, Buzzwole-GX, and Lucario-GX are predicted to be extremely strong in this upcoming set, and Diancie Prism Star further bolsters the early game pressure put out by the quick Fighting-type decks. As Zoroark-GX remains the most consistent and powerful deck in the format, Diancie Prism Star’s relevance cannot be understated.

I feel this set was well designed as the boost to Fighting archetypes is incredibly curbed by Malamar and Mysterious Treasure. While Mysterious Treasure is not Dive Ball, it does give the option for Psychic and Dragon decks to reduce their search cost by a single card. Mysterious Treasure in these decks can replace Ultra Ball as a four-of staple and make it a supplemental search card. In Malamar-based decks it might be better to still play heavy counts of Ultra Ball as you play out of your discard.

Although this is limited to a one-of in any deck, it alone can turn the tide of the game in any deck featuring Ultra Beasts as the main attacker. Like Strong Energy, Beast Energy Prism Star takes single-Energy attacks over the threshold to put pressure on the other side of the table. As strong as it is, it is still a Special Energy, so it’s weak to decks featuring Enhanced Hammer that makes it irrecoverable by sending it to the Lost Zone.

Since Furious Fists, Fighting-types have received an incredible amount of support. Zygarde-GX cannot abuse Strong Energy as other Fighting decks can, but it has self acceleration and a GX attack that ensures that it will be able to live long enough to swing a second turn. Since Diancie Prism Star, Regirock-EX and Choice Band are available in the format, Zygarde-GX’s swings are nothing to scoff at. I think the best way to play this deck is with heavy counts of Max Elixir, Zoroark-GX and Professor Kukui.