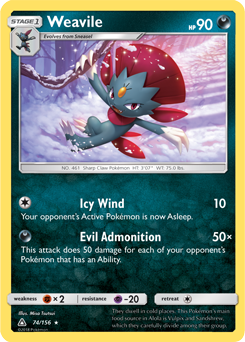 Hey Beachers! Today I am going to be talking about one of my favorite cards to come out of Ultra Prism: Weavile. I love this card because it becomes more powerful when your opponent utilizes more Abilities. Any time you can punish your opponent for playing powerful cards is incredible, because it puts them in a position where they either play into your strategy or play sub-optimally in an attempt to avoid it. More importantly, the card has strong synergy with Zoroark-GX which has defined the entire metagame.

Today we are going to take a look at a few different takes on the deck, what makes them unique, and how this deck fits into the metagame. It has several very strong matchups, but like anything else it does have a few weaknesses that have to be addressed.

First up is the list crafted by the Limitless team from across the pond in Europe. This list managed to take 2nd place at the Malmo Regionals, with two more players piloting the deck to Top 32 finishes in Malmo, and a Top 32 finish in Collinsville. 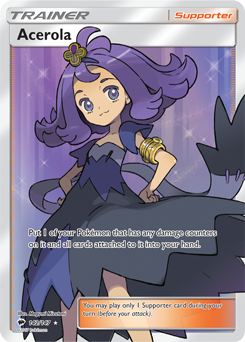 One of the first things you may notice about the deck is that it plays only a 2-1 line of Weavile. The primary focus here is still very much on Zoroark-GX while Weavile is only used to take pivotal Knock Outs when needed. We do also have Rescue Stretcher and Puzzle of Time to retrieve Weavile from the discard, so we are not completely limited to attacking with it once, but it does make streaming Weaviles turn after turn exceptionally difficult.

As mentioned above, this deck is still strongly focused on Zoroark-GX, which means it is focused on taking two-hit KOs. In order to keep that strategy viable, we need to pick up Zoroark-GX when it has taken some damage. The second Acerola in this deck means that we are not merely using it as a way to occasionally prevent a Knock Out, but to actively deny Knock Outs.

This list is starting to look a lot like a traditional Zoroark-GX deck isn’t it? Two copies of Enhanced Hammer helps immensely against other Zoroark-GX decks, especially against Lycanroc-GX which requires multiple attachments. It is also a huge help against any Buzzwole-GX deck since it allows us to knock off any Strong Energy our opponent attaches.

This card is going to be included in almost every Zoroark-GX deck from here on out, but it is still worth mentioning. This is currently the strongest counter for Buzzwole-GX. It allows us to hit for Weakness and easily take a Knock Out against Buzzwole-GX, and can frequently survive another turn. Buzzwole-GX is generally capable of efficiently hitting between 30 and 80 damage for one Energy, or hitting huge 200+ damage attacks for a whopping three Energy. Unfortunately for Buzzwole-GX, it does not have a good middle-ground. The only two Fighting Pokemon that can easily hit the 120 damage needed to Knock Out Mew-EX for less than three Energy are Lycanroc-GX (using its GX attack) and Sudowoodo. If your opponent does not already have a Sudowoodo on the field with an Energy attached, this means they can usually only return the Knock Out if they manage to get a Sudowoodo, play a Max Elixir, hit a Fighting Energy off of the Max Elixir, and have the means to retreat into Sudowoodo. On top of that, if you attacked with Zoroark-GX‘s Riotous Beating, your opponent also needs a full Bench to hit 120 damage by copying your attack, or replace any missing Bench spaces with either a Strong Energy or a Choice Band. You should usually expect your opponent to take a return KO on your Mew-EX, but it will take some considerable effort. On the flip side, you took your Knock Out with a Basic Pokemon and a single Energy attachment.

Oranguru is primarily a counter for all of those nasty Stall/Mill decks. Since we no longer have Bunnelby in Standard, we do not have an easy way to infinitely recycle cards back into our deck. New to Ultra Prism, Oranguru gives us the means. One cool feature of Oranguru is that it specifically puts the cards on the bottom of your deck, making them much harder for your opponent to mill. That is a double-edged sword however, since it also means we cannot immediately access those cards.

Next up we have the Weavile list piloted by Adam Hawkins at the Malmo Regionals. He piloted this deck to a 1st Place finish, beating out the Limitless deck in the finals. This deck has a stronger focus on Weavile and a stronger focus on Zoroark, even including multiple copies of Zoroark BREAK. Let’s dive into the specific card choices. 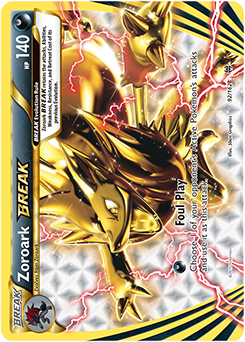 This is an interesting evolution line. By playing two copies of Zoroark and two copies of Zoroark BREAK this deck is really putting a focus on them. Mind Jack and Foul Play are both incredible attacks, so this leaves the deck with some powerful attackers. My concern with this focus is the hidden cost of evolving a Zorua into any card that is not Zoroark-GX. The reason Zoroark-GX has become such a powerful and important card in the meta-game is because it has such an incredible Ability. This deck and every other Zoroark-GX deck succeeds primarily because it benefits from the draw and consistency that Trade provides. Any time you forgo Zoroark-GX and Evolve into Zoroark instead, you give up that draw power. You generally won’t notice that the turn you evolve, while you will notice the one big attack that Zoroark afforded you. A couple turns later, that extra draw starts adding up quickly. As a result, I am skeptical about shifting any focus away from Zoroark-GX.

This list is more focused on Weavile than the Limitless list, but this is still only a 2-2 line. Unfortunately Weavile’s attack does rely on your opponent to ramp that damage up, which means it is not perfect for every matchup.