PokeBeach’s February 2018 PTCGO Tournament is over and the winners have been crowned!

Seventy-seven players competed for the title in this exciting monthly event, with the top eight players facing off in a top cut. The tournament was played in the Standard format at the time the tournament began — BREAKthrough through Crimson Invasion.

This month’s tournament was won by Sethy79! He will be shipped eighteen packs free of charge, courtesy of TCGplayer.com!

I don’t play much in person. I mostly go to pre-release events and play PTCGO. I did attend one Expanded League Cup with my son and was obliterated. I don’t think I’m cut out for Expanded…

I try to play all of the PokeBeach tournaments. They are a great service to the TCG community, and I always enjoy meeting new players along with the chance to test out my decks in some real competition. 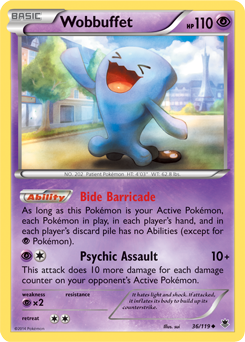 Why did you play stall? Were you considering any other decks?

I ran into a stall deck playing the VS ladder a while back and liked the idea. I couldn’t see a deck list from my opponent, so I put together my own list based on the idea of that deck. After playing it a bunch on the ladder and tweaking it until I felt comfortable, I played it in the January tournament and came in 11th. My only losses came from a similar type stall deck where the flips were not with me (I think I had 10 tails in a row at one point) and a Greninja BREAK. I realized that the meta was ripe for my kind of deck (low Energy counts, lots of Ability-focused decks, limited Supporter recovery options). Since nothing much was changing for February, and I didn’t have any other favored decks, I thought I might make a good run of things if I could avoid the frogs.

You went from eighth seed to first place. Nice job! Were you intimidated at all?

I was intimidated throughout the tournament. Having a strong record meant I was constantly getting better players as things progressed. I kept thinking, “Well, this has been a good run. I wonder when I will hit a wall”. Once I made it to the Top 8 (barely) I figured I would run into a deck that had my number, but the quarter finals and finals were both Zoroark-GX / Golisopod-GX decks that were favorable for me. I knew my deck could handle most of the biggest decks in the meta so I just tried to stay calm, make smart moves and be patient through it all. Still, I know that I had a few lucky plays. Also, coming in 8th made things much better because if I had been matched up with [2nd seed] Pengwin I would have been out immediately!

Why didn’t you run the standard 1 Lightning Energy to use Lighting GX? Did you ever find yourself wishing you had it?

I’ve seen the videos and the deck lists that run the Lightning Energy. Honestly it just wasn’t part of my strategy. I really only kept it in the list as an auto win condition for anyone who accidentally played Special Energy on all of their attackers. I think that worked out well for me in my first or second game, but beyond that Xurkitree-GX was more of a hindrance than an asset. Being a 2-Prize Pokemon that is weak to Fighting caused some scares when it was my starting Pokemon. Using up another slot on a Pokemon I’d rather not use for most games just didn’t make sense to me.

Wobbuffet was an interesting addition. Were you ever worried that opponents could take prizes off his low HP?

This was actually the core card of the entire deck. I usually prayed right before my opening hand that I would start a Wobbuffet. I played two Vikavolt / Tapu Bulu-GX, a Gardevoir-GX, and four Zoroark-GX. Having Wobbuffet Active and only Wobbuffet on the Bench helped me control those games so much better. Limiting all of the Abilities (except for Tapu Lele-GX which was mostly fine) slowed the games down and gave me much more time to put things in my favor. I actually cut out all of my Hoopa from January except for one so that I would be more likely to open with Wobbuffet. Of course it was sad that Zoroark, Tapu Bulu and Golisopod could all Knock it Out pretty easily, but with Puzzle of Time and Rescue Stretcher I almost always had a good supply of Wobbuffet to force my opponents to [Knock Out six of them] to win. Usually before they got there I had eliminated all of their Energy or run their deck out.

You only lost five games in the entire tournament. Can you talk about them? Is there anything you could have done differently to swing those games in your favor?

I can honestly say that in 3 of those losses I just had a rough start. I couldn’t get Energy denial cards out quick enough and my opponent got a Bulu set up with manual Energy attachments in one game. It was a losing proposition at that point as he was only one attachment away from another Knock Out. I think he wiped my two Wobs out in succession and it was a game. In the semi-final it was just about the same way. I lasted a little longer, but I just wasn’t able to get any of the cards I needed out and lost after three Pokemon got Knocked Out. The other two losses came from a Sylveon-GX stall deck. Being able to search out any three cards each turn puts my deck to shame in a head to head match up and I just couldn’t keep up. I definitely think my deck is a stronger choice in where the meta was at overall, but head to head Sylveon will always beat me I think. I can’t think of a way that I could have play that match up better to eke out a win.

The semi-final round was the most intense. I played a standard Gardevoir type deck. That is one of the more challenging matchups for me because of Twilight GX, but it is winnable if I am patient and careful. It’s always difficult to see all of the hard work at denying Energy go down the drain with that Twilight attack. My opponent was very smart and knew just the right time to Twilight and what to take out. The first and third games went down to one Prize. Counter Catcher, Mount Lanakila, and only playing one Pokemon on the field (to nullify Guzma) helped win the games, but boy they were so close. He also had some difficult draws that gave me a chance to win too. The second game was one of the times I dead drew and just couldn’t get my plan working before my opponent got set up and cleaned me out with Gallade.

I took out all of my Fighting Fury Belt from January to February to add another Plumeria, a Gladion, and a Team Skull Grunt. I’m happy with those choices, but I think at least one or two FFB would have been helpful to keep my Wobbuffet alive for more than one attack from Zoroark or even Gallade. The Giratina I teched in for Greninja BREAK ended up being a dead card the entire tournament, but I wouldn’t take it out for fear for facing the frogs and not standing a chance without it. Likewise I added two Regigigas for a tanky Basic Pokemon. They [were] only useful once or twice, but both times I did use them it saved the game for me. Otherwise, I am glad I had everything I did in the deck in general.

I’m interested in to replenish Lusamine so that I am more likely to get them out or to be able to pull two Supporters with a Lusamine without having to do the loop right away. I’m not sure my deck is still relevant with the new decks that recycle Energy or are more turbo in nature though. I’ll keep playing the VS [ladder] to see how I stack up, but I might have to give up the deck idea for awhile unless I can be sure it is still viable.

A big F for Julio for not taking home the gold this month, but at least he made Top 8 (again)! Nice work!

Kevin, Robert, Olen, and Julio will all be seeing a huge increase in prizes because they are premium subscribers. You can see how many packs each of them earned at the top of this page. The deck lists of second, third, and fourth place can be seen below:

March’s tournament is currently underway. Each tournament awards up to 7 booster boxes of product to top finishers plus promo products and additional booster packs to premium members. The prizes for premium members are bigger than ever before, so don’t miss your chance to play in the next tournament! Signups for April are scheduled to be posted Thursday, March 29th. Mark your calendars!