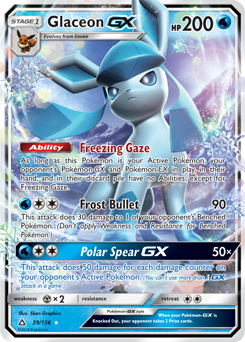 Hello all! We’ve had an exciting few weekends! Ultra Prism is now officially part of the competitive Pokemon format, and after Regional Championships in Collinsville, Malmo, and Salvador, as well as special events in Santiago and Guayaquil, we have a much better picture of what the Standard format will look like going forward. We’ve seen multiple new archetypes thus far, including the debut of the much-anticipated Glaceon-GX and Magnezone / Dusk Mane Necrozma-GX. However, even among all the new, older decks continued to dominate, with strong representation by past favorites such as Zoroark-GX / Golisopod-GX, Buzzwole-GX / Lycanroc-GX, and even the resurgence of decks such as Espeon-GX / Garbodor. With all this, we continue to see the evolution and growth of the Standard format.

So, what do we have to look forward to facing in upcoming League Cups and Regionals? Read on, and I’ll give you my analysis of this new format, a recap of Collinsville Regionals, what decks to look out for (both new and old!), and my predictions for the future of the BKT-ULP metagame.

Thanks to the great work of RK9Labs, we have a ton of data available about what was played at Collinsville Regionals. Not only do we have the deck lists available from the top 45 players, we also have information about the meta share of each deck; that is, how many people played each deck in the tournament. From this data, we can see not only what did well, but which decks over performed, under performed, what was popular, and what “hyped” decks failed to show up.

In contrast, newer concepts were ultimately disappointing. Just as Crimson Invasion and Shining Legends shook up the format with the debut of Pokemon such as Zoroark-GX, Buzzwole-GX, and Silvally-GX, Ultra Prism was expected to change things around as well. Going into this weekend, there was wide discussion on these Ultra Prism concepts. Glaceon-GX, Leafeon-GX, Magnezone, Dusk Mane Necrozma-GX, Alolan Dugtrio, Garchomp / Lucario, Empoleon, and Weavile were all anticipated to see some play, and players had to test and account for all of them. As it turns out, however, while Ultra Prism seemed flush with strong Pokemon, it’s clear after this weekend that none of them were able to have the same level of effect on the meta as those from previous sets. Indeed, of the 46 decks that made day two in Collinsville, only nine contained any Pokemon from Ultra Prism at all. Of those, most used only tech Pokemon such as Weavile, Pachirisu, Oranguru, and Dawn Wings Necrozma-GX; only three decks revolved around an Ultra Prism Pokemon (Zack Martin’s Dusk Mane Necrozma-GX / Registeel / Garbodor deck, Andrew Wamboldt’s Glaceon-GX / Garbodor deck, and Kevin Baxter’s Passimian deck). The results in Malmo showed only a bit more success for the new set, with ten of the Top 32 decks utilizing Pokemon from Ultra Prism, while only one of the Top 8 from Salvador could say the same.

However, the format didn’t remain completely stagnant! In Collinsville and Malmo, three decks – Zoroark-GX / Weavile, Garbodor, and Volcanion-EX / Ho-Oh-GX – had strong performances and popularity not seen in the BKT-CRI format. Two of those decks (Zoroark and Volcanion) took advantage of new cards (Weavile and Dawn Wings Necrozma, respectively), while Espeon-GX / Garbodor was expected to do well by way of a new, more favorable meta. Likewise, Gardevoir-GX decks seemed to collapse as expected; while the prevalence of Gardevoir-GX was about the same as decks like Vikavolt / Tapu Bulu-GX and ZoroPod, it did not have as much success, only notching two day-two spots in Collinsville, three in Malmo, and being shut out entirely in the three South American tournaments.

The contrast between the success of newer and older deck concepts isn’t entirely surprising. Many times when a new set is released, the “safer” play ends up being the familiar one, particularly when the preexisting decks are relatively strong compared to the new ones. This ended up being the case in the opening weekend – while plenty of people did try new concepts, the majority stuck to tried and true variants of existing decks such as those mentioned above.

There are several advantages to such an approach. First, the deck construction for preexisting decks is already well established; people know how to build a Buzzwole deck, or a VikaBulu deck, and so on. Only slight changes then need to be made to account for new cards (such as Cynthia) and to adapt for newly expected decks. In contrast, someone building a Magnezone deck would have to do so more or less from scratch, and thus many such decks will end up with sub-optimal lists.

This disparity in deck construction is important to recognize going forward. While some concepts may have flopped initially, that will not necessarily remain true, particularly as the deck lists for those new concepts get refined. So, even if a particular deck had a seemingly poor play-to-placement ratio, that may not be important if the well-made decks of that variant ended up doing well. In contrast, if a deck failed to perform at all, that may be a warning sign for a lack of playability going forward.

In the case of this format, however, results from Santiago and Salvador seem to confirm the early results. Each of those tournaments did see a Dusk Mane Necrozma-GX deck reach the Top 8, showing some signs of life for that concept. However, Zoroark-GX and Buzzwole-GX decks remained dominant in both tournaments. The strongest indicator from the South American tournaments, however, may have come from the Santiago special event, where first and second place both got captured by Volcanion decks. While the rest of the results seemed more or less predictable based on the results of the earlier Regionals, the Santiago result shows that Volcanion, and Fire decks in general, have earned a reliable spot in this meta.