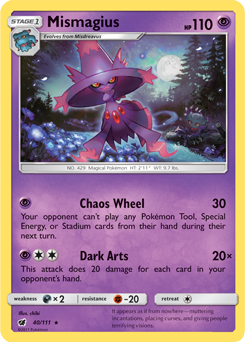 Trick or treat, PokeBeach! I know that the holiday season has just passed, but recently I’ve been feeling more ghoulish with my deck construction. I was looking for something spookier than the norm to surprise everybody in Dallas with, and since it’s Expanded I couldn’t be more ecstatic to begin my search for the scariest deck I could find. When creating an Expanded deck, it’s always good to go back in time and revisit cards that may have been missed — sometimes, cards get better over time due to some sort of metagame shift, or a certain breakout deck. In today’s Expanded metagame, we have three menaces to worry about:

Many people are knowledgeable on Zoroark-GX and Night March, but aren’t aware of how big a splash Wailord-EX will make at Dallas. I’m almost certain that many people are going to play it based on how many times I’ve seen the words “Tropical Beach” show up in private group chats. For anybody who doesn’t know, Wailord-EX is one of the few decks in the Expanded format that utilizes this Stadium card, so one can only expect to see a larger showing of it at the next tournament. In order to combat these three beasts of Expanded, what can I call on? Let me tell you readers, you might want to get a bowl of popcorn, because this article is going to be a juicy one.

Initially, I began testing Seismitoad-EX / Giratina-EX in an effort to counter all of the Special Energy hate. I knew that this deck couldn’t handle Wailord-EX’s high HP, but it would put a dent in so many other decks that it didn’t matter. I figured that not everybody could have Tropical Beach at Dallas, so I’d face less Wailord than Zoroark-GX and Night March combined. Seismitoad-EX is a fantastic Pokemon in the Expanded format because of all the Item cards that are reintroduced — especially the ever-so-vital VS Seeker. Some decks can get completely locked out of the game by a simple Quaking Punch, which makes this deck an instant hit. I was worried about the Gardevoir-GX matchup, as well as Energy denial. Energy denial decks could prevent my Seismitoad-EX from attacking, and Giratina-EX may never land an attack if our opponent plays Enhanced Hammer or Xerosic in a timely manner!

I quickly scrapped the deck. I needed something similar to Giratina’s Chaos Wheel, but not as vulnerable. The deck also couldn’t be too vulnerable to the Energy denial that Wailord-EX usually plays. I was running out of ideas, so I began to look at what other top players were working on, when suddenly I came across a concept developed by my friend Phinnegan Lynch. He loves to develop rogue decks, and this one really struck my eye when I saw it, posing an interesting solution to all of my problems. While he released the concept for the Standard format, I was able to change it into an Expanded version. Here is my rendition of Mismagius / Garbodor!

This deck is centred around manipulating the opponent’s options. Mismagius does a great job of this by preventing our opponent from playing Pokemon Tools, Special Energy, as well as any Stadium cards. The only Trainer cards our opponent can play at that point would be either Supporter cards or Item cards — and if they play enough Item cards, it’ll fuel up Garbodor’s Trashalanche attack in a pinch! This deck seems like a jaw buster to me!

I was excited upon paralleling the initial concept of this deck because I know that Standard is facing similar problems to Expanded: Special Energy decks are taking over, and Giratina-EX is too slow in order to capitalize on it. Mismagius assumes the role of Giratina-EX in this case: it has the same attack as its predecessor, except it is a Stage 1 Pokemon who can attack with just a single basic Energy. While this deck doesn’t do anything inherently strong on its own, it is extremely good at reacting to things done by the opponent, and capitalizing on any action that they may perform during their turn. It’s a soft lock deck, not an aggressor!

This Garbodor is the powerhouse in the late game — once our opponent has realized they can only play Items and Supporters, they’ll be throwing them in the discard pile like they’re going out of style. Cards like Field Blower and Choice Band help us to improve this damage output really fast, alongside our opponent who will do the same. It’s one of the best attackers in the Expanded format!

This Garbodor is necessary in the Expanded format because it is able to shut down a wide variety of Abilities that may come our way. Garbodor can shut down things like Greninja BREAK’s Giant Water Shuriken, Volcanion-EX’s Steam Up, Gardevoir-GX’s Secret Spring, or even Hoopa’s Scoundrel Guard! Garbodor helps us establish an essential part of our lock by restricting valuable draw power in the form of Zoroark-GX’s Trade Ability. We also play four copies of Float Stone to ensure mobility.

We play two of these Trubbish so that in the Night March matchup, if they have any outs to Chaos Wheel, we have an efficient attacker to combat them by abusing their own Dimension Valley. We also play two Garbage Collection Trubbish in order to recycle random resources, such as Enhanced Hammer or Field Blower. Their varying HPs can help in random matchups as well.