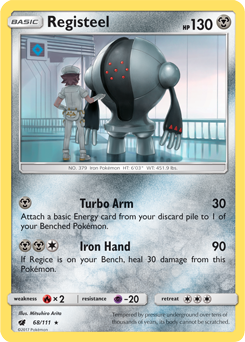 Top of the morning guys! While everybody has been spending time at work, I’ve been spending time at the ‘Beach working on a surprising rogue-ish deck. With every new expansion lies some new cards that are able to exploit an entire format, and in the case of Crimson Invasion and Shining Legends, there are a couple of cards that are able to do just that.

In my search criteria, I wanted something that could handle Gardevoir-GX, Golisopod-GX, Volcanion-EX, and Greninja BREAK. With that in mind, there’s quite a few bases to cover! The best way to exploit numerous decks are through techs that usually can hit Weakness — and with techable attackers, you can bet that in order to maximize consistency we’ll be using Basics.

After researching lot of the new cards, one of them really caught my eye: Registeel. Being a Basic Pokemon with solid typing against Fairy-types, we pose a massive threat to Gardevoir-GX decks! We’re also packing an attack that accelerates Energy, which means that we can power up a backup army of attackers waiting in the wings. A deck like this has a ton of potential because of how versatile it is — but how can we keep momentum going in this deck? This required a ton of brainstorming, but after working on this deck with one of my students I coach, we were able to bust out a list with some of the best attackers available. Below is the blueprint list we began testing:

Arguably one of the craziest and most creative decks I’ve constructed, this deck handles the entire metagame in a nutshell in numerous ways! It has a few problems that we will discuss, but first let’s talk general strategy.

The strategy with this deck is to initially use Registeel to accelerate Energy, and then sacrifice the first Prize card to the opponent; falling behind is our goal, and we usually never want to take the first KO. We’ll then proceed to utilize whichever attacker is most effective against our opponent with the use of Counter Energy! Counter Energy allows us to keep tempo against heavy Pokemon-EX / Pokemon-GX decks, all the while giving us outs to make a comeback at nearly any point of the game. Talk about a wildcard!

Now I want to briefly detail each of our attackers and go over which ones are most effective in which matchup. Some have multiple uses, while others are just generally “go-tos”. 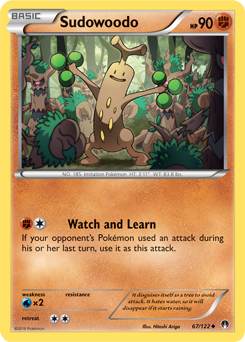 Sudowoodo is an absolute all-star! Being able to copy any attack, it is insanely useful with a single Counter Energy. I usually use Sudowoodo the most out of every attacker in the entire deck because it can match the damage of EXs/GXs outputs all within a regular Basic Pokemon. I tend to hold Sudowoodo in my hand and then surprise my opponent with it whenever applicable.

A Psychic-type Sudowoodo. The main reason we play this card is to hit a different kind of Weakness, otherwise I’d rather just play a second Sudowoodo. Keep in mind, Mimikyu can’t copy GX attacks!

Mew is a beautiful free retreater, which allows us to pivot our Active Pokemon at all times following a KO from our opponent. Mew acts as a doppelganger for our onslaught of attackers, all the while providing a Psychic-type attacker similar to Mimikyu.

Our super hot fire blaster, Reshiram helps us turn Golisopod-GX into a marshmallow. This Pokemon can be played around sometimes since our opponent has so many Guzma, but I feel that Counter Energy and precise timing will allow us to use Scorching Breath for OHKOs. This Pokemon can also OHKO a Metagross-GX handily.

Being one of our only Metal-type attackers, this is a great splashable card in here! Cobalion shines in the late game when our opponent has taken many Prize cards, allowing us to hit for ridiculous numbers.

Keldeo is our flash-in-the-pan attacker against Fire-type decks, mainly Volcanion. I kid you not, even in non-Fire matchups I find myself using this seahorse all the time! 120 is nothing to scoff at for a single Counter Energy, and it usually comes out of nowhere.