Hey PokeBeach! The past month has been extremely exciting. The World Championships showcased how powerful and influential the Burning Shadows set truly is, with both finalist decks being based around Pokemon-GX from the set. The interesting combination of Garbodor and Golisopod-GX to output fast damage as soon as possible paired with Ability lock lead to a second place finish for Japanese player Naoto Suzuki. The addition of Rainbow Energy meant that the Trashalanche Garbodor could also be included, providing an excellent late-game partner if your opponent had to play high amounts of Items down to deal with the onslaught of damage from Golisopod-GX.

Even with all that pressure and Ability lock from Garbotoxin, Suzuki still fell to the crazy power of Gardevoir-GX. Right from its initial Japanese reveal, it was obvious this archetype would make a splash. Gardevoir-GX’s Infinity Force deals just 10 damage less than M Mewtwo-EX‘s aptly named Psychic Infinity, which already had a good showing in the past two years. Pair that with being able to attach an extra Fairy Energy for each Gardevoir-GX in play and an awesome GX attack that severely dampens Garbodor’s Trashalanche, and we get a Worlds-winning formula. 2017 World Champion Diego Cassiraga’s deck doesn’t have too many tricks up its sleeve, but is there any need for trickery when Gardevoir-GX is so powerful?

In this article we are going to look at how these decks hold up going into the 2017 – 2018 season, as well as what cards leave the Standard format.

Now that Worlds 2017 is over and done with, it’s time to look towards 2018. I’m pretty hyped about next year’s location for Worlds — Nashville is a unique place unlike any other place the Championships have been held in before! European invites this year are the lowest they’ve ever been for Masters, at 250 Championship Points. No one is sure of the reason that brought about this reduction from 350 CP last year, but it does mean a possible increase in European players for Nashville, which is always great to see.

For myself, gaining a day two invite is the goal this time round. I was able to obtain a top four at Liverpool Regionals playing Drampa-GX / Garbodor / Zygarde-EX, netting 130 CP before the season truly begins. With travel awards and stipends to places like Australia and South America for the International Championships, it seems like an awesome idea to go for it this year.

Moving to the American side of things, the points have also been reduced to 400 Championship Points instead of 500. It looks like Pokemon are going for a larger day one of Worlds this year, after only having six rounds for Anaheim.

What We Lose in Rotation

Moving past structure, let’s look into what’s really important — the format! We lose Primal Clash, Roaring Skies, Ancient Origins and Double Crisis moving into the 2018 season. From Primal Clash we lose the commonly played Teammates, which makes it harder to search for specific pieces of a puzzle straight after your opponent takes a KO. Silent Lab was used in decks to provide a soft Ability lock, which could stop Tapu Lele-GX or Volcanion-EX from using their Abilities. Dive Ball was a centerpiece of Greninja BREAK decks, since the entire Greninja line was searchable. Rough Seas was great in Waterbox builds or Alolan Ninetales-GX decks to heal damage so that it became awkward for opponents to hit correct numbers. The majority of EXs from the set have lost their playability, however Primal Groudon-EX did see play due to its Ancient Trait, Ω Barrier.

The biggest loss from Roaring Skies is VS Seeker. Many players have never played a format without this card in rotation, since it was released three years ago in Phantom Forces. In these three years, the majority of decks had an architecture for Supporters based around VS Seeker. This usually consisted of three/four Professor Sycamore, two/three N and two or more one-of utility Supporters like AZ or Hex Maniac. With this build, decks could easily access draw support when needed after a Supporter had hit the discard, along with a utility Supporter to gain an upper hand in the game (such as picking up a Pokemon or stopping Abilities for a turn). Jirachi-EX and Tapu Lele-GX made it possible to search out the specific Supporter you wanted early on with Ultra Ball, which could then be re-used when needed by VS Seeker. Without this crucial card, we will need to modify and create new Supporter archetypes to give a similar effect to what VS Seeker could do. This mostly means playing four copies of specific cards, and bumping utility Supporters from one-ofs to two or three counts.

Roaring Skies housed a lot of important cards, but the most influential Pokemon has to be Shaymin-EX. Up until the release of Guardians Rising, Shaymin-EX saw play in almost every deck to provide extra draw throughout the turn that could be searched with an Ultra Ball and used alongside a Supporter. Fast decks became a centerpiece for a year, where decks could easily draw through 20 or more cards on their first turn. With the recent release of Trashalanche Garbodor, this fast strategy became undesirable due to the high amounts of Item cards played to get this quick setup.

Coming in a not-too-close second, M Rayquaza-EX saw a ton of play with its rule-breaking Δ Evolution Ancient Trait and an insanely powerful attack. Paired with Sky Field for an extra three Bench slots and Mega Turbo for the Energy acceleration, Emerald Break was always an attack players were scared of. Other mentions are Latios-EX for its turn one attack to try and donk evolution decks, and Absol as a solid way to manipulate damage counters on your opponents’ field. Reshiram and Hydreigon-EX provided solid support for Dragon-type Pokemon. Finally, Double Dragon Energy made Dragon-type decks viable, as the majority of their attacks have some wonky Energy costs that need two different types of Energy. Without Double Dragon Energy, Dragon-type decks will become less viable in the meta, though the painful Fairy Weakness every Dragon-type Pokemon has is a large negative anyway thanks to Gardevoir-GX.

Ancient Origins brought us the first Trainer card to cause full Ability lock: Hex Maniac. When Pokemon with strong Abilities like Decidueye-GX and Volcanion-EX have a stronghold on a format, decks that can’t afford to fit a Garbotoxin Garbodor can fit in one or two copies of Hex Maniac. As a utility Supporter, this card sometimes matched Lysandre for its usefulness and impact in a game. Hoopa-EX was a strong Pokemon when EX-heavy decks saw large amount of play. Mega Evolutions like M Sceptile-EX and obviously M Rayquaza-EX needed multiple EXs to get a good setup, so Hoopa-EX helped these decks out tremendously. Item lock has always been a part of the Pokemon TCG, and Vileplume combined with Forest of Giant Plants provided a simple turn one lock if you were able to find the pieces. Without Vileplume in the format, Item lock-based decks may be nonexistent; the best lock Pokemon, Noivern-GX, is weak against Gardevoir-GX, which doesn’t seem to be leaving the meta anytime soon. 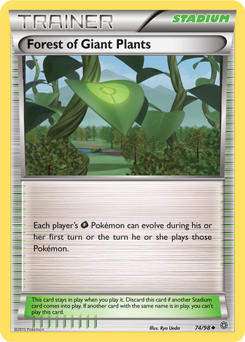 Speaking of Forest of Giant Plants, Decidueye-GX was purely powerful based off this rule-breaking card. It wasn’t uncommon to get a turn one Decidueye-GX while easily following up with one or two more in the next couple turns. Feather Arrow damage stacks up quickly when you’re dealing 20s from the very first turn. Without Forest, Decidueye-GX has to be put into play using normal means like Rare Candy or even manual evolution. This will slow the deck down a huge amount compared to the past year, and could even spell the end of Decidueye decks in the metagame for a while. Compared to other Stage 2 GXs being released, Decidueye just doesn’t cut it without the speed factor of Forest of Giant Plants.

Vespiquen decks had chunks of play and even won the U.S. Nationals in 2016. Although the archetype hasn’t had much success recently, this one-Prize attacker always packed a punch once enough Pokemon reached the discard. Gyarados, who also originated in Ancient Origins, saw success once Choice Band was released, due to its powerful Full Retaliation attack. The three different types of Eeveelutions (Jolteon, Vaporeon and Flareon) played roles in many Stage 1 decks, and were a big part of why Espeon-GX / Garbodor had success early on, making it possible for these two Stage 1 Pokemon to hit Decidueye-GX or Volcanion-EX for Weakness. Stage 1 decks might have a harder time hitting numbers without these three in the format.

Coming to the final couple of cards, Level Ball played a part in so many decks. It’s easy to forget how good this card is, as so many playable Pokemon and pre-evolutions have 90 HP or fewer (take Rowlet and Dartrix or Remoraid and Octillery for example). Without Level Ball, decks will have to look for other types of search cards, such as Nest Ball or Timer Ball to get their Pokemon into play consistently. To finish off we have Lysandre. Although mostly overshadowed by Guzma at this year’s Worlds because of its extra switch effect, Lysandre was nearly always a one- or two-of in decks since its release in Flashfire. It looks like one thing’s for sure though: each format will always have some sort of Lysandre effect from now on.

After its huge win at the World Championships, Gardevoir-GX is the obvious candidate for a deck in the new Standard format. If we look at Diego’s list, there are only six cards that rotate out of the format. However, the four VS Seeker removed from the deck need to be replaced with other draw support cards. Here is the list I’ve been working on: