Hey, PokeBeach denizens! John Kettler back with another article — but this time it’s somewhat different. Since this is an article slated for release very shortly after the World Championships, I figured the best approach would be to log some of my preparations for you all.

Today’s article includes a comprehensive log from August 1st to August 16th, and an epilogue of sorts recounting the pros and cons of my preparation. Each entry has some sort of purpose in bettering our games, so it should be a fun, engaging, and varied set of ideas for you! They might also include a couple neat concepts you can incorporate into any future Expanded tournaments you may attend.

After some earlier preparations, I wrote up a lengthy matchup chart that shows how 15 of the format’s most important decks are predicted to do against each other. That chart revealed to me what I already know: 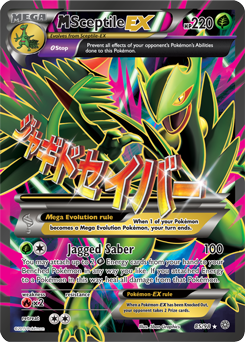 Thus, it comes to zero surprise that Decidueye-GX is my number one play for Worlds, easily. This comfort and security in my most reliable deck of 2017 gives me latitude to mess around with different ideas. Today was all about that.

One strategy I’ve since adopted is to focus primarily on beating five heavily-played decks: Garbodor, Decidueye-GX, Greninja, Volcanion, and Gardevoir-GX. With the new Vileplume coming out, which blocks Basic Pokemon from attacking, an alternate idea to simply playing Decidueye is to test a M Sceptile-EX / Vileplume anti-meta deck. Here are some of the pros:

At this point it appears that the deck loses to Gardevoir-GX. I’m at a loss as to how to fix that, but four of five is great.

For better or for worse, I’ve decided to base the majority of my post-Burning Shadows testing on Pokemon Trading Card Game Online. Thus, the testing for this new concept is beginning a set behind –not ideal, but certainly not a waste of time because I need to get the basic build down first. Here’s what I currently have…

This list already deals out nicely (for the most part), but changing it for Burning Shadows is a piece of cake since I can cut:

After talking a bit with my good friend Ryan Soles, we’ve found that this deck might also have a lot of Weaknesses outside of the “big five,” such as M Rayquaza-EX, Golisopod-GX / Eeveelutions, and Vespiquen / Eeveelutions.  Is there some other “anti-everything” deck I could use instead, which employs more or less the same ideas but with greater efficiency?

Brief profile on Ryan Soles — He’s pretty much my oldest friend in competitive Pokemon TCG. He’s gotten invited to Worlds a couple times, and is a great deck builder/theorist in his own right, but he simply doesn’t travel the “circuit” like people addicted to the game might. Still, he enjoys following and testing the game regularly, and currently treats it as a sort of social activity to enjoy with his buds in Chicago.

At this point I’m daydreaming about decks, and Solgaleo-GX / Solgaleo  / techs has entered my mind. No deck exploits the card pool from Burning Shadows more in my opinion, and he seems to agree. At around the same time, we move towards running Metal and Rainbow Energy, but for different reasons — me because I want more techs than Jolteon-EX, and him for Diancie. We both agree it’s a good call however, and so the new the idea to replace my barely-untested tech deck is born.

I extended the talks with another one of my long-time TCG confidants: Alex Fields, a Texas player with a good reputation of his own. He brought me down to Earth a bit by reminding me that, yes, Jolteon-EX is somewhat countered by Turtonator-GX and Shell Trap. He also asked for a list, and at that point I knew that both for your and my benefit, it was essential to draft it up…

This was actually a carryover idea from a few months back, but now it’s much stronger for a lot of reasons. The most obvious is the metagame: Solgaleo with a hard Volcanion counter has good matchups against nearly every major deck in the format, in theory, at least.

Today is the first day of Burning Shadows being available on PTCGO. While I am still waiting on the two booster boxes I purchased, I’ve fortunately opened and/or traded for all of the new cards needed to make this idea work, so I can actually deal out some games with this! Today I returned to an old, strange idea, which was Lapras-GX.

Here is the list I used for games two and three. I unfortunately forgot the list for game one.

Lapras-GX doesn’t pull weight like it used to, so I later decided to just streamline the deck into a Glaceon-EX build. I played and got crushed by three of the big five, but with a little tweaking I think I can fix those matchups. 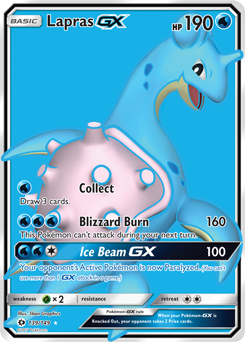 Meanwhile, I soundly 4-0 top tier decks with a very-slightly modified Decidueye-GX / Vileplume list. It was the same as my North American International Championship list, but with the following changes:

I might give my Waterbox monstrosity another shot tomorrow, but those are some sorely disappointing results.