The competitive Pokemon TCG season is now a constant week-to-week drama with major tournaments happening all the time. However, as Anaheim showed us, the most dramatic shifts in the decks and techs don’t always happen right away. Now that people have had a chance to see how major a change each Sun and Moon expansion is creating on the current PRC-on format, will the past repeat itself? Today we’ll discuss both the old and new decks we’ll see at Seattle Regionals next weekend. I’ll also discuss the best way to approach the post-Guardians Rising format, some projected top decks going into Seattle, and of course some ultimate recommendations on what to play.

The State of Standard’s Finest

If you could characterize with one phrase the conventional wisdom headed into Anaheim three months ago, it would be “play what’s already winning.” While that turned out to be sound advice for that particular tournament, Decidueye-GX and then later Lapras-GX would warp the format so badly, the early adaptors of those decks would find themselves greatly rewarded. What would have happened if more people caught on to those decks as soon as Sun and Moon became legal?

Because both of those decks had a chance to shake up the format, I’m convinced that more people will be prepared for and expect Guardians Rising’s stars to do well as soon as Seattle. Decks we’ll discuss below, such as Garbodor and Sylveon-GX, are already on people’s radars as major threats, so the response to those decks will be much swifter than responses were to Decidueye and Lapras, which were written off by many people as novelties when they first came out.

So, given what we know now about how important Decidueye and Lapras were in the grand scheme of things, we ask ourselves the same question players asked themselves when Sun and Moon first came out. Do you play it safe and update an old deck, or do you risk it with a new concept?

To shed some light on that issue, let’s think of Standard as a 3D puzzle, with different sides shifting depending on how other parts move. Likewise, it’s important to consider how Standard’s top decks shift thanks to Guardians Rising.

Lapras-GX is outclassed in the tank department. Sylveon-GX, which we’ll discuss in detail later, achieves the purpose of disruptive tank deck much better than the current Lapras build. It has more HP, an arguably more game-changing GX attack, and above all else, a search attack instead of a draw attack. This combination makes it the clearly superior disruption deck, which is the type of build that went on to win Roanoke Regionals.

Lapras still has a couple saving graces, mostly in that it’s harder for Hex Maniac or Silent Lab to get in the way of setting up. However, between Sylveon’s release and Aqua Patch making an aggressive Water deck somewhat viable, it might be time to repurpose this card as an attacker.

Decidueye-GX is changing in some interesting ways, but is at risk for extinction. I still love Decidueye, and it goes toe-to-toe with most of the new cards. It also benefits directly from previous hate decks either going down in usage due to the metagame’s confusion, or to playing more Items — something Vileplume loves to see. The inclusion of Tapu Lele-GX is also a huge boost in combating Wobbuffet-lock variants. Unfortunately, Sylveon-GX looks to be a tough matchup for Decidueye, and so while it will remain to be a strong play for the rest of the season, Decidueye may be at risk in the early format with Guardians Rising legal.

Volcanion is clearly a better play than previously. Turtonator-GX is an incredible inclusion and Field Blower helps shake off popular Ability-lock. Now you just need to be sure that you can handle emergent Aqua Patch decks, the Lapras-GX variants carried over, and Grant Manley’s Amazing Technicolored Mirror Coat.

M Rayquaza-EX is better in a metagame not focused on beating it. Rayquaza certainly doesn’t like to see the new Sudowoodo outranking Sky Field in the Bench size war, but this is actually a very specific inclusion not all decks can make. Therefore, its viability as a deck choice skyrockets when players are busier chasing after shiny new threats like Garbodor or Sylveon-GX, or are playing one of those two decks. It also doesn’t hurt that Field Blower makes it much easier now to combat Parallel City, or that Tapu Lele-GX makes the dreaded Hex Maniac chain easier than ever before. I’m not thrilled about lower-key threats like Tapu Koko-GX potentially obliterating Rayquaza, but a field of old decks or Sylveon could prove to be a good day for a Metal / Rayquaza list.

Turbo Darkrai-EX is at the mercy of Field Blower. Darkrai’s consistency may not be touched at all by Guardians Rising; however, the heart of Darkrai’s ability to hang on until the long game depends on Fighting Fury Belt keeping you safe from one-shots, and Exp. Share keeping your Energy supply secure. Now that we finally have Tool removal in the Standard format, Darkrai can’t safely bank on either of those cards. 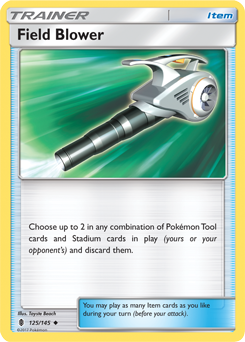 Yveltal is also at the mercy of Field Blower, but for different reasons. The heart of Yveltal / Garbodor’s most disruptive combo, Garbotoxin plus Parallel City, is now at risk because Field Blower has the potential to stop both at the same time.

Gyarados is much stronger, but still at the mercy of Decidueye-GX. Getting Choice Band and Field Blower is a big deal for everything, but it’s perhaps the biggest deal for Gyarados. That’s because up until now many bulky Pokemon-EX decks have been out of range for Full Retaliation, thanks to high HP and/or Fighting Fury Belt, but no longer! Nevertheless, Decidueye destroys Gyarados almost as badly as it did before, so if you want all of the juicy matchups that Gyarados has to offer, then you have to time playing it carefully. Given how messy the metagame will be these next few weeks, Seattle could be a great opportunity for Gyarados.

M Mewtwo-EX is definitely not as safe as before. In the final PRC – SUM Standard Regional of the year, Mewtwo was the most successful deck on average, and I don’t think its good matchups are going away. Yet because Mewtwo depends so heavily on Items — Spirit Link, Mega Turbo, and Trainers' Mail — Garbodor is going to be an uphill battle. Luckily, you control how many Items go into the discard pile, so careful control of those mentioned cards may edge out enough games to make this deck a decent surprise play. But at this point in time, Mewtwo only has more road blocks in its way than before.

M Gardevoir-EX is overall much better than before. I’m not the first person to cite Oricorio (Guardians Rising #55) as a good way to avoid missing Energy attachments, but the real heart to the newer, better Mega Gardevoir is Tapu Lele-GX virtually guaranteeing your Hex Maniac chain every game. Hex Maniac has a wide variety of applications for most matchups, so being able to assure drawing into it is a big deal. And since most lists run a below-average number of Supporters in the first place, it’s nice to have a new out to all of your draw, search, and refresh cards.

There are plenty better choices, but Vespiquen is not as dead as you’d think. Just like Sudowoodo with M Rayquaza-EX, Oricorio (Guardians Rising #56) has the potential to ruin a Vespiquen deck, but only if your opponent is actually running it. That’s because in the early days of Guardians Rising, people won’t quite be sure what to tech against, and are therefore a lot more likely to run Oricorio as an afterthought. That might allow a small window of opportunity for Vespiquen to do well again, especially since it reaches KOs much easier now thanks to Field Blower and Choice Band.