PokeBeach’s February TCG Cup is over and the winners have been crowned!

The tournament was played in the Standard format at the time — Primal Clash through Evolutions.

Our winner from last month, Serperior, was able to win his second tournament in a row this month! Because he is a premium subscriber, he will be shipped 2 booster boxes from TCGplayer.com!

What is your real name?

Where are you from?

The Cincinnati area. Shouts out to the 513.

Eh, since we last talked I played in a couple of League Challenges. Won one, got second at another. Played M Mewtwo-EX though.

It’s free, it supports PokéBeach, it’s good practice, there isn’t a reason to not participate. I mean, unless you have a family and a real-life job. In which case take care of yourself and those that depend on your ability to make money before you devote time to a children’s card game. 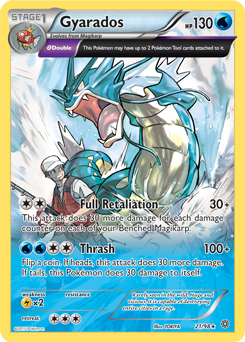 So if you’re good at scrolling down you’ll find that I played Gyarados. I looked at the meta, saw a lot of Turbo Dark, Bees, Mega Mewtwo, Yveltal-EX, and thought… hm. What beats or at least goes 50/50 with these? The big blue fish thing himself.

Anything with 220 HP is a pain in the neck. This means Darkrai-EX with Fighting Fury Belt, some of the Megas, and…yeah. Oh, Giratina-EX too. One Chaos Wheel and I’m done. Vespiquen can be difficult because they also hit with one-Prize attackers, but with a cute late-game N and picking off a Shaymin-EX or two, you’ve got a shot. On the other hand, anything with 210 HP or less is right in Gyarados’s wheelhouse. He can swing for that if you max out your Bench with damaged Magikarp and you usually go up on the Prize trade this way.

Yeah, so there’s a bit here:

That last round was insane, but round five had its merits too. I’ll explain both. Round five I’m up against normanc and I see the Glaceon and I’m immediately regretting life. I don’t play CARD NOT FOUND in my list because of how situational it is, but I know I can still win this matchup even though Crystal Ray is a thing. I tech an Enhanced Hammer and all I needed for him to do was whiff a Crystal Ray…and he does. I’m able to win game one that way. Game two he kinda dead draws and I end up hitting everything from a Professor Sycamore, Escape Rope-ing his Active Glaceon and taking my last two Prizes from something on the Bench. Escape Rope and Enhanced Hammer are the real MVPs.

The final round against gracebond was insane. When he flipped over the Scizor-EX, I got upset. Two Mega Scizor builds in two consecutive final rounds. What do I have to do to dodge Scizor? Did nobody play Volcanion-EX?

Anyways. Game one. Even though I get set up and stuff, he drops the surprise Absol mid-game with that Cursed Eyes Ability to Knock Out one of my Magikarp. He doubles up on Prizes in a turn and gets ahead in the Prize trade this way. My Meowstic-EX is no where to be found so I can’t OHKO a Mega. That one Absol alone was my undoing in game one.

Game two he dead draws and I was perfectly fine with it.

Game 3 I’m drawing suuuper dead in the beginning, with a Meowstic stuck Active. He’s got a Mega Scizor Active and one Benched, and I mess up and use Shadow Ear on the Active Mega. I ended up Sky Returning that Active Mega, meaning that extra 10 was kinda useless and would’ve been better off on the Benched one to put that at 210 range. Really bad. After letting him take a Magikarp for a Teammates play, I finally get stuff on the board and take my first Mega Scizor and pair of Prizes. After a couple turns, there was a point where he needed just an Absol and a Lysandre for game. I had a Shaymin Benched and plenty of damage for him to manipulate for a Cursed Eyes KO… but it never came. There were two turns when I was on the edge of my seat, waiting for the three-Prize sweep for game. He Sycamores instead, continues to take Gyarados Knock Outs, even gets an Absol (but still no Lysandre) and brings it to four Prizes to his one. I play only one N in my list. I discard two VS Seeker, Ultra Ball for my last Shaymin, do a whole lot of crazy stuff to ensure I can Set Up for six and hopefully into that N. I hit it. The N sticks in the fact that he can’t take another Knock Out, with his Absol already spent. He has no backup Mega Scizor after I take down the second, and he tries promoting the Absol to burn another turn where he could try attaching to a baby Scizor and Lysandre-ing a Magikarp for game. I Sycamore through my deck for the Escape Rope in which he is forced to bring up an EX. And that was game. It was craaazy.

I think this was as good as it was gonna get, for me. There are so many times I want to tinker with the two Acro Bike, but sometimes I really need to dig for that one card. And the Acro Bike gets me there.

Judging from Anaheim results, there’s a lot of Tina. And I don’t know how I feel about that. I think Gyarados is still strong if you can dodge those matchups, but… wow. There’s a lot of Giratina. I’m hoping M Gardevoir-EX makes a comeback because of the Giratina hype, but who knows.

Coming in 2nd, 3rd and 4th places were Zachary Duncan (gracebond), Harry Smith (WasedSkyPirate) and Aaron Roffman (My Little Keldeo). All three won a bunch of booster packs from the latest expansions, but Zachary and Aaron both got a huge increase in the prizes because they are premium subscribers. You can see how many packs each of them earned at the top of this page. Their deck lists can be seen below:

April’s tournament will be posted within the last week of March, and March’s tournament is currently underway. Each tournament awards up to 7 booster boxes of product to top finishers plus promo products and additional booster packs to premium members. The prizes for premium members received a huge increase too, so don’t miss your chance to play in the next tournament!